To find a binary
There are a number of methods to detect a binary system and calculate its orbital parameters. These measurements are very useful since you can then derive astrophysical quantities such as the mass, radius, and density of the stars. However, an individual technique may have associated biases that make any sample of binary systems unrepresentative of the true population. One example is the radial velocity technique which measures the relative wobble of one star as the two bodies orbit their center of mass or barycenter. Consequently, higher mass companions and small separation systems are much easier to detect and, voilà, we’re stuck with a bias. Developing new techniques and checking that all the methods produce consistent results for the same system is critical.

The light-travel time (LTT) technique utilizes the finite speed of light to measure the periodic behavior of the binary system and constrain the orbital parameters. The idea is fairly simple, but requires one key element: a pulsating star. The observed phase oscillations traces the motion of the star as it moves along its orbit and its distance to us changes in a periodic fashion. Here’s a simple analogy: suppose I mail a letter to my Mother every Friday without fail. The US Postal Service takes three days deliver so she can look forward to my letter every Monday. However, if I were to go to London every other week and continue to mail every Friday, my Mother would no longer receive a letter every Monday as International Mail takes longer to deliver. Similarly, the observed signal from a pulsating star will change if it is in an orbit. To find these variations astronomers commonly plot O–C diagrams which show the difference between the observed (O) and the calculated (C) signal as a function of time. In an O–C diagram an orbit should appear as a periodic signal (see below). This method has been applied to binaries as well as planets, but systems with consistent LTT and RV measurements are rare. 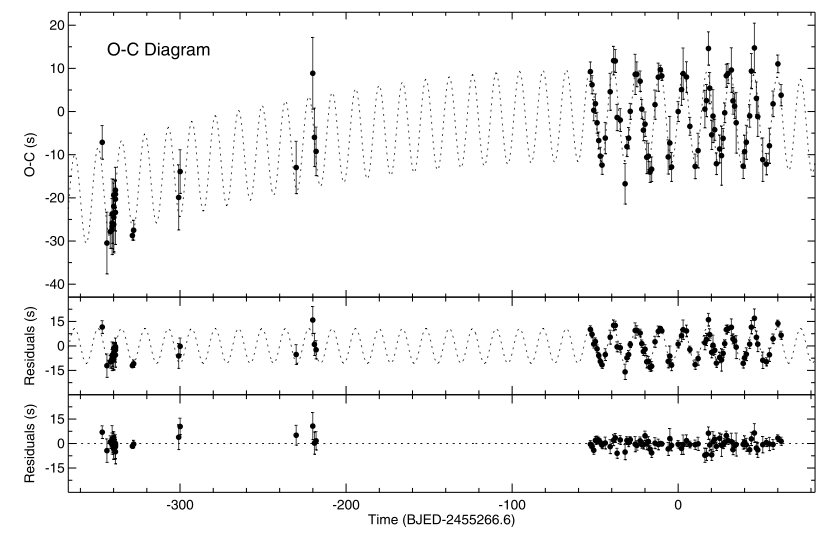 The hot subdwarf B star CS 1246
Hot subdwarf B stars (sdBs) are thought to be evolved stars on the extended horizontal branch that have managed to lose most of their Hydrogen shell. The LTT analysis of the sdB CS 1246 used 500 hours of photometry spread over 14 months with an observed phase oscillation period of 14.1 days (read the paper here) that could be attributed to a low-mass companion (>0.12 solar masses) orbiting CS 1246 at a distance of about 20 solar radii. Following this analysis, this paper used spectra taken from the 4.1-m SOAR telescope to measure the wobble induced by the companion. The actual radial velocities (e.g. the wobble) were calculated by measuring the induced Doppler shift to H Balmer lines as well as cross-correlating the entire spectrum against a template. At the end of the day the RV curves agree very well with the LTT analysis (see below)! The ability to find sdB stars in binaries has implications for understanding how these stars may have lost their Hydrogen shell. One possibility is that a companion stripped away the mass and so the expectation is that these stars will be commonly found in binaries.

RV curve for CS 1246 folded on the predicted period. The dashed and dotted lines show the LTT prediction and the best fit sine wave. (Figure 2 from the paper)