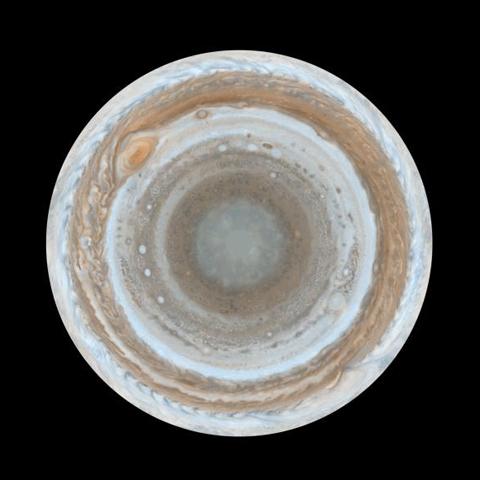 A different view of a familiar object: the south pole of Jupiter as mapped by the Cassini spacecraft during its flyby of the planet. From NASA/JPL: http://www.jpl.nasa.gov/spaceimages/details.php?id=PIA07784

In much the same way as seismologists use earthquakes to study the Earth’s interior and moonquakes to study the Moon’s interior, astronomers use seismic quakes on astronomical bodies to learn about their structure.  Helioseismologists look at seismic waves on the Sun, while asteroseismology extends these techniques to other stars.  However, the waves astronomers study are different than those on Earth.  Terrestrial quakes are disturbances tens to hundreds of kilometers into the Earth, most commonly due to energy release along tectonic plates, that propagate to the surface.  Starquakes are thought to be the result of turbulence in the convective zone and cause the entire star to ring like a bell.

In this paper, techniques from asteroseismology are applied to yet another object: Jupiter.  Because Jupiter is largely a fluid, like the Sun, astronomers have expected it to show global seismic behavior since the mid-1970s; the signal was even theorized to be about the same magnitude as solar oscillations.  However, attempts to detect Jupiter’s global oscillations in the 80s and 90s were largely unsuccessful, even while the field of helioseismology was taking off.  The problem is that to detect the oscillations using Doppler spectrometry, high spatial and high velocity precision are needed because of Jupiter’s rapid rotation.  In Doppler spectrometry, you measure the periodic redshift and blueshift (Doppler shifts) of a spectral line as Jupiter’s surface “breathes” in and out.  Because Jupiter rotates so rapidly, a small error in the pointing of your telescope could mean a large change in the measured Doppler shift that would be confused with the true signal.  Rotation also broadens the spectral lines, making it more difficult to detect small changes.

With SYMPA (Seismographic Imaging Interferometer for Monitoring of Planetary Atmosphere), these issues are addressed.  I’ll forgo the details of the instrumentation, but you can read about them in the Schmider et al. (2007).  The team first observed Jupiter with SYMPA in 2005 when its configuration was best – in opposition (reflected light is used, so Jupiter needs to be fully illuminated) and in the northern sky (that’s where the instrument is) – but did not detect any oscillations.  Conditions were not ideal again until January 2011: a long wait!  After assessing instrumental noise, possible contributions from solar oscillations (since observations are of reflected sunlight), and surface inhomogeneities (“Jupiter is a complex and dynamic planet,” state the authors), the team detected a signal.

The authors argue that the most probable cause of the signal they have found is acoustic, or pressure, waves.  The maximum frequency and the spacing between frequencies detected are consistent with currently-accepted (and relatively simple) models of Jupiter: a rocky core surrounded by metallic hydrogen with a dense, primarily hydrogen and helium atmosphere.  However, this is just the beginning.  A space-based mission would relieve the effects of Earth’s atmospheric turbulence and allow more continuous observations.  With such data, we might be able to probe Jupiter’s interior – and the structures of the other giant planets – in more detail.  The questions that the authors hope will be answered include: How big is the core?  What metals are present?  Where do phase transitions occur?