With the number of known exoplanets growing by leaps and bounds, planet formation is a hot topic these days. One of the keys to understanding how planets form is understanding their environment, the dusty debris disks around young stars. (See Ian’s astrobite for a great review of protoplanetary disks.) The key to detecting a debris disk is the amount of dust it contains – the more dust, the brighter the disk will be, and the more likely we are to observe it. However, the mechanisms by which disks generate and lose their dust are not well understood, and the number of observed debris disks around nearby stars is still too small to provide reliable statistics. Therefore, the authors of today’s paper have attempted to answer some of these questions using a combination of n-body simulations and analytics. In particular, they seek to discover how close encounters with nearby stars can strip a star of its debris disk early on in its life. 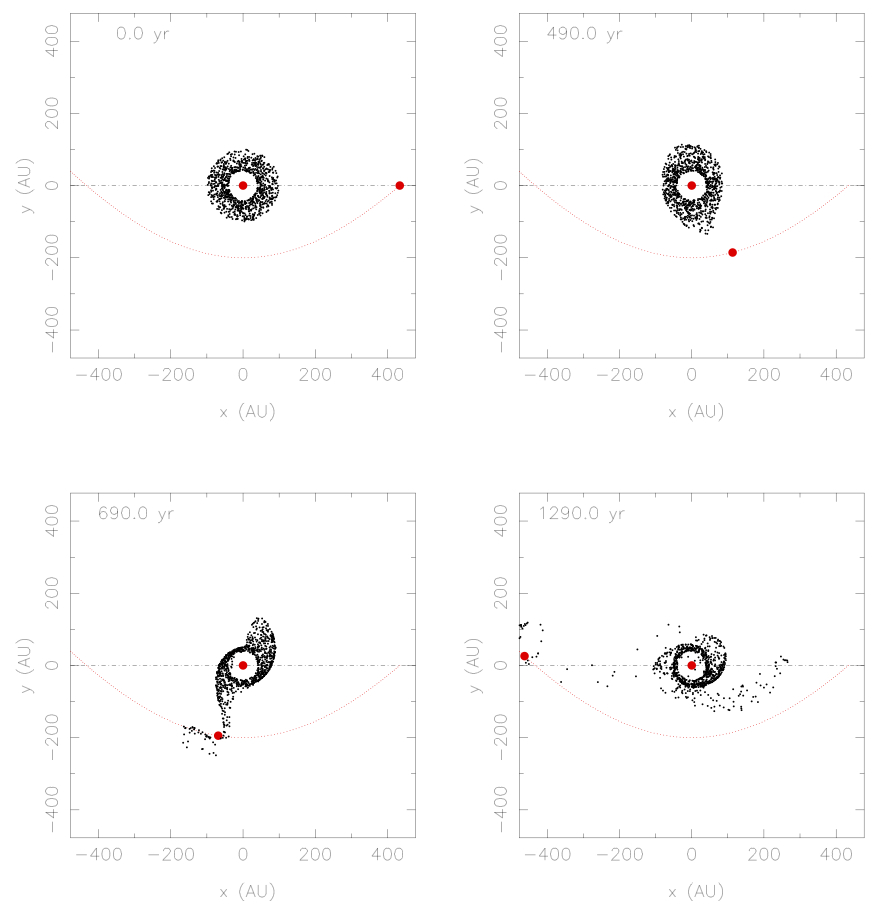 An example of a typical flyby from the n-body simulations.

Many stars (including our sun) are born in a relatively crowded environment called an open cluster. In such an environment, close encounters with other stars are quite common. To see what effect a passing star might have, the authors run a series of n-body simulations in which a star flies past another star surrounded a debris disk containing 10,000 massless particles. (The authors use massless particles to form the disk because the mass of a planetesimal is negligible compared to the two stars in the problem. A weakness of this method is that their disk is therefore not self-gravitating.) An example of a typical flyby is shown in the figure above. A number of parameters in the simulation are varied to represent different types of encounters, including the relative masses of the two stars, the speed and trajectory of the passing star, and the inner and outer radii of the debris disk. From their n-body simulations, the authors get a reasonable estimate of the percentage of the debris disk that is lost as a function of the proximity of the passing star, for the various stellar mass ratios tested. This relationship is shown in the figure below.

This figure shows the percentage of planetesimals lost as a function of miss distance for the various mass ratios tested in the n-body simulations.

Once they have an accurate estimate of what each encounter does to a disk, the authors use analytic techniques to calculate how frequently encounters occur. Open clusters expand over their lifetime and dissipate within a few hundred million years, so the authors test a series of cluster environments whose density decreases over time. Their cluster environments range from the least dense clusters known, with ~100 stars per cubic parsec, through environments typical of those in which the sun was born (~3000 stars/pc3), to the densest nearby open cluster, the Orion Nebula cluster, with ~20000 stars/pc3.

This analysis results in the figure below, which shows the percentage of planetesimals lost in bins of stellar size, ranging from tiny M dwarfs to A stars twice as massive as the sun. The authors found that only stars in the densest environments (more than 10,000 stars/pc3) suffered significant disk depletion due to close encounters. In addition, the authors conclude that very compact disks are nearly impervious to flyby effects. 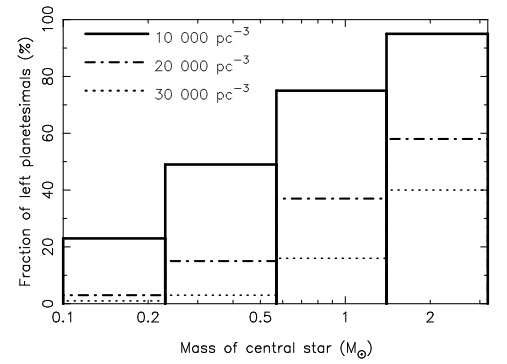 This histogram shows the percentage of the debris disk lost to stars of varying stellar mass in clusters with three different initial densities.

The authors estimate that about two thirds of Milky Way stars originated in such high density environments, and therefore have disks that may have been depleted by stripping. This is especially true of M dwarfs, meaning that not only will debris disks around M dwarfs be harder to detect relative to larger stars, but these smaller stars may be less likely to harbor planets, even when the relative total mass lf the system is taken into account. Thus, using relatively simple numerical and analytic techniques, the authors of this paper are able to make an important and testable prediction about debris disk frequency and planet formation.