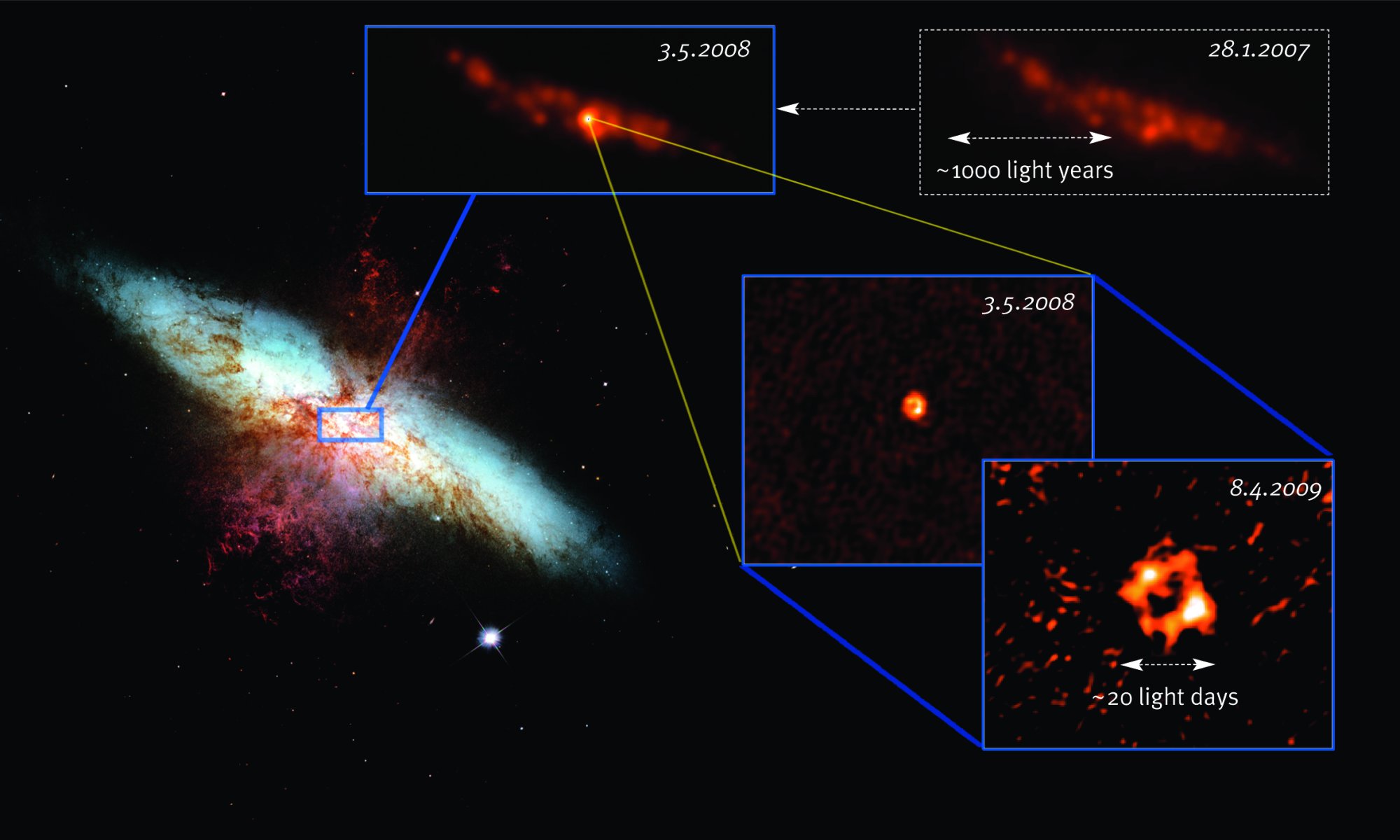 The Discovery
In May 2009 a radio transient of unknown origin was discovered in the nucleus of the galaxy M82 (see Figure 1). It was originally detected with the Multi-Element Radio Linked Interferometer Network (MERLIN), which was monitoring M82, and the discovery was later confirmed by the VLBA. Searching through 15-20 years of data on M82 did not turn up any other radio detection of this source, and it wasn’t detected in any other wavebands either previously or at the same time as the radio detections of it.

This non-detection in other wavebands makes this source very unusual. The authors of this paper examined the X-ray data taken from M82 and verified the non-detection — if the source were emitting in X-rays it would need to have a luminosity of less than LX ~ 1037 erg/s to be compatible with the Chandra observations of M82.

The Theory
There are currently three main explanations for what this source might be: a) an extragalactic microquasar, b) an AGN in the center of M82, or c) a radio supernova. The authors argue that the latter two explanations are unlikely. The source is unlikely to be an AGN since the supermassive black hole at the center of it would have to be significantly displaced from the dynamical center of the galaxy in order to match observations. Further, the source is too faint to be a Type 1 supernova, and its unchanging spectral index doesn’t fit with our expectations for young radio supernovae. The authors therefore choose to focus on the extragalactic microquasar theory. 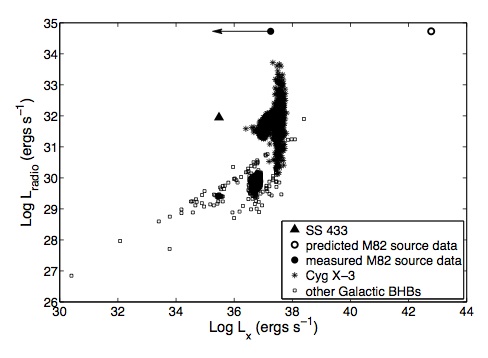 Figure 2: Plot showing radio/X-ray correlation for the hard state of black hole binaries (BHBs). Squares indicate galactic BHBs; the filled circle is the observation of the M82 source (with the X-ray upper limit shown); the open circle is the predicted data for the M82 source; the triangle indicates SS433 for comparison. Figure 3 in the paper.

The authors advocate that this source is indeed a microquasar located within M82. The source doesn’t behave exactly like a traditional microquasar, however, so to make this argument, they must address several concerns.

The first anomaly of the M82 source is that there exists a strong empirical correlation between X-ray and radio luminosities for black hole binaries … and the source in M82 doesn’t fit it (see Figure 2). The upper limit of LX ~ 1037 erg/s sits far below the X-ray luminosity of LX ~ 1041 erg/s expected for this source given its radio luminosity.

The authors address these concerns by suggesting that M82 may simply be a microquasar with unusual behavior — behavior analogous, in fact, to another unusual microquasar in our own galaxy, microquasar SS433. SS433 is is also relatively faint in X-rays compared to radio, and it exhibits a similar spectral index and a similarly small amount of variability in its light curve. And while the source in M82 has a significantly higher radio luminosity than SS433, this would make sense if it also had a more massive donor star than SS433’s 12 M☉ donor.

Conclusion
The authors determine that the recently-detected transient radio source in M82 could be microquasar in that galaxy, fed by a donor star with a mass greater than the 12 M☉ donor in the SS433 system. The authors conclude by noting that one way to confirm this theory would be to conduct follow-up optical observations of emission lines, searching for Doppler-shift spectral signatures similar to those seen in SS433.