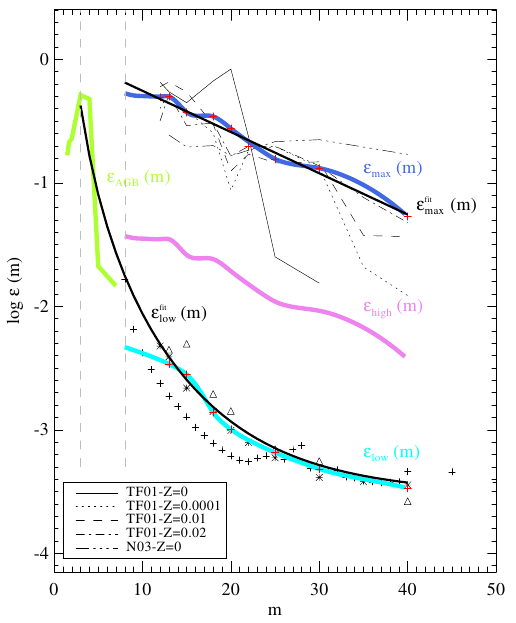 The theoretical efficiency of dust mass production (ε=dust mass/progenitor star mass) on average for AGB stars (green line) and SNe (other colors) as a function of progenitor mass, in solar units. The dark blue line represents the most dust we think SNe could possibly produce, while the cyan line is more in line with observations.

In their new review, Gall et al. consider the observed existence of very dusty (dust mass > 108 M☉) submillimeter galaxies and quasars at high redshift. At this redshift (z>6), the universe was less than a Gyr old and it was just a few hundred Myr after stars started forming. The authors address the question, “how did these galaxies get so dusty so soon?” Understanding dust is important, because we need to model the dimming and reddening effects of dust in order to interpret almost any astronomical observations.

The obvious culprit is core-collapse supernovae (SNe). We know that SNe can synthesize enormous amounts (of order M☉) of Ni and other heavy elements, of which astrophysical dust is composed. Applying models of dust formation (and lots of assumptions) to the conditions of SN ejecta has predicted that ~M☉ of dust should emerge within a few years of the explosion However, observations of attenuation in spectral lines or infrared emission from SNe suggests masses ~104x smaller.

Ian’s recent Astrobite highlighted these observational methods and discussed new work illustrating that, at least for some types of SNe, the progenitor star probably produces more dust than the explosion. Most stars don’t lose much of their mass, though, so they probably won’t contribute much to dust enrichment unless they have reached the Asymptotic Giant Branch (AGB) stage near the ends of their lives.

In the AGB stage, stars have degenerate cores of C and O that are no longer performing fusion, but they are burning He and H in shells outside of the core. Instabilities in this shell fusion causes thermal pulsation and radiation pressure to drive off the outer layers of the star in periodic bursts, causing them to lose as much as 80% of their total mass. These “winds” are enriched in heavy elements synthesized in the star, like SN ejecta.

However, it’s not enough simply to have heavy elements. Astrophysical dust particles have grain sizes of ~0.01-1 μm, and to grow to that size depends on a series of chemical reactions. Certain conditions (e.g. temperature and density) must exist in order for dust “seeds” to condense out of the gas phase and then serve as nucleation sites for grain growth.

So who is the more important dust producer in the early universe — AGB stars or SNe? To answer this, we need to know about the dust-production characteristics of these processes, and also their abundance in galaxies. The abundances are largely determined by the initial mass function (IMF). Today, the IMF is bottom-heavy (low-mass stars are more common), but in the early universe we think it was much more top-heavy. This is important, because a Gyr after the Big Bang, only stars with mass greater than ~3 M☉ will have reached the AGB stage — and only stars more than twice that massive will produce core-collapse SNe.

Unfortunately, the winner we pick is incredibly sensitive to our assumption for the dust-producing power of SNe (see above figure). If we adopt the prodigious dust-producing SNe of theory, they trounce the AGB stars. But if we believe our observations which tell us that SNe produce orders of magnitude less dust, they lose out. A more top-heavy IMF can help the SNe a bit, by making their massive star-progenitors relatively more frequent. Future advances in both theory (e.g. improving our understanding of mass loss in stars and the formation of dust grains) and observation (e.g. gathering more data on dust produced by SNe and galaxies at high redshift) will be required to settle the debate.