It comes as no surprise, then, that large-scale cosmological magnetic fields early in the Universe (or “primordial fields”), above a certain threshold, could influence structure formation and reionization.  The origin and strength of these fields is currently unknown, with many competing theories (see, for example this review).  But as in other fields of astrophysics, we can see the effects of magnetic fields even if we do not fully understand their origins.

Magnetic fields, above a given threshold strength, could induce baryonic density inhomogeneities of appreciable magnitude.  This, in turn, modifies the ionization history of the Universe, which depends sensitively on the typical density scales of cosmological structures.  The era of ionization is becoming more and more constrained by higher redshift observations, as well as Planck giving much higher sensitivity to inhomogeneities in the cosmic microwave background.  In this paper, authors Schleicher and Minianti make use of the latest constraints on reionization to attempt to constrain the possible strength of primordial magnetic fields.

The authors use the observed UV luminosity function at high redshifts (z ~ 4-8) as well as observations of a recently discovered quasar which indicates a neutral hydrogen fraction of about 10-4-10-3 at z ∼ 7.  The authors use these data to carry out a brief but insightful order-of-magnitude estimate of the maximum strength of primordial fields.

The authors begin by solving a differential equation (see Eq. 1 in paper) which determines the evolution of the volume fraction of ionized hydrogen, based principally on the following three quantities:

1. The star formation rate at a given redshift

2. The typical production of ionizing photons emitted by these stars (as well as the rough fraction of these photons that escape the galaxy or cluster in question).

3. The (comoving) density of neutral hydrogen

Next, the time-evolution of the recombination history (specifically the temperature and ionization fraction of the IGM as well as magnetic field strengths) of the Universe is calculated using RECFAST.  The authors then directly calculate the reionization optical depth–this gives an idea of how far an ionizing photon can travel before it ionizes a neutral atom– and ionization fraction (see figure below) as a function of redshift, for different magnetic field strengths. 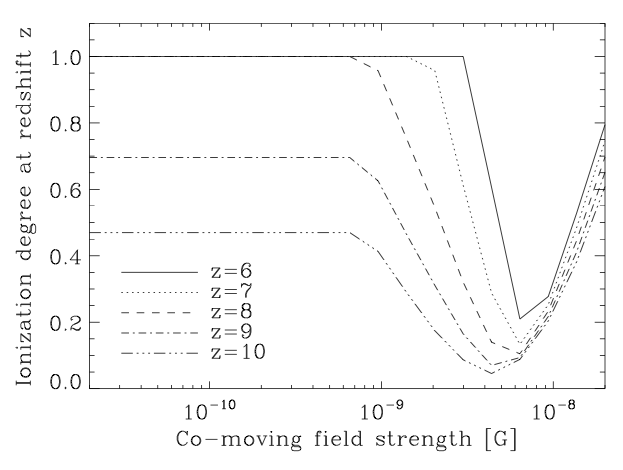 The ionization degree at different redshifts, as a function of the co-moving field strength. The cause for the dip is a competition between two physical effects. In the limit of small magnetic fields, more low-luminosity halos can contribute ionizing photons. In the limit of high magnetic fields, collisional heating between neutral and magnetized baryons causes a higher ionization fraction. However, around the nano-Gauss level, collisional heating is not yet significant and many low-luminosity halos cannot contribute ionizing photons, leading to a large dip in the ionization degree.

Comparing their calculations with observations, the authors find an overall constraint that primordial magnetic fields, at a redshift of ~7-10 (around the era of reionization), could have been at most ∼ 2-3×10-9 Gauss.  They end by remarking that their result is similar to that found by a recent analysis of CMB fluctuations based on different physics, strengthening the credibility of this constraint.