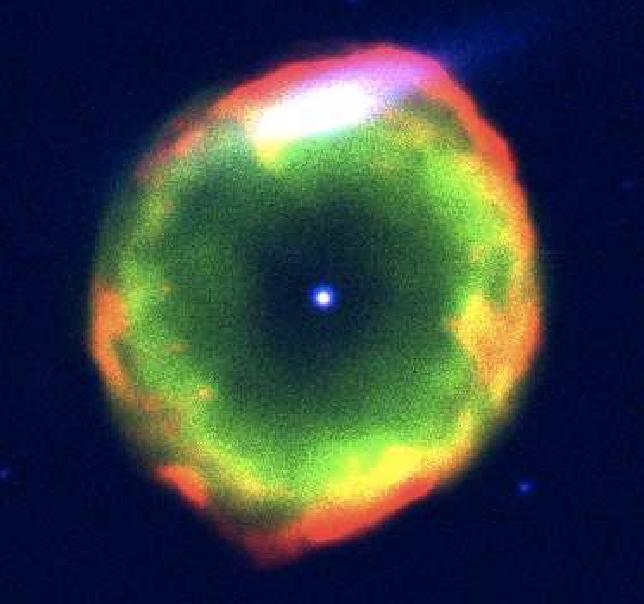 In a previous Astrobite, Ellie discussed the chemistry of planetary nebulae, the expanding shell of gas and dust expelled by stars a little more massive than our sun (but not massive enough to go supernova, i.e. < 8 M☉). For the first time, Miszalski et al. investigate the central star responsible for producing the planetary nebula Abell 70.

They find that, in fact, the central star is a special type of binary system, with only two or three known analogues. The central stars are a solar-temperature main sequence or subgiant star (G8IV-V) and a hot white dwarf (WD) companion. Features of the faint WD are not seen in optical spectroscopy, but the authors confirm its existence via a novel method: UV imaging indicates the presence of a companion much hotter than a red giant (see figure below). The authors are confident that these stars produced the nebula because they have the same radial velocity (spectral redshift).

The evolution of this binary system was influenced strongly by the formation of the nebula, and it falls in a special class referred to as “Barium stars.” Barium stars comprise ~1% of red (G-K class) giants, characterized by unusually high abundance of carbon and heavy elements such as barium that are produced by slow neutron capture (the s-process).

Because barium stars apparently always have WD companions, it is thought that the C and s-process element enrichment is due to pollution. In this scenario, both stars start out on the main sequence. Then the future-WD evolves to the AGB stage and dredges up C and s-process elements formed at its core via thermal pulsations. It then blows these heavy elements away, right onto the future-barium star. 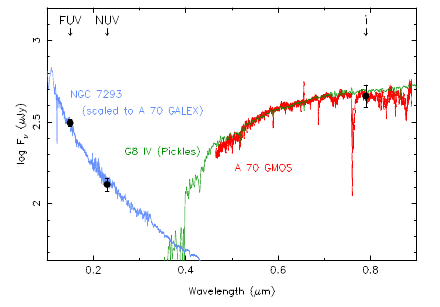 The spectral energy distribution (SED) of the central star of Abell 70 (red line, black points) has an excess of UV emission that requires the presence of a WD companion (blue) to the observed G8 subgiant (red). From Figure 4 of Miszalski et al. 2011.

Abell 70 and systems like it are important for a number of reasons. Not only can barium star systems produce intrinsically interesting planetary nebulae, but by understanding how they are formed we can learn more about stellar evolution in binary systems. The authors argue that they may also teach us about nucleosynthesis in AGB stars, which is important for understanding the chemical evolution of galaxies. They suggest that high-resolution spectroscopy be used to study the elemental abundances of the nebula in greater detail.