Where did the Milky Way Dwarfs come from?

In the current standard model of cosmology, galaxies form in giant dark matter halos that are roughly spherical. These halos are also predicted to have many sub-halos scattered randomly around them. Because these sub-halos are made of dark matter, we can only identify them if they have a large collection of stars marking their location. One major discrepancy between theory and observation is the difference in the number of observed satellite galaxies and the number of predicted sub-halos. One solution to this problem is that many of the sub-halos are just not efficient at forming stars or experience strong feedback that removes baryonic matter from the halo. While this solution helps push the number of visible sub-halos down to explain observations, it does not describe the spatial distribution of these remaining satellites. The cosmological model predicts that the sub-halos should be randomly distributed, but previous observations have shown that the Milky Way’s sub-halos don’t seem to be oriented that way. Instead, their distribution can be likened to an extended disk with a root mean squared thickness of only 10-30 kpc!

There are different ways to explain these observations. One argument is that the thin, disk-like nature of the satellites can be explained by an infall of a small group of galaxies that keep their correlated orbits; however, several authors have shown why this is unlikely. It is also possible that our proximity to Andromeda might have some impact on the formation of the Milky Way system. The theory the authors test in this paper is whether or not such an arrangement of satellites could come from an infall along a filament which creates a preferred orbital direction. By looking at the Milky Way’s satellites for which we know proper motions (with uncertainty of course), the authors try to wind back the clock and identify where the satellites could have originated from.

In order to do this, three things must be carefully considered.  One is an effect called dynamical friction. As a massive object moves through a sea of smaller objects, it creates an over-dense wake behind it.  This acts to slow the object.  Second is the Milky Way mass model. To do this the authors use a combination of two models used in other papers to come up with four models to test. Since they are testing the ΛCDM model, they assume an NFW profile which is how dark matter has been predicted and observed to be distributed through hierarchical merging. Finally, the real uncertainty lies with the proper motions of the satellite galaxies. The authors point out that four galaxies they study have large uncertainties in their velocities, and this has the potential to drastically alter the orbits. 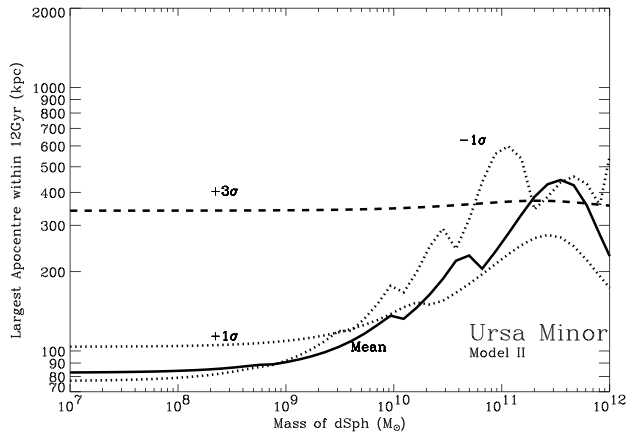 Largest apocenter of an orbit as a function of satellite mass for the Ursa Minor dwarf. The different line styles correspond to different proper motion velocities considered around the mean measured value..

After the analysis, it is found that the two key parameters that impact the past orbit of a satellite is its proper motion and its mass. The Milky Way profile actually turns out to be less important.  Of the four galaxies they studied, one had no chance of filamentary infall and the other three would need their velocities to be significantly lower than the observed mean and have total masses above 1010M☉. This mass is much higher than expected. To go even further, they consider the fact that the Milky Way has accreted matter over the past 12 Gyrs. During this the dwarfs remained bound at 5 Gyrs unless the proper motions are wrong at more than 1σ. Because the infall then must happen at very high redshift, it is unlikely the orbits would have been retained due to randomization over such a large intervening time.

Of the various ways to describe these orbits one of the most exciting is the application of certain modified gravity theories.  In these theories, cold dark matter is not invoked and gravity is boosted in regions of weak accelerations. This helps the situation here because then the satellites must be tidal dwarf galaxies.  If so, correlated positions and lower orbital velocities are expected.