The flat transmission spectrum of GJ1214b is best-fit by a model atmosphere dominated by water vapor. From Figure 10 of Berta et al. 2011.

Since we’ve already had two Astrobites on the ongoing efforts to characterize the atmosphere of the 2.7 REarth exoplanet GC1214b, I couldn’t let this new paper on the subject pass by without a mention.

In our April 13th Astrobite, Caroline described how this planet was discovered by MEarth using the transit method. She also walked us through the transmission spectroscopy method that allows astronomers to measure the scale height of a planet’s atmosphere at different wavelengths based on the depth of its transit as it passes in front of its host star. In our September 21st Astrobite, Lauren described how the density of the planet could be consistent with either a rocky core and hydrogen-dominated atmosphere or a watery-interior and water vapor-rich atmosphere. Lauren also showed off the latest preliminary results of transmission spectroscopy of the planet’s atmosphere, presented at the Extreme Solar Systems II conference. 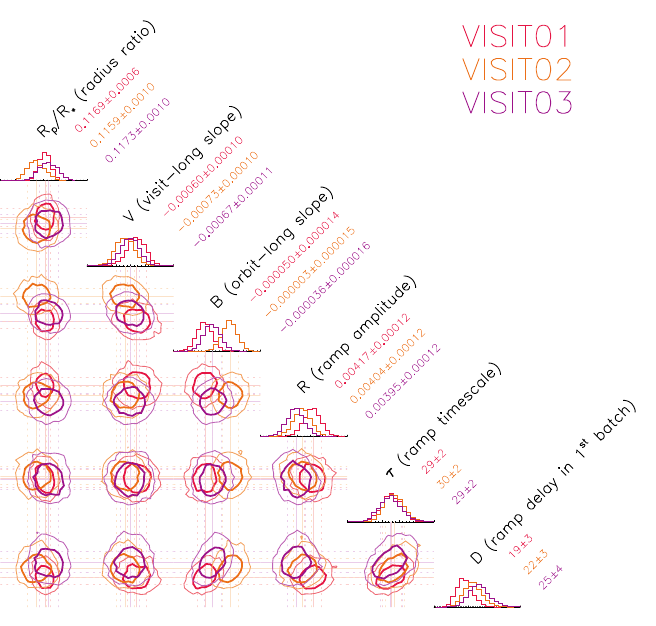 The final version of those results has just been released in a paper accepted by the Astrophysical Journal. Berta et al. report on HST WFC3 observations of the transiting planet. Their paper includes a very detailed analysis of the performance and systematics of the slitless spectroscopy mode of WFC3 that affect transmission spectroscopy. A laundry list of effects need to be considered, including stellar limb darkening and image persistence. The authors assemble a model accounting for each of these effects and see how the best-fit parameters of the model vary using MCMC methods. Over three different HST observations, the systematics parameters hardly change, meaning that they can be corrected for reliably.

If GJ1214b really is dominated by water, it would be surprising that it has been found within its star’s snow line. A planet forming at the position of GJ1214b should have been heated such that volatile elements like hydrogen reach their escape velocity and leave the planet. This might indicate that it formed at a larger radius and then migrated inward.