Today’s Astrobite was contributed by Warrick Ball, a graduate student at the Institute of Astronomy at Cambridge. Warrick’s has written two Astrobites previously. If you would like to contribute to Astrobites, please contact us!

It’s an exciting time for stellar astrophysics. Although we’ve had a basic and successful model of stellar structure since the latter part of the 20th century, there are many processes that are modelled either crudely or not at all. What’s worse, we’ve had little opportunity to constrain these processes. With the advent of telescopes like CoRoT and Kepler, that’s changing quickly. Although part of these missions is dedicated to detecting exoplanets, the highly resolved lightcurves can also be used to measure the vibrations in the stars, and they can in turn be used to determine interior properties.

This is the budding field of asteroseismology. Just as seismologists determine the structure of the Earth through surface vibrations, so asteroseismologists do the same for stars. There’s a pretty strong analogy with musical instruments. If you listen carefully to, say, a tuba, you can work out something about how it’s shaped and maybe even what it’s made of. Certainly, you can tell that it’s different from a flute!

A particularly interesting development came earlier this year when a series of high-profile papers in Nature and Science showed that some oscillations in the deep envelopes of red giant stars were coupled to vibrations in their dense cores. These mixed modes allow you to infer properties of the core. This is exciting. At the surface, the deep convective envelopes usually obscure any information about the core. You’d be hard-pressed even to tell if there was a neutron star in its place! Now, if we listen carefully to the envelopes, we can hear the cores.

In today’s paper, the authors take advantage of their new stellar evolution package, MESA, to predict signatures of a previously obscure phase in the life of a stars less massive than about 2 M☉. Once such stars run out of hydrogen in their cores, the nuclear reactions shift to a shell around the helium core that becomes increasingly degenerate. That is, the atoms are packed so tightly that there aren’t enough quantum states to fit all the electrons in. This is exactly how a white dwarf supports itself against its self-gravity. As the core grows, it gets hotter and hotter until, around 0.5 M☉, helium suddenly ignites. 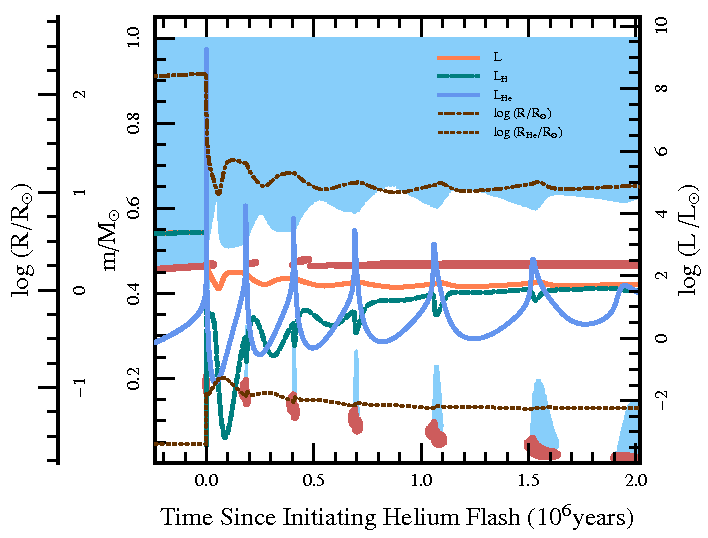 The densely packed Figure 2 from the paper, showing details of the helium flash (and subflashes). The x-axis shows the time since the first helium flash, in Myr. The orange, green, and blue curves are the total, hydrogen-burning, and helium-burning luminosities, read against the right axis. Note how the He-luminosity jumps by a factor of about 10 million at the first flash, with smaller jumps at subflashes. The blue and red shaded regions are convective and nuclear burning regions, in the mass co-ordinate on the left. The He-burning is initiated away from the centre because neutrino losses lower the central temperature. The flashes drive small convective regions. Finally, the dot-dashed and dot-dash-dashed curve are the core and surface radii. The envelope quickly contracts roughly to it

This sudden ignition is called the “helium flash” because a large amount of material lights up at nearly the same time, producing an enormous jump in the luminosity. This jump also suppresses the burning, so the core contracts after the flash and then lights up again. After these “subflashes”, the star settles down to gently converting helium into carbon through the triple-alpha process. All these rapid and extreme processes make this phase difficult to calculate. Some codes, that will go unnamed here, don’t do it at all, but MESA is up to the challenge.

Despite huge jumps in the core luminosity, the changes felt at the surface are relatively mild, so we have nearly no observational constraints on the helium flash. The authors use models produced by MESA to calculate (in an ideal limit) what the oscillation properties of stars in this phase should be and how they vary as the star transforms from a shell-hydrogen-burner to a core-helium-burner. Most interestingly, the authors suggest not only that we can identify stars in the transition, but that we have possibly already seen them. The authors predict that about 1 in 35 stars near the red clump are in this phase, and they even identify 3 stars in a recent sample set that might be in this transition phase.

The authors acknowledge that there’s still some work to be done. The oscillation calculation they’ve done is approximate and they’ve deliberately suppressed some of the more poorly understood processes in stellar models. But the meeting of models and measurements is certainly ready to help us learn a lot more about the structure and evolution of stars. As a stellar astrophysicist, that’s music to my ears.