Figure 1: Image from a simulation showing what will happen to the gas cloud that is approaching the black hole at the center of our galaxy. Credit: ESO/MPE/Marc Schartmann

Hold on tight, folks — we should be in for an exciting show in the summer of 2013! Remember that tidal disruption event we talked about earlier this year, where a flare-up was witnessed that was interpreted as a star getting just a little too close to a quiescent black hole? Well, here’s our chance to witness something similar, happening in the center of our very own galaxy!

First off
Go watch this 40-second video from ESO/MPE. Seriously, do it. It’s a little slow to load, but it will show you everything I’m about to describe, and it may be one of the coolest astrophysical simulations you’ve ever seen.

Now that you’ve done that, we’ll move on.

Sgr A*
It’s believed that a supermassive black hole of 4.31 × 106 M☉ resides in the center of our galaxy. Sagittarius A* (or Sgr A*) doesn’t draw a lot of attention to itself, though — apart from occasional little flares, it generally sits around quiescently at about 1033 erg/s in X-rays (that’s roughly the same as the Sun’s luminosity in all wavelengths).

The approaching cloud
It looks like a meal is on its way for Sgr A*, however. This paper discusses an observation from the Very Large Telescope of the European Space Observatory (located in Chile) of an object of roughly 3 Earth masses that, based on observations starting in 2002, is headed almost directly for Sgr A*.

The authors of this paper have determined that the object is almost certainly a cloud of gas and dust, based on its low temperature (roughly 550 K), simultaneous relatively bright HI and HeI emission, and extended shape (it has a spatially resolved velocity gradient, so it can’t be a solid body all moving at one speed).

So where did this cloud come from … and what is it doing now? The authors speculate that it might have originated within the vicinity of Sgr A* from a massive O or Wolf-Rayet star, which can have powerful winds. The cloud seems to have been launched onto an extremely eccentric (e = 0.94) Keplerian orbit around Sgr A* with a period of 137 ± 11 years. It’s calculated to reach pericenter, the point of closest approach to Sgr A*, in the summer of 2013 — which’ll give us front-row (or whatever row is ~26,000 ly away) seats to what happens then! 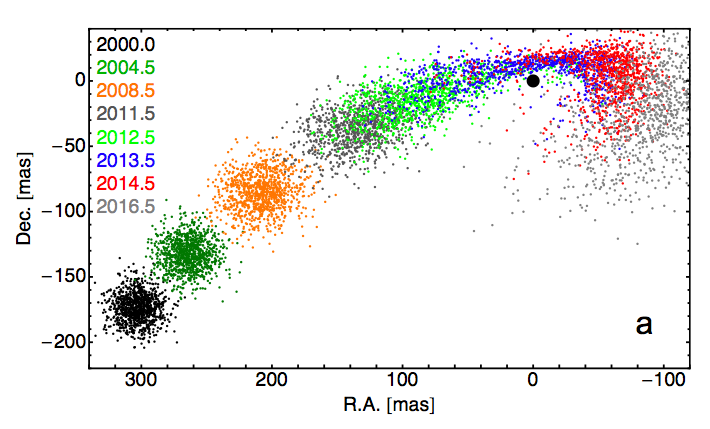 Figure 2: Results of a test particle simulation (with 1000 particles) of tidal disruption. This an oversimplified model, but provides us with an idea of what the evolution of the cloud would look like if accretion flow were absent. Figure S4 in the paper.

What we think will happen
At pericenter the gas cloud will be only 3100 Schwartzschild radii, or about 36 light hours, away from Sgr A*. We’ve only ever witnessed two objects get closer, and those were stars rather than extended bodies, so they weren’t in danger the way this cloud is! The stronger gravity of a star can hold it together against tidal forces much better than the weak gravity of something like a gas cloud. The hope (and expectation, as seen in the simulation video and both figures in this post) is therefore that the cloud will get tidally disrupted as it passes by Sgr A*. In fact, this has already started to happen: the intrinsic velocity width has more than tripled over the last eight years — so the cloud must already be getting pulled apart by tidal forces.

As the cloud gets closer to Sgr A*, the authors predict via simulations that it will be compressed by collisions with the hot gas in the accretion flow, and further sheared by the black hole’s tidal forces. As it passes by Sgr A*, this process may heat it up enough to emit X-rays. Since the mass of the cloud is larger than the mass of hot gas normally available in the innermost region around Sgr A*, bits of this cloud falling in could plausibly dominate the accretion near the event horizon and might release up to around 1048 ergs over the next decade.

I said we’re hoping the cloud will get ripped apart and fall into the black hole; let me be more clear. It’s not just that we like watching destruction (though, let’s be honest, that’s fun) — but this cloud’s disruption and accretion onto Sgr A* would provide one of the best probes yet of the physical conditions in the accretion zone around a black hole. Since we have an unusually good knowledge of the mass available for accretion, we’d be able to place stringent constraints on the physics of black-hole accretion after observing this event.

What Fed Sgr A* its Latest Meal?