This Nature letter reports on a recent discovery that has also met with great interest in the popular press: astronomers have measured the biggest black holes ever! These two ten-billion-solar mass giants are significantly more massive than any other known black hole and more massive than predicted with the widely-used correlations relating the black hole mass to other properties of the host galaxy.

First, a bit of context.
Black holes are extremely compact concentrations of matter producing such strong gravitational pull that nothing, not even light, can escape. General relativity predicts such gravitational singularities of zero volume and thus infinite density. Studying stellar evolution, we learn that the explosions of heavy stars as supernovae can leave behind remnants of stellar mass-black holes. But super-sized black holes of million solar masses (called supermassive black holes) presumably originate from mergers of other black holes, or by accreting large amounts of stars and gas in an active galactic nuclei (AGN) phase.

Nowadays astronomers believe that every galaxy harbours a supermassive black hole at its center, including our own Milky Way where a central mass concentration of four million solar masses has been deduced from 16-years monitoring of stellar proper motions (see also today’s astrobite on the amazing discovery of a huge gas cloud being swallowed by this black hole). As pointed out by Susanna’s astrobite, it is not possible to observe directly a black hole, but the motion of stars or gas orbiting around it can be used to infer the gravitational potential and so the black hole mass.
The Schwarzischild’s orbit superposition method is a powerful tool which is often used to model the galaxy photometry together with the stellar velocities in order to estimate the amount of mass concentrated at the very centre of a galaxy.
This numerical method works by assuming a black-hole mass (but also a stellar mass-to-light ratio and even a dark-matter profile for the galaxy halo) and computing a large library of orbits in the resulting trial potential. The superposition of all these orbits builds up a “galaxy model”, and the weight of each orbit is adjusted until the galaxy model reproduces the observational data of the target galaxy. In this way, exploiting large computational resources, families of galaxy models can be generated, and the best-fitting model can be determined together with confidence intervals on the parameters.

There exist more than 60 dynamical measurements of masses of supermassive black holes, and the biggest for more than 30 years was a 6.3 billion solar mass guy seated at the centre of the nearby galaxy M87 (have a look at the remarkably old paper by Sargent at al).

Black hole masses are well known to exhibit a very tight correlation (a power law with constant exponent) with both the stellar velocity dispersion and the bulge luminosity of their host galaxies: the higher the luminosity or the stellar velocity dispersion of the galaxy, the higher the mass of the black hole hidden at the centre. The existence of this kind of relationship implies that the growth of supermassive black holes and galaxy bulges are closely connected by some sort of feedback.

And now, to the spectacular news.

Using the Gemini and Keck telescopes in Hawaii, the authors of this paper obtained integral-field spectra, that is two-dimensional kinematic data, of the diffuse starlight in the central regions of the elliptical galaxies NGC 3842 and NGC 4889. 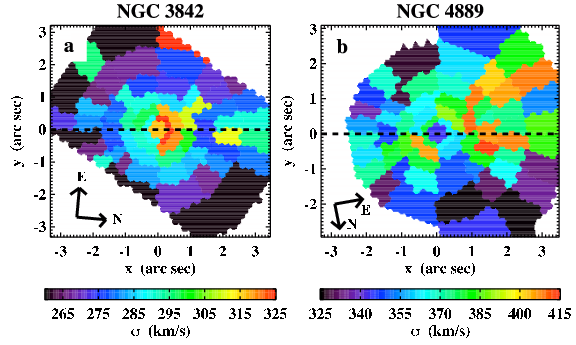 Figure 1: How the observational data look like: two-dimensional maps of the line-of-sight stellar velocity dispersion in the central regions of NGC 3842 and NGC 4889.

These are the two brightest cluster galaxies lying at the bottom of the potential wells of the Leo cluster (at a distance of around 98 Mpc from Earth) and of the Coma cluster (103 Mpc distant), respectively.
Using the orbit superposition method to fit the measured line-of-sight stellar velocities, the authors were able to estimate a black hole mass of 9.7 billion solar masses in the elliptical galaxy NGC 3842, and a black hole of comparable or greater mass in the elliptical NGC 4889.

Such big black hole masses are beyond what can be predicted from the stellar velocity dispersion or bulge luminosity of the host galaxy (using a linear extrapolation of the well known correlations) and this led the authors to speculate that the evolution of galaxies and of their black holes follows different paths depending on galaxy mass. In this respect, the amount of gas dissipation happening during the processes of galaxy formation is expected to play a major role: simulations of mergers of gas-rich disk galaxies (higher gas dissipation) produce remnant galaxies in agreement with the observed correlations over the intermediate mass range of black hole masses, whereas simulated mergers of elliptical galaxies with progenitors on low-angular momentum orbits (lower gas dissipation) result in a remnant galaxy of increased black hole mass but unaltered velocity dispersion. Moreover, massive ellipticals retain residual amounts of gas even after star formation switches off, and their black hole masses could grow further by ravening such gas.

Having said that… black holes of billions of solar masses are pretty normal for astronomers who study quasars in the early Universe, a few billion years after the Big Bang. Indeed, these new measurements support the hypothesis that black holes hidden in nearby galaxies are dormant AGN, peacefully settled into retirement after having eaten up as much as possible.