TITLE: Exclusion of a luminous red giant as a companion star to the progenitor of supernova SN 2011fe

Concerted efforts over two decades have honed our ability to use the spectra and lightcurves of type Ia supernovae as cosmological probes, yet our understanding of the physical mechanism responsible for them remains fuzzy. The explosion progenitor itself is thought to be a white dwarf approaching the Chandrasekhar mass, igniting a thermonuclear runaway and catastrophic explosion. However, the pathway by which the white dwarf accumulates mass up to the Chandrasekhar limit is yet undetermined. There are three viable channels for mass transfer onto a white dwarf. The double-degenerate model (so-called because both objects in the system are supported by degeneracy pressure) considers a tight binary white dwarf system. Over time, the system will lose energy to gravitational radiation, shrinking the orbit. When the white dwarfs are close enough, mass transfer ensues. In single-degenerate models, a white dwarf accretes mass from a donor such as a main sequence star, a subgiant, a red giant, or a helium star. Theoretically, any of these progenitor systems is possible. Imaging the explosion site of a bright, nearby supernova is our best bet at confirming which of these channels is actually responsible for the mass donation.

Fortuitously, the explosion site of this supernova has ample pre-explosion imaging available in the Hubble archives. To place tight constraints on the progenitor, the authors improve the Hubble data’s astrometric solution by taking new, AO-assisted Keck images. Figure 1 (below) shows a three-color Hubble ACS (Advanced Camera for Surveys) image of M101 in panel (a.), and a 3′ x 3′ image centered around the explosion site in panel (b.). Panel (c.) shows a 2″x2″ patch centered at the explosion site. The small circle has a radius of 1-sigma, or 21 mas. Star 1 and Star 2 are shown to be detected outside the 9 sigma error position of the explosion site, excluding them as companions.

Careful image analysis finds no source at the supernova location. However, we can place upper limits on the brightness of the progenitor system. Figure 2 (below) is the meat of this paper: we see the color-dependent magnitude limits from Hubble imaging (thick yellow line) along with the brightnesses and temperatures of possible companions on the Hertzprung-Russel diagram. 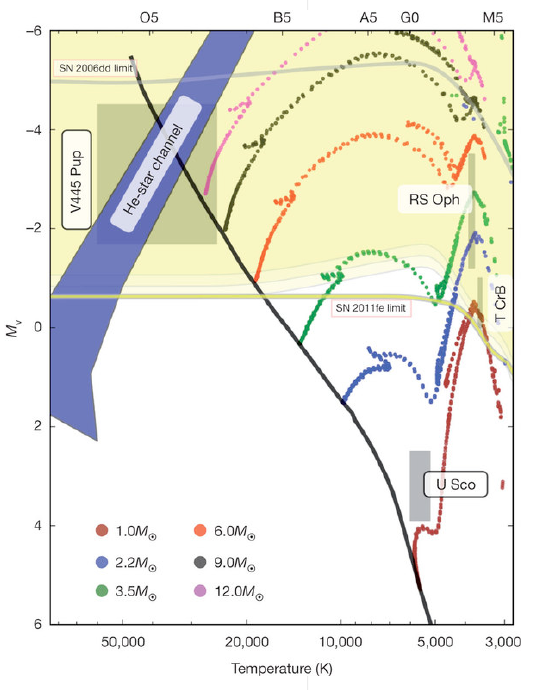 Figure 2: This Hertzprung-Russel diagram shows the constraints imposed on the progenitor system by non-detections in Hubble imaging.

V445 Pup, RS Oph, T CrB, and U Sco are galactic single-degenerate systems previously thought to be candidate type Ia supernova progenitor systems. All of these systems except for Roche-Lobe overflow system U Scorpii are easily ruled out as a prototype for SN2011fe. We also see the main sequence and the evolutionary tracks of solar-metallicity stars of varying masses (labelled by color). Note that post-main sequence stars greater than 3.5 solar masses are excluded as companions by the new magnitude limit.

The authors utilize archival imaging in other parts of the spectrum to search for signatures of the progenitor system. Both single and double degenerate systems are expected to emit X-rays during the accretion period, so they look to the Chandra archives for an X-ray signal from the location of the explosion. Imaging from 2004 yields an upper limit  of (4–25) × 10^36 erg/s, too high to distinguish between single and double degenerate scenarios. An analysis of mid-infrared imaging from the Spitzer space telescope yields an upper limit that rules out massive red giant donors consistently with optical limits.

The take-home message: An improved astrometric solution of archival Hubble M101 images rules out luminous red giants as the companion to the white dwarf that exploded as supernova SN2011fe.