The idea behind EChO is simple: to provide a dedicated platform for exoplanet characterization, i.e. to figure out what’s in the atmospheres of planets around other stars. Missions like Kepler do a great job at finding extrasolar planets and at estimating their sizes. Most of these worlds can be massed as well, using techniques like radial velocities and transit timing variations. These are fantastic measurements that let us build up a broad picture of the exoplanetary population. However, as Figure 1 shows, mass and radius alone tell us almost nothing about what might be in a planet’s atmosphere, and what conditions on the surface (if it even has one) are like. Understanding atmospheric and surface composition is critical to a complete theory of the formation, evolution and dynamics of planets, as well as in determining whether or not they might be habitable. For example, Earth and Venus share similar masses and radii, but life as we know it would be hard-pressed to exist on the lead-melting surface of Venus! 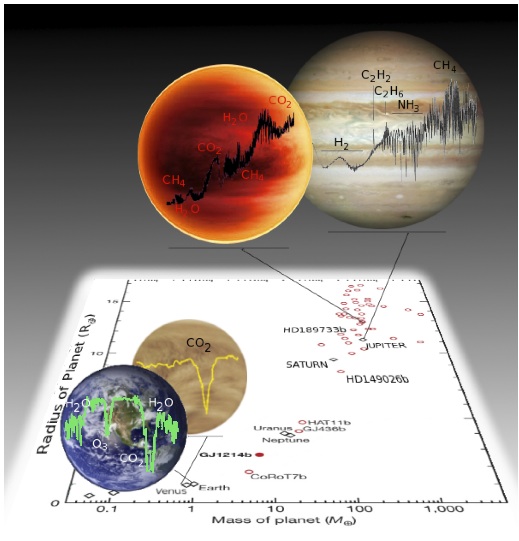 Figure 1: Planets with similar masses and radii can have very different atmospheric structures. Earth and Venus share similar masses, radii and densities, but have very different atmospheres and surface conditions. Jupiter and HD189733b similarly are in the same mass and radius regime, but have different compositional and thermal profiles. Spectroscopy can break the degeneracy and let us figure out what these planets are really like.

Spectroscopy allows us to break this degeneracy and directly characterize exoplanets. By looking for the spectral imprint of different substances, we can figure out the composition of the atmosphere as well as its temperature structure (if a feature is observed in absorption, then that substance is hotter deeper in the atmosphere; if in emission, then the opposite is true).

EChO proposes to act as the first dedicated platform for exoplanet spectroscopy. We have already learned a great deal about the chemical compositions of exoplanets using existing space-borne missions like Hubble and Spitzer. However, these platforms were designed for the background-limited studies needed for cosmological and galactic studies, not the photon-limited observations that exoplanet characterization requires. By optimizing specifically for the requirements of exoplanet observations, EChO aims to achieve great precision and spectral coverage to facilitate the detailed study of exoplanet atmospheres.

The ESA’s M-class program refers to medium-size missions (i.e. sub-flagship size); other examples include Euclid, slated for launch in 2019. EChO is competing for 475 million euros of funding and has a proposed 2022 launch date.

EChO will feature a 1.5-meter telescope passively cooled (no moving parts!) to 50K. This stable design is designed to reach a long-term precision of one part in a hundred thousand, or .00001. EChO would be able to look at wavelengths from 0.4-16 microns (redder visible light through IR) with R~50-300 (low-to-medium resolution, good for photon-limited exoplanet studies). This waveband spans 30 key molecular features.

The scientific goals of EChO are summarized in Figure 2 and include:

In addition, EChO could be used to search for exomoons as small as 0.33 Earth radii in size via transits, and take the first steps toward looking for possible biosignatures on super-Earths. 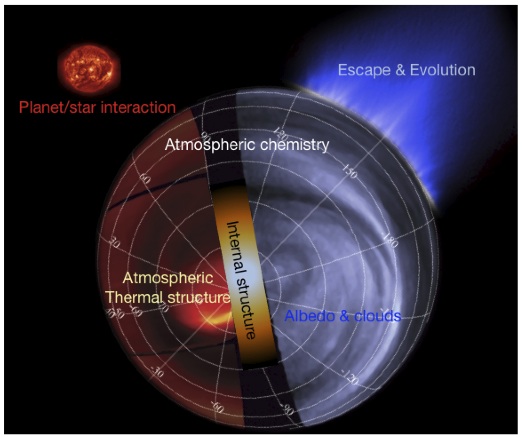 Techniques used by EChO to achieve these goals include: 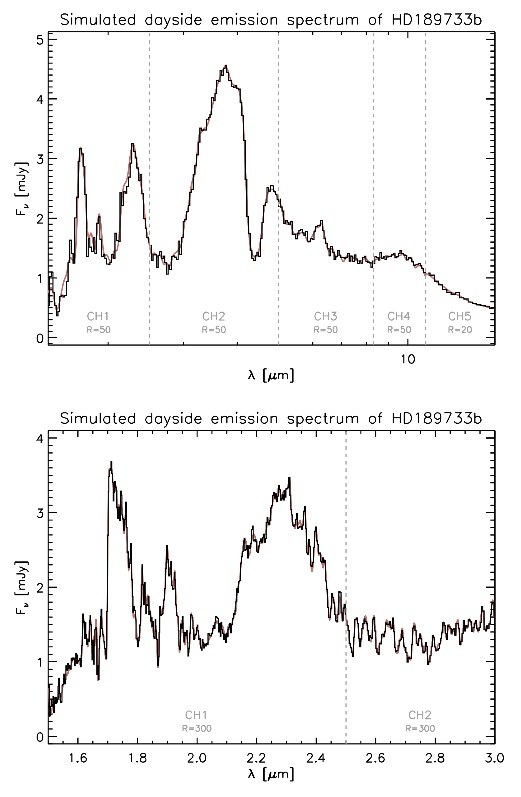 Figure 3: Simulated EChO spectroscopy of the archetypal Hot Jupiter HD 189733b. Note the extraordinary resolution of spectral features, including resolving individual hydrocarbon lines, an as-of-yet unachieved feat. The team projects that obtaining a spectrum with this high of a signal-to-noise ratio would require observing 50 eclipses, corresponding to 8 days of observing time, which would be spread out over approximately 3.5 months.

EChO is flux-limited to V-magnitudes of about 12 for Neptune-class objects orbiting G or K stars, and K-magnitudes of about 9 for habitable super-Earths around late M stars. At the present time, there are ~80 transiting exoplanets that would be viable targets for EChO, including several super-Earths, and it is anticipated that many more would be discovered by the time the mission flies. Figure 4 summarizes the expected observing time allocations for different targets. Super-Earths and Earthlike planets would be a priority for EChO and would be allocated more time if more are discovered by the time the mission flies. 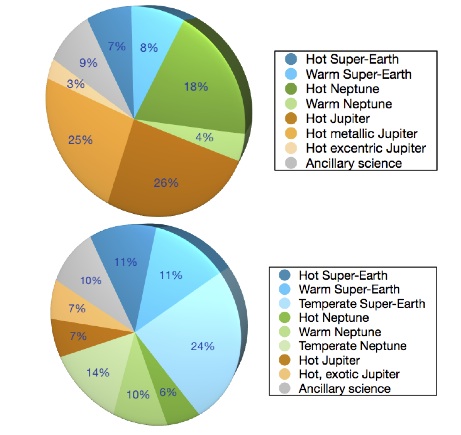 Comparison to Other Instruments

EChO is projected to be operating simultaneously with NASA’s James Webb Space Telescope (JWST) and large ground-based telescopes like the European Extremely Large Telescope (E-ELT). How will EChO complement these observatories?

E-ELT: A 42-meter telescope like the ELT would have much higher resolution and photon-gathering capacity than EChO. However, the limiting factor in exoplanet observations is long-term photometric stability, and due to the atmosphere alone, the ELT would not be able to achieve anywhere near EChO’s precision. Furthermore, absorption from the Earth’s atmosphere would obscure many of the most interesting spectral features (including the very substances that are the strongest indicators of habitability and possible life!), rendering them unobservable from the ground.

JWST: JWST would have greater collecting area, and hence sensitivity and resolution, relative to EChO. However, JWST is again optimized for background-limited, faint observations, not long-term photon-limited ones. It would consequently be unable to match EChO’s long-term sensitivity of 1e-5. Furthermore, JWST would not be able to achieve simultaneous coverage across the full 0.4-16 micron band spanned by EChO; thus, in order to cover the same wavelength range, many more orbits and observations would be required. Finally, with ~85% of JWST’s observing time dedicated to non-exoplanet targets, it would be very hard to schedule the repeated transit and eclipse observations of a planet required to drive up the signal-to-noise and derive high-fidelity observations of exoplanet atmospheres.

Exoplanet research has moved beyond planetary censuses. A dedicated exoplanet atmospheres observatory like EChO will be an essential part of the next generation of exo-atmosphere characterization.