Title: A minor body falling onto a neutron star as an explanation for the unusual 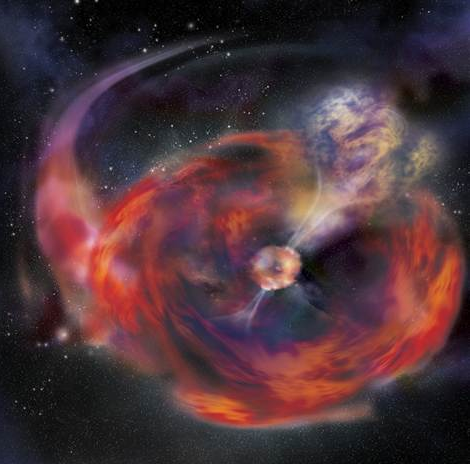 Last year on Christmas day, Santa delivered a unique gift to the astronomical world: the detection of light from an extraordinarily violent cosmic explosion.  The event, denoted as GRB 101225A, was classified as a gamma-ray burst (GRB), one of the most luminous events known to occur in the universe. Until relatively recently, the origin of these powerful explosions remained a mystery. With the development of better detection telescopes, scientists now believe that these bursts of high-energy photons signal the birth of a black hole, usually following the explosion of a massive star or the collision of two neutron stars. For a quick update on the most common progenitor of GRBs, check out this great astrobite.

From the moment NASA’s Swift satellite detected the “Christmas burst,” the event appeared to be unusual. While most GRBs last between a few seconds and several minutes, GRB 101225A persisted for an exceptional half hour. Following the detection by Swift, a network of ground and space based telescopes were triggered and began to conduct follow-up observations of the event. These observations uncovered yet another peculiarity: the afterglow of the burst had the spectrum of a thermal blackbody. The burst heated some kind of material to extremely high temperatures and then this energy was radiated away as thermal emission. This is unusual for GRBs, as the afterglows are typically dominated by non-thermal synchrotron radiation, caused by the acceleration of ultrarelativistic particles by strong magnetic fields. The thermal nature of the afterglow suggests that the emission is not driven by a black hole, like in the standard GRB models, but is coming from something else. But what?

Two interesting and very different theories have developed for the origin of the peculiar “Christmas burst,” both of which appear in the December 1st issue of Nature. The first idea, posited by Campana et al., involves the tidal disruption of a comet or other minor body by a neutron star. Neutron stars pack about the mass of the Sun into a radius of about 10 kilometers, which means their surface gravity is enormous (about

times that of Earth). In this model, the minor body came too close to the star and was literally torn to pieces, overwhelmed by the enormous tidal pull of the neutron star. The pieces of the minor body spiraled around the neutron star and eventually settled into an accretion disk around the star. As the comet pieces accreted onto the neutron star’s surface, the material was superheated and massive amounts of energy were released, thus explaining the two peculiar characteristics of GRB 101225A. 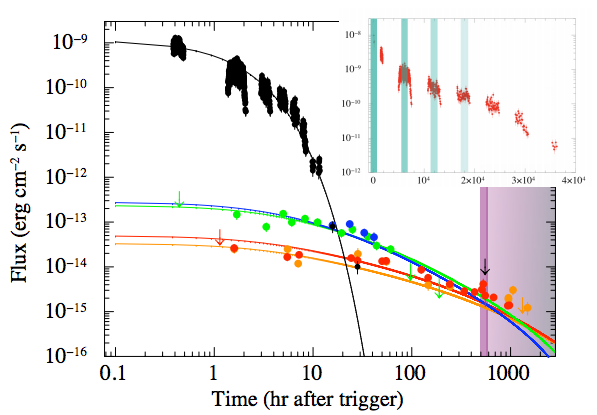 The light curves of GRB 101225A in five energy bands: X-rays at 1 keV (black dots), ultraviolet (green and blue), and optical in the R-band (red) and I-band (orange). The lines show the best-fit using the tidal disruption model of Campana et al. Inset: X-ray light curve taken by Swift telescope. The shaded regions mark the periastron passages of the minor body around the neutron star. (Fig. 1 of Campana et al.)

The observed light curves in five energy bands, as well as the best-fit lines using the tidal disruption model, are shown in the figure to the right. The inset of the figure plots the peaks of the X-ray light curve taken by the Swift telescope, which coincide with the shaded regions in the figure. These regions mark the minor body’s passage of closest approach near the neutron star (known as periastron), providing potential evidence for the accuracy of this model. The best-fit model places the event about ten thousand light years from Earth, well within our own Milky Way.

Eventually, the neutron star slams into the core of the normal star, and the intense gravity of the collision triggers a supernova explosion and GRB-like jets of high-energy photons. The energy released in such a monumental collision is nearly beyond imagination and is certainly larger than the energy involved in the tidal disruption model. Consequently, this type of merger event would have to be much farther away to explain the observed data.  According to Thöne et al., this distance is about 5 billion light years, which places the event in a distant galaxy.

The theories proposed by Campana et al. and Thöne et al. for the progenitor of GRB 101225A both model the observations reasonably well. Thus, it is difficult to distinguish between the two models without more observations. As satellites like Swift continue to monitor the night sky, future observations of GRBs should help to illuminate the mysteries of gamma-ray bursts and will hopefully help scientists determine the true origin of the “Christmas burst.”

Can gamma ray bursts be used as standard candles?