A workday at the South Pole is an exhausting affair. Although time zones don’t mean anything at the Pole and the Sun is up 24 hours a day during the summer season, we use New Zealand time for convenience because the US Antarctic Program operates out of Christchurch. We roll out of bed at 7:55 am and race to the galley in the hopes of getting some eggs before the cooks stop serving breakfast. Over the meal — and plenty of coffee — our team discusses the progress we’ve made so far and what work needs to be completed today. Afterwards, we pause for an internet break. Internet at the Pole is provided by several satellites that are only up for a few hours per day, and those blocks of time change continually, so it’s important to use it while we can!

At around 9:30 we’ve all reconvened at the telescope, having bundled up and made the trek out to MAPO. This morning, my responsibility is to make a measurement of the Keck Array’s sidelobes, or how our telescope responds to radiation that it isn’t pointed at directly. Specifically, we want to compare how the telescope detectors respond to radiation with and without the addition of absorptive forebaffles. Forebaffles are cylindrical shields that attach to the front of the receiver. They protect the telescopes from wind and snow and block light from unwanted sources. For the last week I’ve been taking data with the forebaffles off, so now I need to reattach them.

I walk out onto the roof of MAPO and into the ground shield surrounding the telescope. We then point the telescope at the zenith so that it’s safe to walk on, and I climb up to the top. Next, my teammates hand me a forebaffle, and I attach it to the receiver: 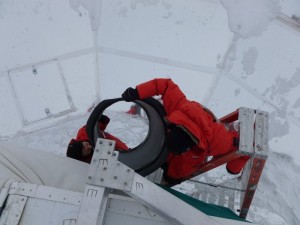 Hoisting a forebaffle up the ladder 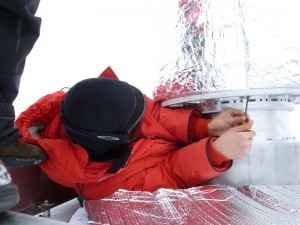 Attaching the forebaffle to the telescope

Now that the forebaffle is attached, I need to prep the source. The idea behind the measurement is to place an artificial microwave source that emits over the range of frequencies that our telescope sees, around 150 GHz, high in the sky, and then to measure the detector response to the source as a function of angle between the two. In the lab, I adjust the power settings inside the source box and cover it with microwave absorber to prevent stray reflections. 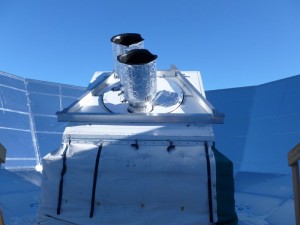 Forebaffles attached and ready for measurement 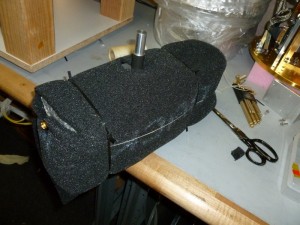 Next I take it outside and attach it to our source mast. We want the source to be relatively far away from the telescope so we can observe it at all angles, so we have installed a 50-foot tall mast that can be lowered to the ground. I turn a crank on the mast to raise the source back into the air. It’s a real workout, especially because I’ve messed up the alignment and have to raise and lower the mast twice more to get it right! 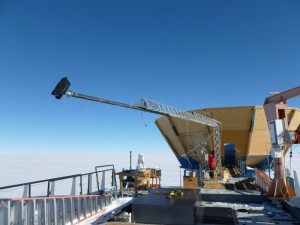 The mast lowered with the source attached 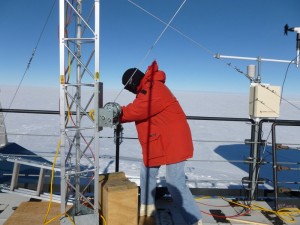 Turning the crank to raise the source 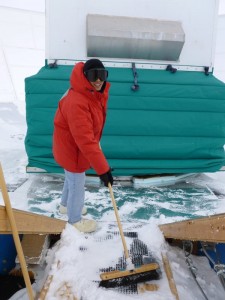 Sweeping snow out of the ground shield

Finally, before starting the measurements, we’ve noticed that some snow has accumulated inside the ground shield. As the junior grad student on the project it falls to me to grab a broom and sweep the snow out.

Now, it’s time to take some data! I log into the control computer and run a schedule that tells the telescope to scan across the source in azimuth at different elevation angles. The schedule takes about 30 hours to complete, after which we will make plots of the detectors’ beam profiles. For now, though, it’s time to head back to the station for lunch.

Back in MAPO at 1:30 pm, I’m going to help out with some in-lab work. Of the five receivers that make up the Keck Array, only two are in the mount taking data. The other three have been moved to the lab for upgrades and testing. Today, I’m going to help “close up” one receiver for which we’ve just replaced the focal plane.

We call our receivers “cryostats” because they are cooled to cryogenic temperatures — the focal plane is held at just 250 mK, just above absolute zero! This is necessary because the detectors are Transition Edge Sensor (TES) bolometers, which are essentially thermometers with extremely high sensitivity. To reach this sensitivity, the detectors need to be held at low temperatures in order to become superconducting. The cryostat has several stages held at different temperatures: 300 K (room temperature, or the outer layer), 50 K, 4K, and 250 mK. The 50 K and 4 K stages are cooled by a pulse tube, while a closed-cycle Helium-3 sorption fridge provides the rest of the cooling. 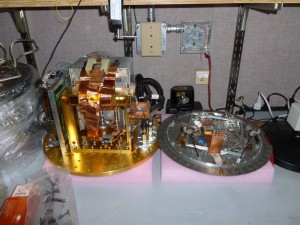 The helium refrigerator which cools the focal plane to 250 mK 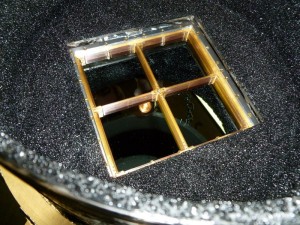 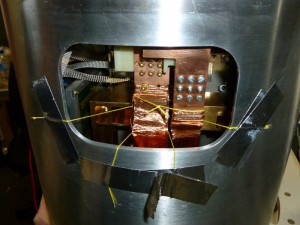 The fridge underneath the focal plane, thermally attached with heat straps 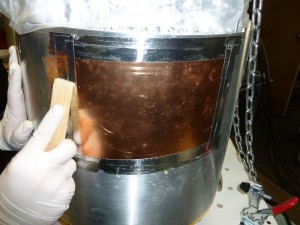 Sealing off the tube to prevent light leaks 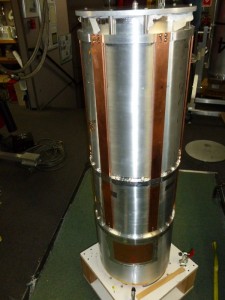 The inner portion of the telescope tube, containing the focal plane, fridge, and optics

Closing up a receiver means starting at the focal plane and connecting all of the readout and housekeeping electronics, while attaching the necessary optics components in a sort of “Russian Doll” enclosure. It looks a bit like we’re working on a spacecraft, with lots of Mylar and aluminum tape used to prevent microwave light leaks from one stage to another. A closeup will take upwards of a day, so this afternoon we’ll finish the focal plane prep, connect it to the 4K stage, and then attach the optics tube. Tomorrow when we get back, we’ll put the telescope tube inside the outer cryostat shell, pump down to a high vacuum, and then start cooling the receiver down to 250 mK.

After a hard day of work, it’s always a relief to get back to the station for dinner. Tonight is a worknight, so after dinner we will convene in the station’s lab and get some analysis work done, and then maybe watch a B-movie before going to bed.

In the next installment: a tour of the station, and how we blow off steam at the South Pole!