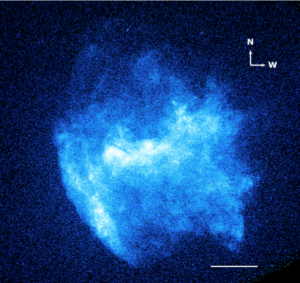 The remnant W49B seen in X-rays from the Chandra observatory. The scale bar is 1 arcsecond in length. (Image credit: Lopez et al. 2013)

The Milky Way supernova remnant W49B is an oddball. Although it is surprisingly bright in the X-ray and gamma ray bands, there is no sign of a central pulsar. The remnant itself has a curious barrel shape pointing towards either an asymmetric explosion or a very asymmetric ISM surrounding it. In this paper the authors discuss the possibility that the event that created W49B was a core-collapse supernova that formed strong bipolar jets instead of a spherical shockwave.

A jet-driven core-collapse supernova differs from the usual scenario in that a massive accretion disk forms around the central object during the collapse. This disk powers the formation of two huge polar jets that burn through the old star and break out into the surrounding medium. If the conditions are right, this kind of supernova can power a long gamma ray burst. The supernova remnant from such a highly asymmetric explosion doesn’t just look different; the different temperatures and kinetic energies of the jets yield different nucleosynthesis. W49B’s odd shape makes it a great candidate for the debris of one of these explosions.

In order to examine the nucleosynthesis in the ejecta, the authors divided W49B into a grid of 713 small regions and took Chandra X-ray spectra of each region. These X-ray spectra reveal the emission lines of highly ionized iron and intermediate-mass elements, e.g. silicon, sulfur, argon, and calcium. From these emission lines the authors map the column density of these elements across the remnant. They find that iron is concentrated in a bright bar and strangely absent in the western portion of the remnant, while the intermediate mass elements are more widely spread. This type of distribution is suggestive of a jet-driven event: nickel (which decays to iron) synthesizes more readily in the high temperatures of the jet itself, while intermediate-mass elements are lighter and easier to expel with the lower kinetic energies off the jet axis. 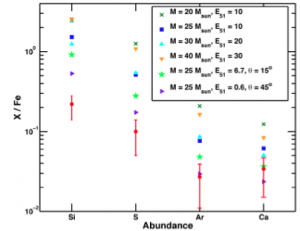 If W49B did indeed come from a jet-driven supernova, its core should have formed a magnetar or black hole afterwards. Magnetars are neutron stars with incredibly strong magnetic fields, on the order of 10^14 gauss. They don’t spin as rapidly as pulsars and tend to emit bursts of X-rays or gamma rays. Fermi/LAT observations of W49B already rule out a pulsar from the shape of the gamma ray spectrum. These Chandra observations of W49B place a strong upper limit on the flux from a point source neutron star, suggesting that if there is one, it’s two to three orders of magnitude dimmer than one of its age should be. Thus it seems likely that the supernova left behind a stellar-mass black hole instead. That makes W49B a strong candidate for an ancient long gamma ray burst event, where the twin jets powered by accretion onto that black hole would have eventually created a bright burst of gamma rays.