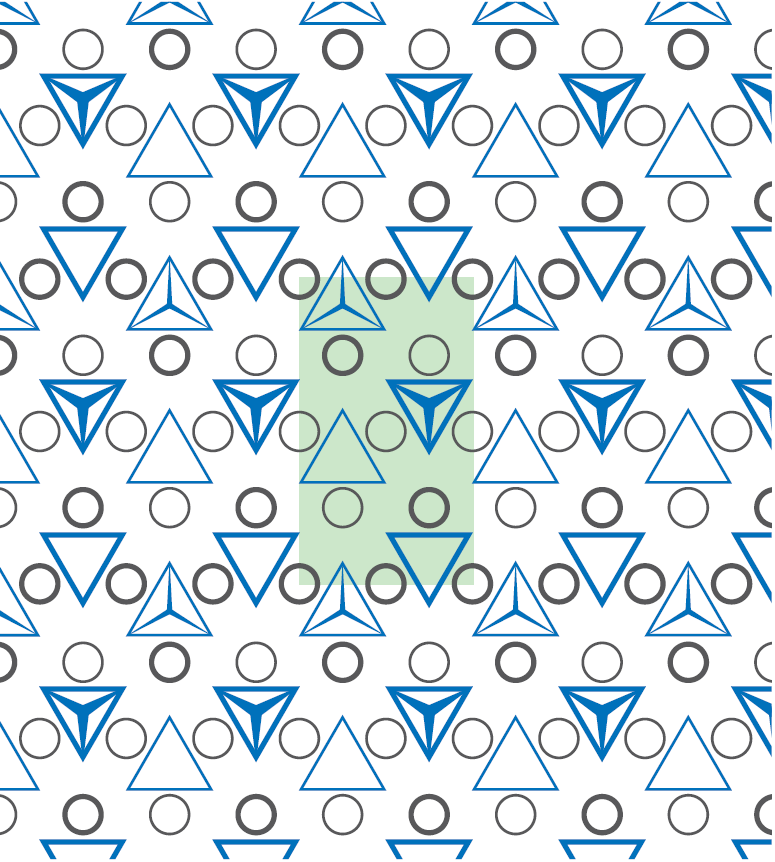 Figure 1. The crystal structure of olivine. The blue tetrahedra are composed of four oxygen with a silicon at the center. The gray circles show the location of the metal ions (either iron or magnesium). The highlighted box illustrates the unit cell. From Figure 3 of Henning (2010).

Young stars are surrounded by disks of gas and dust. We think that planets start to form when the dust grains in these protoplanetary disks collide and stick to each other. By studying the dust’s properties — abundance, composition, grain size, and temperature — we can further understand the first stages of planet formation.

The dust is composed of small mineral particles. The authors of this paper study grains of the mineral olivine, a type of silicate composed of silicon, oxygen, and some proportion of magnesium and iron. The crystal structure of olivine is shown in Figure 1. Four oxygen atoms are arranged at the corners of a tetrahedron, with a silicon atom at the center. These tetrahedra are then packed together with positively charged metal ions (magnesium or iron) in between. If the olivine contains more magnesium than iron it is called forsterite, and if it contains more iron it is called fayalite.

Small grains emit photons preferentially at certain wavelengths due to the nature of their chemical bonds (similar to emission lines from molecules). By observing these specific spectral signatures, astronomers can identify the presence of certain minerals, as well as constrain the properties of the dust grains.

In this paper, the authors look specifically for the forsterite emission feature at 69 microns in a large number of protoplanetary discs. A protoplanetary disk becomes optically thin (transparent) in this wavelength regime, allowing photons from deep in the midplane of the disk to escape and be detected. This is significant because it allows us to study the grains in the region of the disk where planet formation actually occurs. Forsterite also emits at shorter wavelengths, but those photons only come from dust near the surface of the disk, because the disk is optically thick at those wavelengths.

The 69 micron feature has previously been detected in the famous debris disk beta Pictoris.

The authors use the Photodetecting Array Camera and Spectrometer (PACS) instrument on the Herschel Space Observatory to get spectra of 32 protoplanetary disks.

Figure 2 demonstrates the process used to determine if the 69 feature was truly detected . The authors start by filtering out high-frequency noise from their raw spectra. They then fit their smoothed spectra with a polynomial to model the continuum (the signal on either side of the emission feature)  plus a Lorentz profile to model the emission feature itself. Finally, they subtract their best-fit model from the data, leaving the residuals, from which they compute the noise level in their data. If the signal in their emission feature is more than three times the noise level, they claimed to have detected the feature.

The authors detect the 69 micron feature in 8 of the 32 observed disks, indicating the presence of forsterite in these disks.

Figure 2. This illustrates the authors’ process for identifying spectral features. The x axis is wavelength in microns, the y axis is flux in Jy. Left panel: the raw data (black) and filtered data (red). Center panel: the filtered data (black) is fit with a model (red) composed of a Lorentz profile and a polynomial (green). Right panel: the emission feature model (red) is plotted against the residuals in the data (black) and the noise level in the data (green). This is for the specific target HD 179218. From Figure A2 of the paper.

The model fits yield three parameters: the height, width, and central wavelength of each emission feature. The authors then use these parameters, in conjunction with laboratory measurements and theoretical models of dust, to draw conclusions about the characteristics of the observed grains. 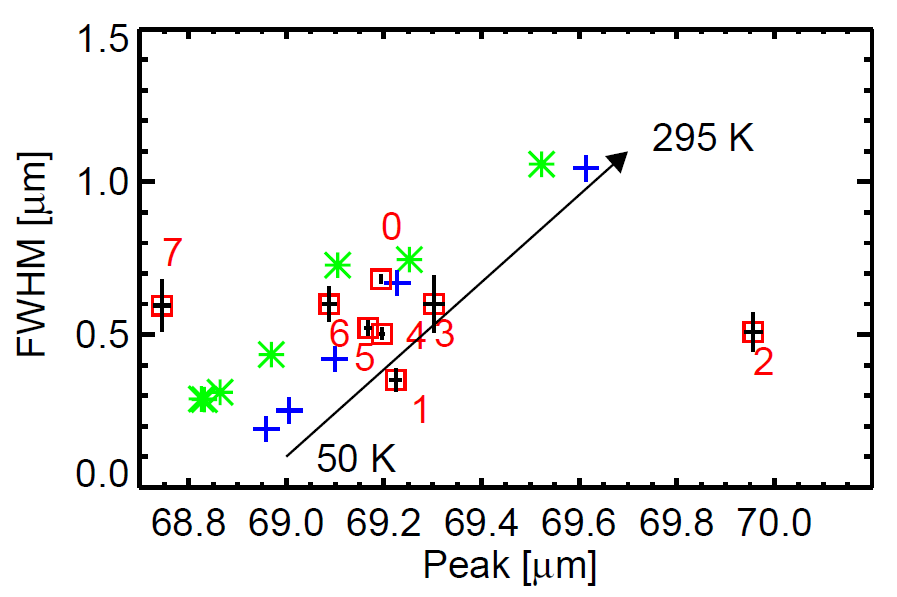 Figure 3. This plot shows the phase space of emission feature parameters: width vs. central wavelength. Shown are results from laboratory measurements (green) and theoretical calculations (blue) of iron-poor grains at different temperatures. The temperature range is indicated by the black arrow. The observed feature parameters are plotted in black/red. Target 2 (AB Aur) has at least some iron, and thus falls at longer wavelengths. Target 7 (AS 205) has cold dust, which is not accurately characterized by laboratory measurements. From Figure 5 of the paper.

The iron content of the dust (specifically the fraction of metal ions of the olivine occupied by iron, rather than magnesium) has the largest effect on emission profile. Higher iron content will shift the center of the feature to higher wavelengths. All of the 8 targets have features centered below 70 microns, which places strict upper limits on their iron content. Seven targets have an iron fraction below 2%, while one (the star AB Aur) has an iron fraction between 2% and 5% — still very iron-poor.

The temperature of the grains also affects the emission, with warmer grains having their features shifted to higher wavelengths and  broadened (see Figure 3). The parameters of the observed features lead the authors to conclude that most of the grains have a temperature of  100-200 K. One target (the star AS 205) has significantly colder dust, possibly below 30 K, although the exact temperature can not be determined due to limitations of laboratory measurements of very cold dust.

Grain size has some effect on the emission features, but it is too small to be distinguished for grains ranging from 0.1 to 1 microns. For grains larger than 10 microns, the strength of the feature decreases, becoming undetectable for grains larger than 20 microns. The data are consistent with grains smaller than one micron, except for one target (the star HD 141569) where grains with sizes up to 10 microns are possible, but not required.

The small grain sizes suggest that grain growth (an important first step in planet formation) has not occurred in these systems, despite the fact that these observations probe the disk midplane, where planet formation is expected to be most active. The authors note, however, that the forsterite grains could be embedded in larger aggregates of other compounds, as their emission features would still resemble small grains in this case.

The authors go on to speculate on the origin of the dust grains. One possibility is that larger objects (planetesimals) have already formed in the disk, and are now colliding and producing dust. This process, however, would predict grains with a substantial iron fraction, so the authors deem it unlikely.

A second possibility is that the solid dust grains condensed from the gas phase. But this process occurs at a temperatures around 1500 K, much hotter than the grains’ current temperatures. It is possible that grains can move radially through the disk, forming closer to the star then moving outward and cooling down, although the narrow range of temperatures measured for the dust suggests that they occupy only a narrow ring in the disk, a sign that radial mixing is unlikely. It is also possible that the grains formed at their current location when that part of the disk was temporarily heated by shockwaves driven by protoplanets or instabilities in the disk.

Observations of dust emission features from the midplane of protoplanetary disks — now possible with Herschel — are revealing details on the earliest stages of planet formation, a process that is still not fully understood by astronomers.