The central question of this Letter is how and when the Milky Way assembled its stellar mass. This issue is addressed observationally by tracing the formation history of spiral galaxies which closely resemble the Milky Way. Such large spirals (stellar mass ~ 5*1010 Msun) are extremely common. In fact, big surveys such as the Sloan Digital Sky Survey (SDSS) reveal that there are many Milky Way-like galaxies in the present-day Universe. Astronomer’s hard drives are brimming with data on high redshift galaxies, via surveys such as GOODS and CANDELS, and it would be great to single out the progenitors of the local Milky Way analogues among the higher redshift galaxies. But how can progenitors and descendants be linked?

The authors of this Letter adopt an approach which heavily relies on the assumption that – on average – all large spiral galaxies have the same formation history. Provided the assumption is almost correct, then the number of progenitors of the local Milky Way analogues in a volume which expands together with the Universe is equal to the number of the Milky Way analogues observed today. This density measure is called comoving number density, and it is a fixed number under the authors’ assumption. 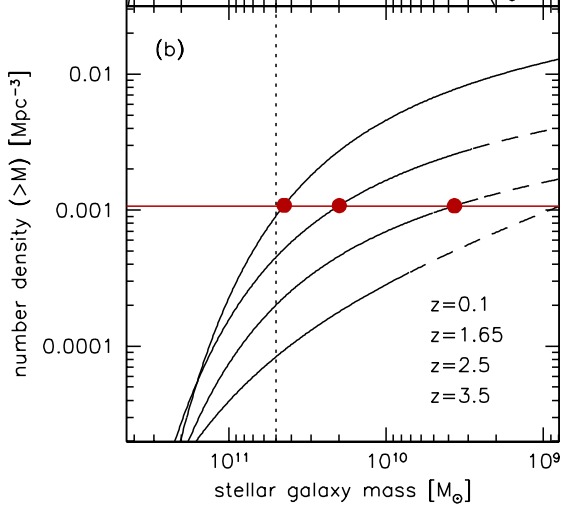 The idea is shown in Figure 1, where the cumulative galaxy mass function from SDSS-GALEX is plotted for different redshifts (times), from z = 0.1 to z = 3.5 (curves from top to bottom: as time goes by and stars are born, the stellar galaxy mass increases). In practice, the four curves show, for each redshift, the average number of galaxies in a cube of 1 Mpc whose mass is bigger than that reported in the x-axis. As highlighted by the dashed vertical line, the local Milky Way analogues (stellar mass ~ 5*1010 Msun) have a number density of 1/1000 Mpc-3 in the present-day Universe.

In practice, requiring that progenitor and descendant galaxies share the same comoving number density means drawing a horizontal line like the red one on a plot like this. In this way, the stellar mass of the progenitors of the local Milky Way analogues can be determined at various redshifts, and the mass evolution of these galaxies can be inferred.

Having done this, the authors look at the available data from big surveys and, for each redshift, they select galaxies in mass bins (±0.1dex) centered on the mass of the progenitors of the local Milky Way analogues at that redshift. That is: they pinpoint the forefathers of galaxies with the mass of the Milky Way all the way from z ~ 2.5 to the present. Both redshifts and stellar masses are determined from deep photometric catalogs combined with spectra, as will be described in an up-coming paper (Skelton et al). 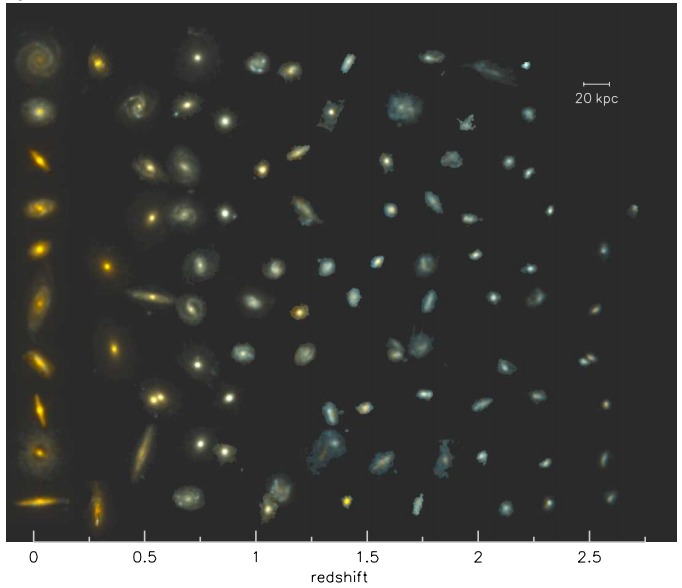 Since the images of galaxies in Figure 2 were scaled to a common physical scale, and their colors can also be directly compared, it is immediate to see that, as time goes by, galaxies become redder, due to a slow-down of their star formation rate, and brighter, due to the stellar mass assembly.

Moreover, Figure 2 illustrates the main point of the Letter: in Milky Way-like galaxies, bulges formed in locksteps with disks between z ~ 2.5 and z ~ 1. At high redshift, there is no evidence of a “naked bulge”, i.e. a bulge without a disk, around which the disk assembled later in cosmic history. The growth of the central regions gradually stopped after z~1, and only the outer regions of spirals continued to build up.

This result is quantified in the rest of the letter, where the authors study the evolution of surface density profiles and structural parameters (effective radius, Sersic index) of the selected galaxies, their mass growth at different radii, and finally their star formation history.

On the whole, their findings support a formation scenario for Milky Way-like galaxies in which most of the mass growth took place in a uniform way, with galaxies increasing their mass at approximately the same rate at all radii. In practice, an inside-out scenario in which bulges are fully assembled before the disk is and the outer parts are build later, similar to the assembly history of massive elliptical galaxies, seems inconsistent with the observational data. Alternative formation models in which bulges and disk form together, e.g. via bar instabilities or migration of star-forming clumps in unstable disks, are more likely to be correct.