97% of stars, including the Sun, will end their stellar lives as white dwarf stars. White dwarf stars no longer undergo fusion in their cores, so they slowly cool off. This cooling rate, along with the present temperature of a white dwarf, can be used to determine the age when stars began to form in a region. Merging white dwarfs are believed to be the cause for type Ia supernovae, which are used as the basis for most of our cosmology.

There are a number of different types of white dwarfs, identified and classified based on spectral characteristics. These characteristics also give some clues as to the progenitors of white dwarfs. For example, “DA” refers to a white dwarf with hydrogen lines. DBs have helium lines. DCs have no obvious lines (the C stands for continuum). DQs have carbon lines. DZs have metal lines and no hydrogen or helium. Additionally, astronomers will add a V at the end if the white dwarf is pulsating. The paper today presents data on a new DQV, a variable, carbon atmosphere white dwarf.

Hot DQs, with effective temperatures ranging from 18,000 K up to 24,000 K, were first discovered as a new class of objects in 2003 from the Sloan Digital Sky Survey. The higher temperature of these white dwarfs were enough to observe atomic carbon, while the cooler DQs only had molecular carbon. These cool DQs, which have been known about for a while, have effective temperatures less than 10,000 K.  While cool DQ white dwarfs have helium dominated atmospheres, these hot DQs do not. It is currently unclear the relationship between these two types of white dwarfs.

Asteroseismology is a commonly used tool to investigate the interior structure and composition of stars by studying the pulsations and oscillations in stars.. As astronomers were trying to understand these hot DQs using asteroseismology, it was found that a number of these systems were pulsating as well. But that did not stop the mystery. The cool DQs are not known to pulsate. The pulsations of these hot DQVs were found to be non-sinusoidal with one primary period and strong harmonics. Then a few were found to have strong magnetic fields, around a few million Gauss. Recall that the Earth has a magnetic field around 0.65 G, so these are very strong fields. Williams et al. present here the discovery of a new DQV they think contains clues to where these stars come from. 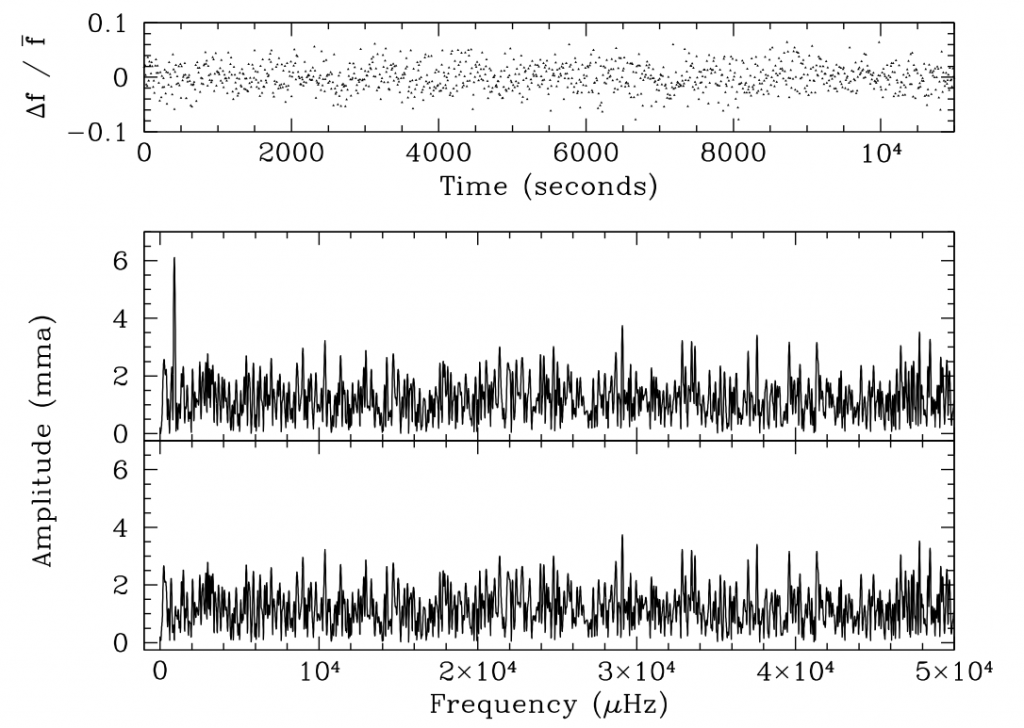 Top panel: Light curve from one night of data. Middle panel: discrete Fourier Transform showing the peak for the frequency on the left. Bottom panel: DFT with the period removed.

The authors obtained a significant amount of time-series photometry to investigate the possibility of variations in this white dwarf. Time-series photometry is a powerful tool useful for studying systems whose flux varies with time. By taking a series of exposures, you can construct a lightcurve, as shown in the top of the image at right. In this case, the exposure time varied between 10s and 30s, depending on the conditions during the night. Data was collected on twelve nights spanning 15 months.

As you can see in the lightcurve, there is no obvious periodicity in the lightcurve. But by using a discrete Fourier Transform, which searches for periodic structure in the data, the authors found a signal with a frequency of 897.3 micro-Hz, or a period of 1115.64751 seconds. You can see this peak in the middle panel of the image. In the bottom panel, the authors repeat this procedure after removing the signal from the first peak, and find no other significant peaks, indicating there is just one primary pulsation. The lack of a significant peak in the bottom panel indicates there is just one primary pulsation present in this white dwarf. 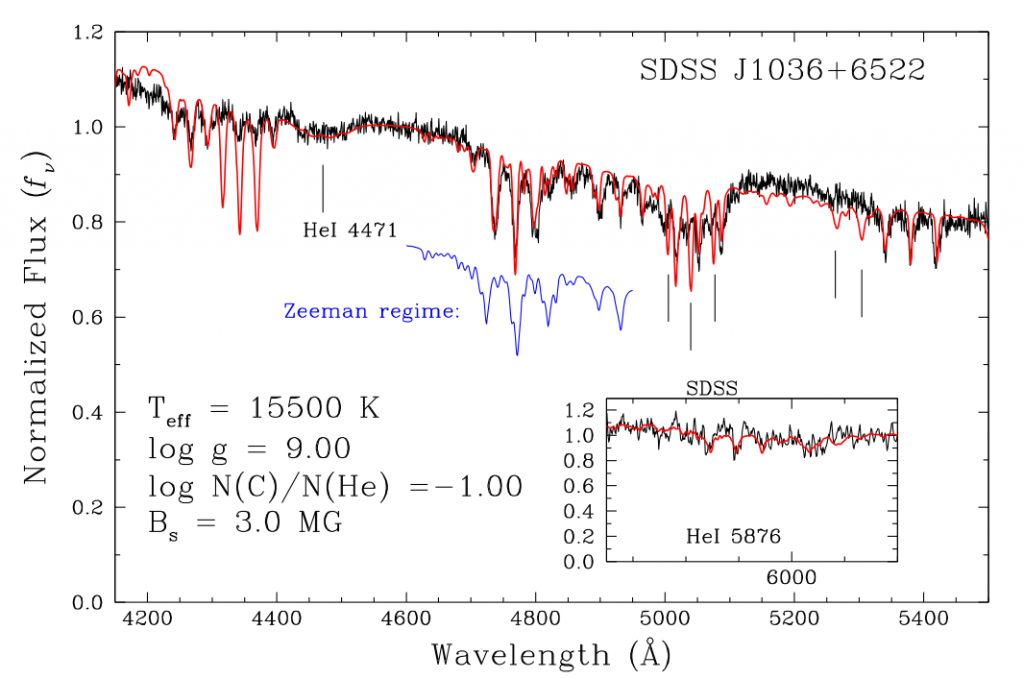 Spectrum of the DQV studied in the paper. The red is the fit to the spectrum using the models. You can easily see the splitting of the absorption lines caused by the magnetic field.

Synthetic spectra were created to cover a range of temperatures, surface gravities, ratio of carbon to helium, and magnetic field strengths. The spectra were fit to the models to determine these quantities. The best fit to the spectra is shown at left. You can see that the absorption lines have shallower lines on either side that are caused by the Zeeman splitting. The spacing of the lines is determined by the magnetic field strength. The authors found that this white dwarf has a magnetic field of 3 MG.

The effective temperature of this white dwarf, found to be 15,500 K, falls in between the upper bound of cool DQs (10,000 K) and the lower bound of hot DQs (18,000 K). The high carbon abundance would group it in with the cool DQs, but the magnetic field strength is akin to other hot DQs. The authors therefore propose that this white dwarf is a transition object between the coolest hot DQs and the hottest cool DQs. This would then support one of the theories about the origin of these hot DQVs, which is that they are part of the evolutionary path of white dwarfs that are deficient in hydrogen and helium. The models of these systems still need to be improved to lead to a full understanding of these hot DQs.