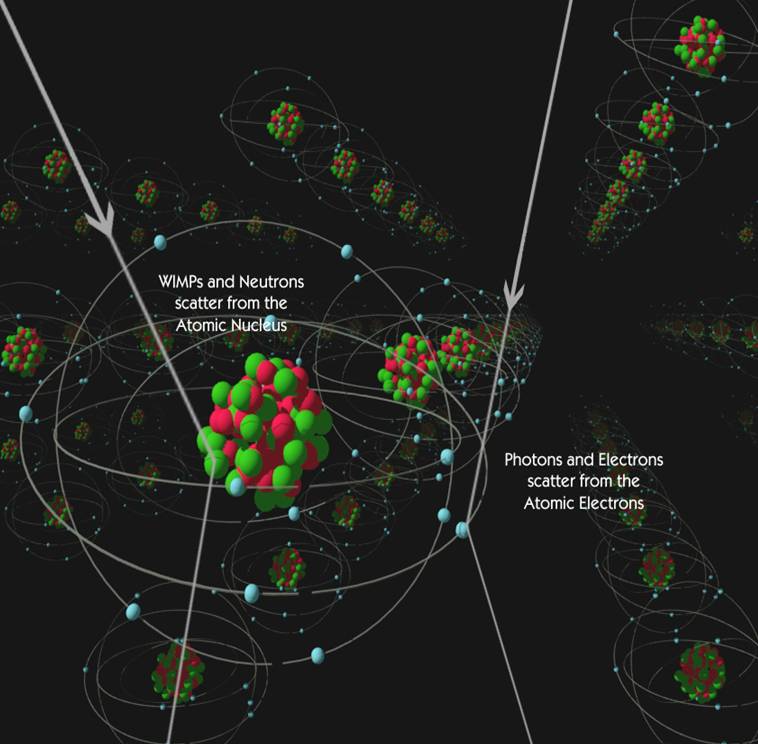 A schematic showing the usual interaction between incoming particles, including WIMPs, and atoms in a dark matter detector. Credit: University of California, Berkeley

There exists solid evidence that about 27 percent of the universe is composed of a hypothetical type of matter known as dark matter.  This form of matter appears invisible since it does not absorb or emit radiation at a significant level, and astronomers infer its presence largely through its gravitational effects on the rest of the matter in the universe. The leading class of candidate particles for this invisible matter is collectively known as Weakly Interacting Massive Particles (WIMPs), and the experimental search for the discovery of such particles is extremely active. So far, the results have been inconclusive, with some experiments finding evidence for slightly different types of WIMPs and many others finding no evidence at all (one such conflict is described in this astrobite).

To be consistent with the standard cosmological model, any type of dark matter should have a small but measurable probability of interacting with normal matter (known as a cross section). WIMPs are believed to have masses in the range of 10 – 1000 GeV and be detectable through their collisions with atomic nuclei in detectors on Earth. When a WIMP collides with an atomic nucleus, it transfers energy to the nucleus causing it to recoil in a particular way, which can be measured in the detector. The difficulty in this measurement lies in the fact that many other types of particles will deposit energy in the detector as well and at a significantly higher rate. Experiments must pick out the dark matter collisions from these background events like a needle from a haystack.

The Cryogenic Dark Matter Search (CDMS) collaboration reports to have found  three such needles in its data, which was taken using detectors filled with silicon atoms stored deep underground in the Soudan mine in Minnesota. The three events are consistent with a dark matter WIMP of mass 8.6 GeV, roughly nine times heavier than the proton. The authors estimate that there is a 99.8% probability that these three events are caused by a dark matter particle colliding with a silicon nucleus rather than one of the many background events masquerading as a WIMP collision. While a 0.2% chance of being wrong is adequate accuracy for most things, the authors are careful to note that they do not believe their results are significant enough to be considered a dark matter discovery. In the particle physics world, discoveries are typically reserved for results with 99.9999% confidence levels. 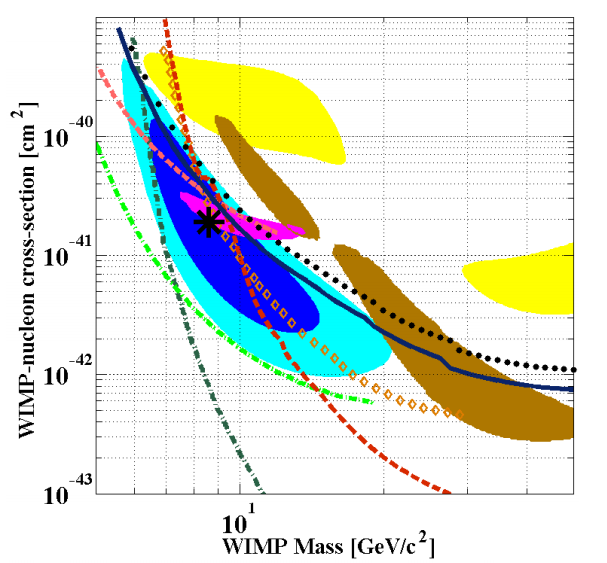 A summary of experimental results for the cross section and mass for WIMPs.  The blue and cyan filled regions show possible signal areas derived from the CDMS result at the 68% and 95% confidence levels. The black asterisk shows the CDMS best-fit result. Results from other experiments are shown in the other colors as the filled regions marking possible regions for WIMP signals and the dotted lines indicating upper limits. Credit: Figure 4 of Agnese et al. (2013)

Another reason for the caution displayed by the CDMS collaboration may be the overall inconsistency of dark matter results from separate experiments. A quantitative summary of these results are displayed in the figure to the left, which shows upper limits as dotted lines and areas where a WIMP would produce a signal as filled regions. The blue and cyan filled regions mark the 68% and 95% confidence levels of the CDMS result, with the best-fit result marked as the black asterisk. The results of various other experiments are shown in the other colors. While  the CDMS result does agree with the results of some experiments, it is also at odds with several other results. These discrepancies may be caused by the extremely difficult nature of dark matter detection, where a careful analysis of uncertainties is both difficult and extremely necessary. Clearly, much more investigation is needed to reconcile the current results of dark matter search experiments. Nevertheless, the CDMS collaboration has found new evidence that indicates that astronomers could be closing in on the elusive dark matter particle.