The Kepler mission recently announced the discovery of three new potentially habitable planets: Kepler-69c, 62e and 62f. Being habitable boils down to the planet orbiting its star in at the right distance (the habitable zone) in order to maintain a temperature that would allow liquid water to exist on its surface. A crude estimate of the habitable zone can be derived from simply equating the input energy from the star with the output energy radiated from the planet’s surface. A realistic description, however, requires accounting for the complex physics of a planet’s atmospheric composition and climate processes. This paper attempts to find the smallest habitable orbits possible (i.e. the inner edge of the habitable zone) by including these complex processes in the calculations. A similar approach to refine the inner and outer edges of the habitable zone was described in this astrobite about Kopparapu et al. (2013).

Why do the authors only focus on the inner edge of the habitable zone? The outer edge occurs where a planet becomes too cold to support life, but if a planet supplies its own heat from radioactive decay processes and traps that heat efficiently, the planet might not even need a star to be habitable! The inner edge, on the other hand, depends on how efficiently the planet can cool.

The most important process governing a planet’s temperature (aside from its proximity to a star) is the magnitude of the greenhouse effect. The greenhouse effect occurs when certain gases are present in the atmosphere that are transparent to visible light (the incoming radiation from the star) but more opaque to infrared light (the outgoing radiation from the planet’s surface that allows it to cool). This raises the surface temperature of the planet, which is undesirable when trying to find the absolute inner edge of the habitable zone. 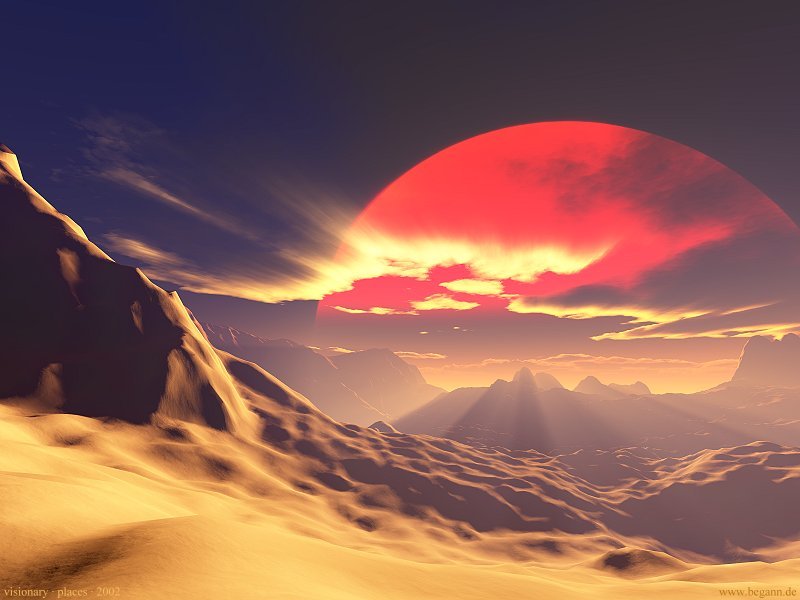 Figure 1. An artist’s conception of a desert planet. (Image from www.begann.de)

Two global chemical cycles dictate the magnitude of the greenhouse effect. The first is the water cycle. Water is a potent greenhouse gas, and if the temperature of a planet rises, more water vapor can accumulate in the atmosphere, increases the greenhouse effect and leading to a positive feedback cycle. Thus, given the need to effectively cool the planet, it is not surprising that the main result of this paper is that planets very close to their star can only be habitable if they are dry desert planets. An artists conception of a desert planet is shown in Figure 1.

The other cycle is the carbon-silicate cycle, which regulates CO2, another greenhouse gas. Water plays a role in this cycle as well when rain removes CO2 from the atmosphere. The CO2 then reacts with dissolved rocks to form calcium carbonate, which is typically deposited on the ocean floor. Eventually, the sea floor is subducted into the mantel, the carbon is converted back to CO2, and it is released back into the atmosphere by volcanic activity. So if the desert planet is too dry, there will be no rain to wash CO2 out of the atmosphere, and the greenhouse effect will make the planet uninhabitably hot. This paper calculates the minimum humidity needed to avoid this fate.

The authors generate models of planet atmospheres in which they calculate — at each elevation in the atmosphere — the temperature, pressure, and the amount of upward and downward radiation over a range of wavelengths.

The radiative processes used in their models include Rayleigh scattering, absorption of photons by greenhouse gases, emission and reflection from the planet’s surface, absorption of ultraviolet photons by oxygen and ozone, and collision-induced absorption (gases like H2 and N2 can only absorb a photon while colliding with another molecule). The models also include many thermodynamic processes like convection, the heat capacity of various gases, and the latent heat of water.

There are a number of input parameters the authors could vary when building their models. These include the pressure, temperature, and gravity at the planet’s surface, which sets the foundation for the rest of the atmospheric structure. The pressure depends on the amount of atmosphere the planet has and the gravity simply depends on the mass and radius of the planet.

The authors are also free to set the water content (humidity) and CO2 content because calculating them in a self-consistent manner would require knowing the details of the water cycle (including the 3D weather patterns and geography of oceans and continents) and of the carbon-silicate cycle (including tectonics and volcanic activity).

Finally, the authors set the albedo (reflectivity) of the planet’s surface and the spectral type of the star from which the planet is receiving radiation (which determines not only how much flux reaches the planet, but also at which wavelengths).

The authors use their models to find the inner edge of the habitable zone by first choosing surface conditions that could host liquid water (a combination of surface temperature, pressure, and humidity) and are not too hot to destroy DNA (cooler than 500 K). They then generate their model atmosphere and find the incoming radiation required to create these surface conditions, from which they calculate the size of the planet’s orbit. 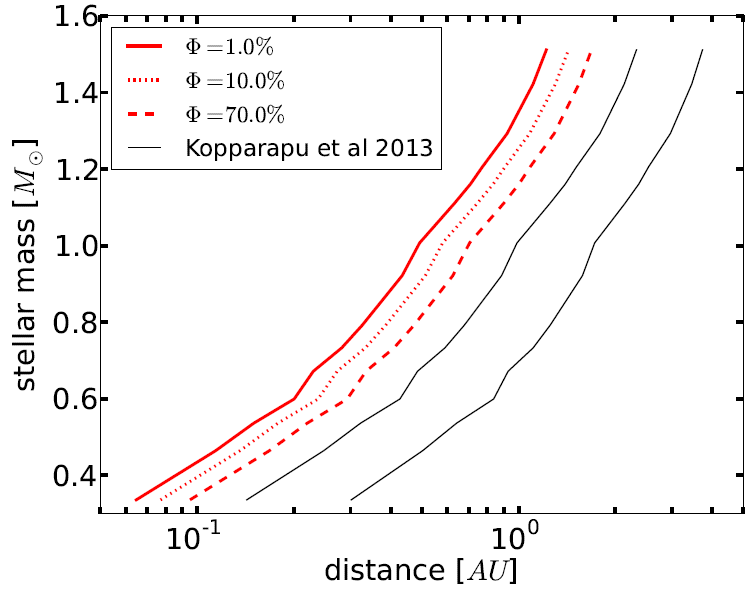 The authors find that, out of all the parameters, relatively humidity has the largest effect on the location of the inner edge of the habitable zone, with 1% humidity being optimal (see Figure 2). To put that in context, the humidity in Tucson today was 5%, and the air felt very dry.

The habitable zone was also significantly closer to the star than estimated by previous work, including Kopparapu et al. (2013). The solar system could host a habitable planet at 0.5 AU if it had the perfect atmospheric conditions.

The effects of other input parameters were also discussed. Surface gravity does not have a strong effect on habitability; surface pressure needs to be between 1 and 10 bars to allow the necessary precipitation (depending on the planet’s rotation rate and the spectral type of the star); and a high albedo also helps keep the planet habitable, which should not be a problem because a desert-like surface is expected to be fairly reflective.

The authors also estimate the rate at which water would be lost to space from their model atmospheres. They find that this is not a problem for most of the habitable planets they model, provided the surface gravity is not too low.

Figure 3 shows the super-earth exoplanets detected so far, and if they are habitable according to this new formulation. The authors find that this expanded habitable zone could increase the number of habitable planets by a factor if 2-3, although it is unlikely that all super-earths in the newly expanded zone have the necessary atmospheric properties to be habitable.

Where should we look for such planets? The authors argue that small desert planets are more likely to form around metal poor stars with small protoplanetary disks. Determining the atmospheric properties of such planets could be done if they transit by using transmission spectroscopy. The authors make spectral models and determine, however, that it would be difficult to probe the surface conditions of such planets unless the surface gravity is fairly small. Nevertheless, the prospect of adding new targets to the search for biosignatures is very exciting.

So are desert planets the most likely place to find extraterrestrial life, and will the first aliens we discover be space cacti?

Figure 3. The known super-earth exoplanets (and solar system planets) are plotted in comparison with the newly defined inner edge of the habitable zone and the boundaries of the habitable zone from Kopparapu et al. (2013). Note that Venus would be a habitable desert planet if its atmosphere were different. The left panel shows confirmed planets, the right shows planet candidates from Kepler. From Figure 12 of the paper.