The Mystery of the Sickle in the Carina Nebula

One of the simplest joys in astronomy is finding an oddly-shaped blob in the sky and trying to figure out what it is and how it got there. The authors of this paper were examining images of the Carina Nebula when they spotted a “peculiar arc-shaped feature” and decided to study it. The story of what happened next is a great example of how astronomers use every scrap of data available for an object to understand what’s going on.


The Carina Nebula is a beautiful star-forming region about 2300 parsecs (7500 light years) from here. The authors were intrigued by a crescent-shaped structure in images of the Carina Nebula. This structure, which the authors dubbed “The Sickle”, is asymmetric and associated with a B1.5 V star called MJ 218. In Fig 1, MJ 218 is the brightest star inside the curve of the Sickle (if the Sickle were Pac-Man, MJ 218 would be a dot about to get chomped). The authors did a literature search to see if anyone else had studied this structure before. The Carina Nebula is a pretty popular target for observers, so they found plenty of data for the Sickle at multiple wavelengths. 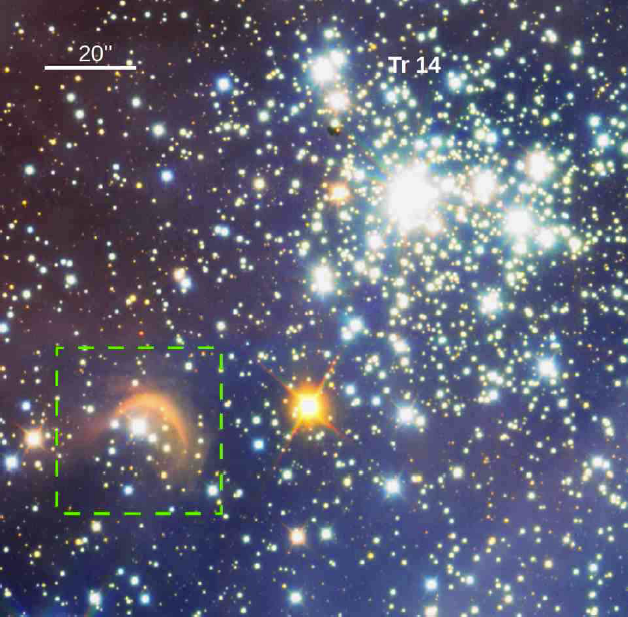 Fig 1: HAWK-I image of the Sickle (inside green dashed lines) and surrounding area. This RGB composite image is made up of J-, H-, and Ks-band data (shown in blue, green, and red, respectively).

The downside of astronomy is that we can’t reach out and touch the objects we study (with a few notable exceptions), so the only information we have about them comes from light. The upside of astronomy is that there’s an enormous amount of information contained in that light, especially if you look at different regions in the electromagnetic spectrum. The authors found optical images from the Hubble Space Telescope (HST) in the literature and took their own near-infrared observations (shown in Fig 1) with the HAWK-I instrument at the European Southern Observatory’s Very Large Telescope. These observations and measurements of the star’s proper motion showed that MJ 218 is moving in the direction of the Sickle.

Previous radio observations of this area did not detect the Sickle or the star, but the authors found something interesting in far-infrared Herschel data and their own submillimeter observations with LABOCA on the APEX telescope. These data, shown in Fig 2 as contours overlaid on the HAWK-I image, revealed a “clump” of dust and gas on the opposite side of the Sickle from the star. This led the authors to wonder if these three objects — the Sickle, MJ 218, and the clump — were interacting. 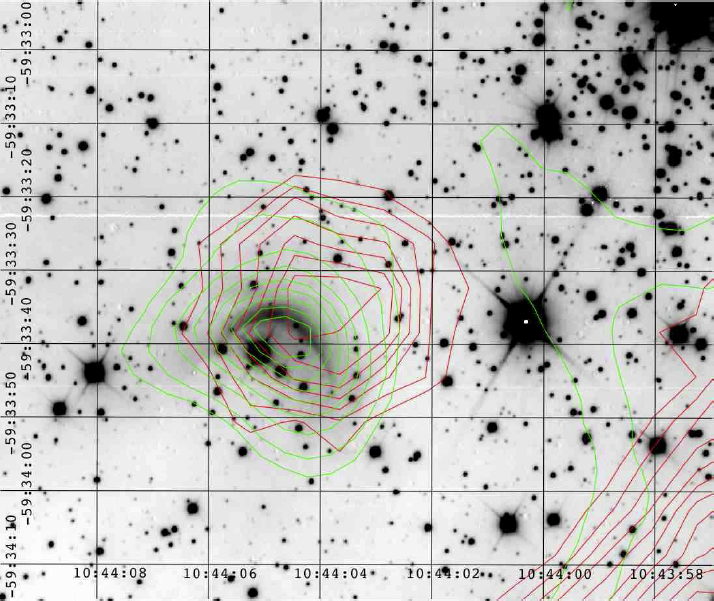 Fig 2: The HAWK-I image of the Sickle from Fig 1 with 70µm (in green) and 870 µm (in red) contours overlaid (from Herschel and APEX/LABOCA, respectively).

On the other side of the spectrum, observations from Chandra showed high X-ray emission coming from the star MJ 218, which is very unusual for a B1.5 V type star. This suggests that MJ 218 has a low-mass companion emitting X-rays. The authors went back to the HST data to try to find this companion but were unsuccessful, probably because MJ 218 is so bright that it outshines its little friend.


Now that they had gathered all these data at different wavelengths, the authors needed to put the puzzle pieces together to find an explanation of the strange shape of the Sickle. Their first theory was that MJ 218 was sitting just inside the edge of the dusty clump, and the Sickle was the edge of an expanding bubble of stellar wind surrounding the star. They tested this theory by modeling what the clump would look like if you stuck a B1.5 V star next to it. After about 10,000 years (in model time, not computer time), the model showed a crescent shape the size of the Sickle (see Fig 3). 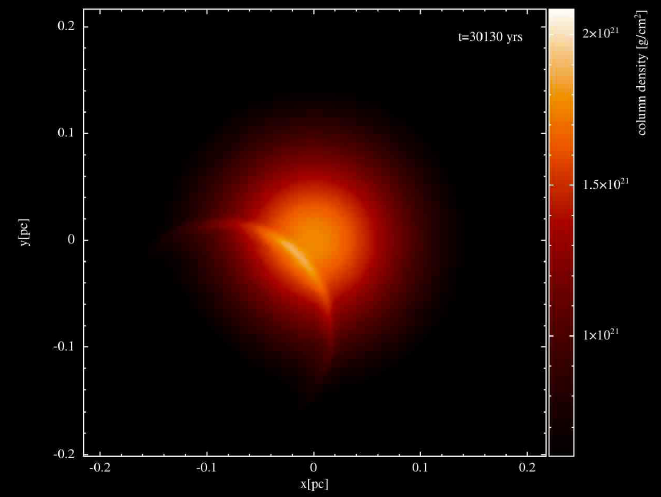 Fig 3: The density plot produced by modeling a stellar wind bubble next to a dust clump. This plot does not show the star, just the density of the dust in the clump and Sickle.

This seems like it solves the mystery of the Sickle — it’s a stellar wind bubble! But the authors realized that there were problems with the theory that the star was sitting inside the clump. For example, MJ 218 couldn’t have been born inside the clump — the clump would long since have been blown away by the wind.

The authors took note of the fact that the star is moving at a high velocity in the direction of the Sickle and developed a second theory — perhaps the Sickle is a bow shock, the region where the stellar wind interacts with the interstellar medium (ISM). They measured the distance between MJ 218 and the Sickle and found it to be consistent with the distance you’d expect to see between a star moving at that velocity and its bow shock.

So the theory that the Sickle is a bow shock formed by MJ 218 was consistent with the data. But this theory didn’t involve the clump at all; the clump isn’t needed to form a bow shock, so it might not be interacting with MJ 218 and the Sickle. It could just be hanging out in the background and only appear next to the Sickle by coincidence.

But the authors still had one piece of information about the Sickle that they hadn’t explained yet — it’s asymmetric around the direction that MJ 218 is moving (see Fig 4). This could indicate that the clump is influencing the shape of the Sickle. They modeled how a bow shock would form next to a clump of dust and found that they could reproduce this asymmetry, implying that the Sickle is a bow shock interacting with the clump. Finally, they had a theory that could explain the interaction of all three objects! MJ 218’s motion through the ISM is forming a bow shock, the Sickle. The star happens to be passing a clump of dust and gas, which gives the bow shock an asymmetric shape. 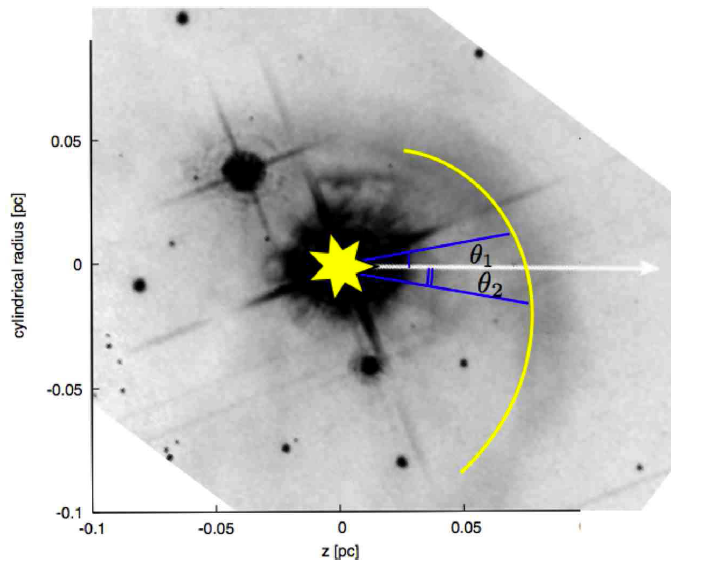 Fig 4: Model of a bow shock (yellow curve) created by a star moving at a certain velocity (white arrow) past a dusty clump, overlaid on a Hubble image of the Sickle.

Like most happy endings in astronomy, the authors’ bow shock solution to the mystery of the Sickle opens up more questions. What is the clump made of? How will the bow shock affect the internal regions of the clump? Could it trigger gravitational collapse inside the clump and lead to star formation? As always, more data, modeling, and some hard thinking will be needed to answer these new questions.