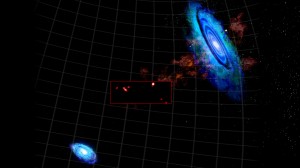 Astronomers recently found seven clouds of neutral hydrogen gas (HI – “H” and roman numeral one) spread out between the galaxies M31 and M33. Could these clouds have condensed around dark matter-rich filaments, or are they leftover gas strewn across intergalactic space from a galaxy interaction event that occurred billions of years ago? Wolfe et al. use new high resolution radio observations from the Green Bank Telescope (GBT) to sort out the origin of these mysterious clouds.

The presence of neutral hydrogen gas in the region between M31 and M33 was confirmed last year with the GBT by Lockman et al. (2012). The velocity of the gas is similar to the systemic velocities of M31 and M33, confirming that it is not Milky Way gas. But the sensitivity of these initial observations was not very high. Longer integration time were needed to get sensitive high resolution images of the gas. The high resolution determines whether the gas is diffuse or clumpy. This is important for determining the origin of the gas – intergalactic filament or debris from tidal interaction between the two galaxies.

Intergalactic filaments between galaxies can serve as a bridge to funnel gas into galaxies. This has been proposed as a mechanism to fuel further star formation in spiral galaxies for a few more billion years from the gas in the intergalactic medium. However the gas seen in the space between the galaxies could have come from a tidal interaction event. When M31 and M33 came much closer together a few billion years ago, the gravitational force of the two galaxies could have stretched gaseous material between them in a tidal tail. 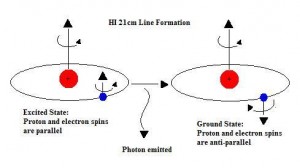 Figure 2 – Illustration of the spin-flip transition that gives rise to the 21 cm line.

The HI observations of the clouds were made using the 21 cm line of neutral hydrogen. This line arises from the spin alignment transition in the ground state. As illustrated in Figure 2, when the spin alignment of the proton and the electron switch from aligned parallel to anti-parallel, the atom emits a photon corresponding to the small change in energy states – one with wavelength of 21 cm. The 21 cm line is extremely useful for mapping hydrogen gas, since the symmetric H2 molecule does not emit strongly in the radio.

Wolfe et al. observed the region of the HI gas again with the GBT, this time with higher sensitivity and higher resolution. They found the HI gas formed seven distinct dense clumps (see Figure 3). About 50% of the HI in the region is in the clouds. The clouds are about the size of dwarf galaxies. However, there are no stellar overdensities in the region, so they are not thought to be dwarf galaxies.

Figure 3 – Map of the 21 cm emission detected by the GBT in between M31 and M33. Six of the seven clouds are visible in this image (labeled numerically). The seventh is visible when the data is smoothed to a lower resolution. The directions to M31 and M33 are marked by the arrows. 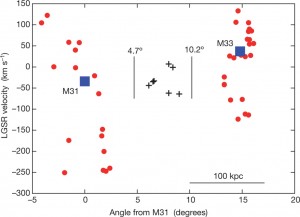 Figure 4 – This position-velocity plot shows the angular distance from M31 (x-axis) vs. the velocity (y-axis) for M31, M33 (blue squares), high velocity clouds (red circles), and the new clouds detected with the GBT (black plus signs). The new clouds occupy a distinct region in position-velocity space compared to other Local Group objects.

There are several factors that make these clouds look distinctly different from the high velocity clouds (HVCs) that surround M31 and M33. First, they are much further away from either galaxy than any of the HVCs. The plot of position vs. velocity (Figure 4) shows the HVCs are clustered around their host galaxies in the position axis, while the gas clouds occupy a space distinctly their own. The velocities of the clouds also distinguish them from HVCs. The new clouds have velocities similar to M31 and M33, while the HVCs tend to have a much larger spread in velocity.

The authors identify several possible origins of the clouds between M31 and M33.
1) The clouds are primordial, gas-rich objects, like dwarf galaxies.

2) The gas has accreted onto local overdensities of dark matter.

3) The clouds could be tidal dwarf galaxies – a type of irregular dwarf galaxy that form in tidal tails after a tidal galaxy interaction.

4) The clouds are transient objects that condensed from an intergalactic filament.

The authors prefer this last scenario. If there is a galactic filament connecting the two galaxies, it can funnel gas into the galaxies and fuel star formation for a few more billion years.