Some History
Shapiro time delays are one of the four tests of general relativity possible in the solar system. Because mass curves spacetime, light traveling close to a massive object must take a longer path to reach a target than if spacetime were flat, as this video and animation show. Irwin Shapiro was the first to test this phenomenon by bouncing radar signals off Venus and Mercury in the 1960s. The time delay for these signals was only about 200 microseconds.

This paper measures a Shapiro delay in a binary pulsar system called PSRJ1910-5959A. This pulsar has been previously studied but the results here include more data that allows for a more refined analysis. (See here and here for previous Astrobites posts on pulsars). This pulsar has a spin period, how long it takes the pulsar to spin about its axis, of 3.27 ms. The companion star to the pulsar is a helium white dwarf, determined by independent spectroscopic observations with the ESO Very Large Telescope and the Hubble Space Telescope. The white dwarf orbits the pulsar with an orbital period of 0.84 days. Though this pulsar visually appears to be part of globular cluster NGC 6752, it is a matter of debate whether this is actually true or is just an illusion. If the pulsar is part of the globular cluster, this represents the first time a Shapiro delay has been detected for a pulsar in a globular cluster and offers important insights into the history of the cluster.

As the white dwarf passes between our line of sight and the pulsar, there is a slight delay in the pulses from the pulsar. Since pulsars pulse so regularly, any irregularity is a sign that something interesting is happening. This delay is on the order of microseconds; it took observations spanning 10 years to detect it. Finding a Shapiro delay is exciting because it allows for very tight constraints on the mass of the companion star and the pulsar, as well as the inclination of the system.


How They Did It
To detect this delay, the research team used the 64m Parkes Radio Telescope located in Australia. For over 10 years, they regularly monitored this pulsar to detect times of arrival for the pulses. To accurately time a pulsar, astronomers fold the data on itself at the pulse period to increase the signal to noise. This yielded the team ∼1000 usable pulse timings. Check out this post for more details on the methods radio astronomers use to measure pulsar timing.

The research team used a model called the DD binary model to precisely measure the expected time of arrival for each pulse and the residuals for each detected pulse, the amount each pulse varies from the best fit. The DD binary model includes two parameters called the range and the shape that are related to the companion mass (the white dwarf) and the orbital inclination of the system. Check out Table 1 in the paper to see all the parameters that were measured or derived for this fit, and specifically note how amazing it is that pulsar periods can be measured to thirteen places past the decimal point! 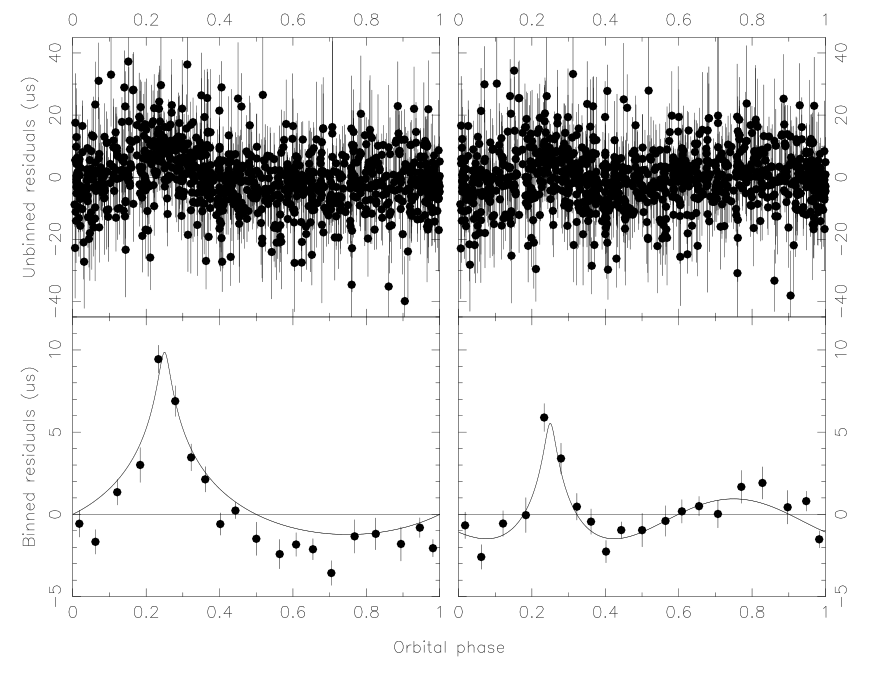 To detect the Shapiro delay, a fit to the residuals is then determined, shown in the figure to the left. By finding the best fit to all the parameters of the model, then setting the companion mass to 0 and the orbital inclination to 90 degrees, a fit is determined and the remaining residuals can be seen in the top left of the figure. The team then binned and averaged the results to find an obvious harmonic in the fit of this data (bottom left). By  fitting again and removing the parameters related to the Shapiro delay,  they form the plots on the right side of the figure. Binning again brings out another harmonic, called the third harmonic, seen in the bottom right. Placing the binary companion in an elliptical orbit can explain this first harmonic, but the third harmonic can only be due to a Shapiro delay present in the data. The solid line in the figure shows the theoretical prediction of the harmonics, which matches the data well.

Other Thoughts
The proper motion of this pulsar must be measured to determine once and for all if it is part of the globular cluster. If it is, this system will prove very useful in understanding mass-radius relationships for helium white dwarfs. It is difficult to determine the mass and the radius of white dwarfs using optical observations. Doing so requires white dwarf spectral models to estimate the surface gravity and effective temperature, then infer the mass and radius. Observations that do not rely on these models are needed so we can understand the interaction of these fundamental properties better.