The light emitted by stars and Active Galactic Nuclei that permeates the Universe constitutes the Extragalactic Background Light (EBL). It is a sea of photons that were emitted by these sources and reprocessed by the interstellar medium (gas and dust) of the host galaxy.  When a high energy photon coming from a source far away traverses the EBL, there is some probability that it will interact with EBL photons through a process called two-photon pair-production, the annihilation of the two photons and subsequent production of a pair of particle-antiparticle. This means that some of those energetic photons will not arrive at our telescopes, i.e., the high-energy photon flux from distant sources is attenuated by the EBL. This is the topic of the work of Domínguez et al., featured in today’s astrobite. The cosmic gamma-ray horizon, constrained by the authors of this paper, is not only a measure of the opacity of the Universe to high energy photons, it is also a cosmological probe and a means of estimating distances to energetic sources.

Suppose there is a very energetic source of photons somewhere in this sea of EBL photons. The medium through which the very high energy (VHE) photons have to travel on their way to us is not transparent: there is some probability that the VHE photon will encounter an EBL photon, undergo pair-production and be prevented from reaching us. Because the density of EBL photons depends on redshift (the average rate of star formation is different at different epochs in the Universe), the probability of pair-production depends on redshift. It also depends on energy of the VHE photon: the total energy must surpass the rest energy of the particles created. The easiest barrier to surpass is the rest mass of an electron-positron pair, since these have tiny masses. Because photons in the EBL typically have lower energies than the electro-positron rest mass, you need a VHE photon to interact with a low-energy photon from the EBL to produce one such pair.

Given the probability of interaction, there will be a maximum effective distance that a VHE photon can travel before before it encounters an EBL photon. Astronomers like to think about this in terms of optical depth (τ): the intensity of light that leaves a medium is, Iout, and the incoming intensity, Iin, are related via

The cosmic γ-ray horizon (CGRH) is the energy at which the optical depth is equal to unity (although you might run into slightly different definitions) and it is a function of redshift.

If we have a good number of high energy extragalactic sources and we know how many photons they emit as a function of energy, we can compare that intrinsic spectrum to the observed one. The difference will be caused by attenuation by the EBL.

The preferred sources for this study are blazars.  A blazar is a type of Active Galactic Nuclei that is accreting matter into the central supermassive black hole and channeling some of if out in the form of a jet that is pointing towards the Earth. A blazar emits very high energy (between 30 GeV and 30 TeV) photons through synchrotron emission, the radiation emitted by ultra-relativistic electrons that are accelerated in a curved trajectory, and inverse Compton scattering, the scattering of low energy photons by energetic electrons, resulting in a higher energy photon.

The main problem to overcome when trying to constrain the CGRH is our ignorance of the intrinsic energy spectrum of the source. This is to say, if the photons are already attenuated when they reach us, how can we know what the spectrum was that was emitted by the blazar? If one has information on the observed blazar energy spectrum throughout a large range in energies and a model for the spectrum emitted by the blazar, it would be possible to measure the CGRH. The second reason why this is hard is that blazars are highly variable: to build a model for the energy emitted by the blazar across a large energy range, all the observations used need to be roughly simultaneous.

The authors of this work have put together, as simultaneous as possible, observations of 15 blazars from the Fermi-LAT telescope, a space-based instrument dedicated to observing extremely energetic phenomena in the Universe through its γ-ray detector, from imaging atmospheric Cherenkov telescopes (H.E.S.S., MAGIC, VERITAS) and from a compilation of data by other authors covering the electromagnetic spectrum from the radio to the γ-rays. They have modelled the observed spectrum of the blazars with contributions from synchroton radiation and inverse Compton. A fit to the spectrum between the infrared and the γ-ray wavelengths gives them a good estimate of the intrinsic spectrum of the blazar, up to tens of GeV. The flux measured by Cherenkov telescopes in the range of several tens of GeV to several tens of TeV is affected by EBL attenuation. By comparing this flux to the fit of the intrinsic spectrum, they can estimate the optical depth and hence, the CGRH. Their results do not depend on any model assumed for the EBL, but they make some physically motivated assumptions for obtaining constraints on the optical depth.

We reproduce figure 2 of the paper below. This figures shows the constraints on the CGRH from the blazar multiwavelength catalog put together by the authors. Not all 15 blazars yield a point in the plot because in some cases uncertainties were too large to constrain the CGRH or because the resulting fit was inconsistent with an attenuation at high energies (which, based on the observations, was probably due to the variability of the source). The resulting CGRH is consistent with the predicted CGRH based on a model of the EBL constructed in a previous paper. 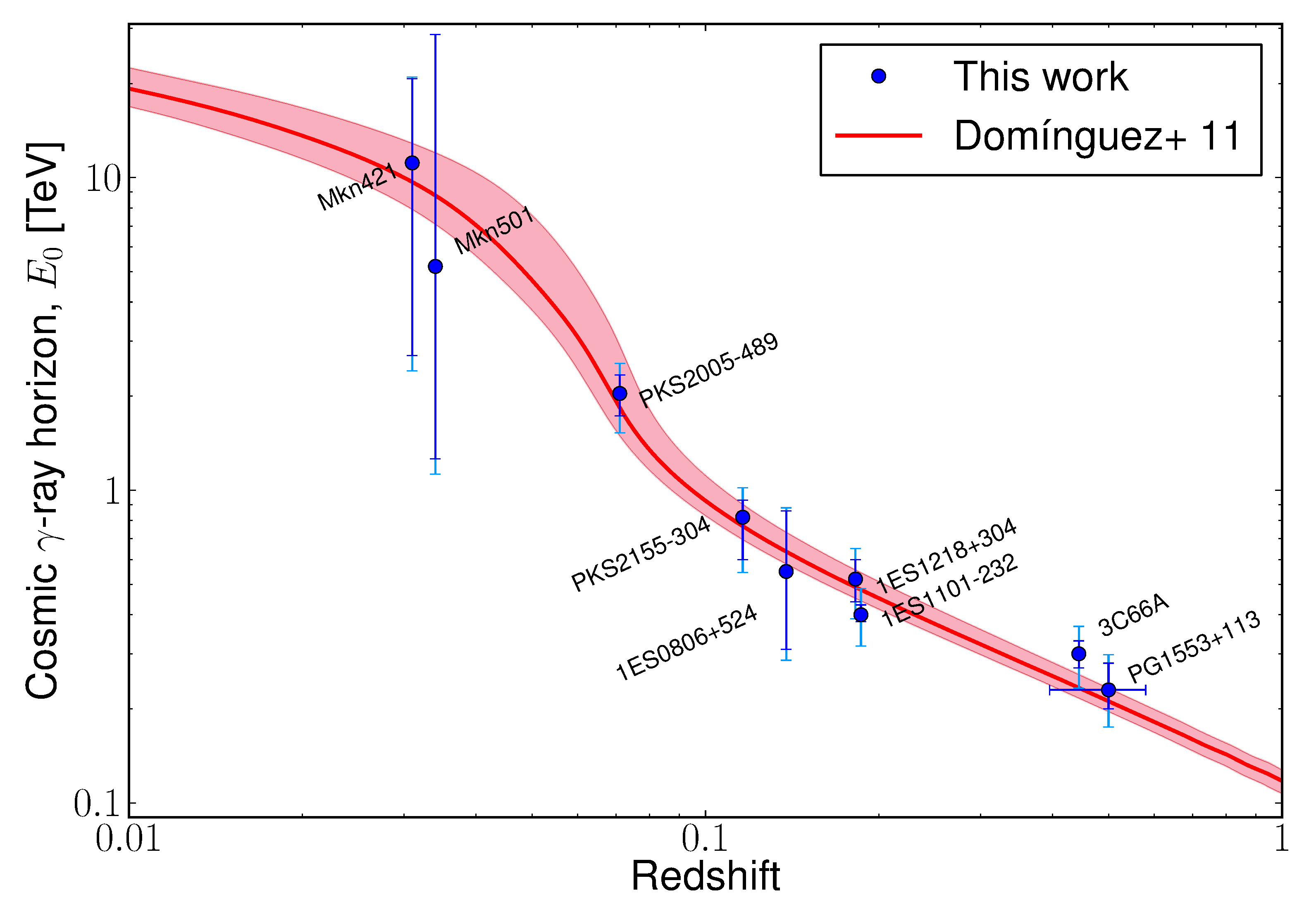 The work by Domínguez et al. has many implications. One interesting application of the CGRH is the following: if a blazar has an unknown redshift, it would be possible to infer it by measuring its CGRH. Moreover, the CGRH can be used to constrain the cosmological parameters, as shown in this other paper.