Cosmic rays (CRs) are high energy charged particles (e.g., electrons, protons, and nuclei) traveling very close to the speed of light. They originate from energetic sources such as supernova remnants, gamma ray bursts, active galactic nuclei, the colliding winds of binary massive stars and compact binaries, and pulsar wind nebulae. These particles have diverse and important influences on the physics and chemistry of molecular clouds (MCs) because they can easily ionize molecular hydrogen (H­2). Furthermore, CRs act as an important heating source in MCs because of the secondary electrons liberated in the ionization process when a CR strikes an H­2 molecule.

The galactic center is an exciting place to study the influence of CRs on molecular clouds since it hosts a variety of high-energy and X-ray sources. These high energy objects (e.g., supernova remnants, dense star clusters, massive stars, supermassive black hole) are effective at accelerating charged particles to relativistic speeds thus suggesting the galactic center, and the volume around it, should have a higher CR flux than the rest of the galaxy.

The CRs that contribute the most significantly to ionizing H2 in molecular clouds have energies < 100 MeV. CRs with energies below 1 GeV are deflected by the solar wind and magnetic field making them difficult to observe in our vicinity. Hence, the CR ionization rate within molecular clouds must be inferred by some other method such as measuring the abundance of H3+ atoms in MCs.

So just how is H3+ made? When a CR collides with an H2 molecule it will liberate an electron producing H2+. This ion will combine with another H2 molecule and the by-products of this reaction are a  H3+ ion and a H atom. Because this reaction is very rapid, all of the H2+ will quickly form H3+. Therefore, the H3+ formation rate is directly proportional to the CR ionization rate (i.e., number of CR ionizations per second). This makes inferring the H3+  column densities of molecular clouds ideal for determining the CR ionization rate. 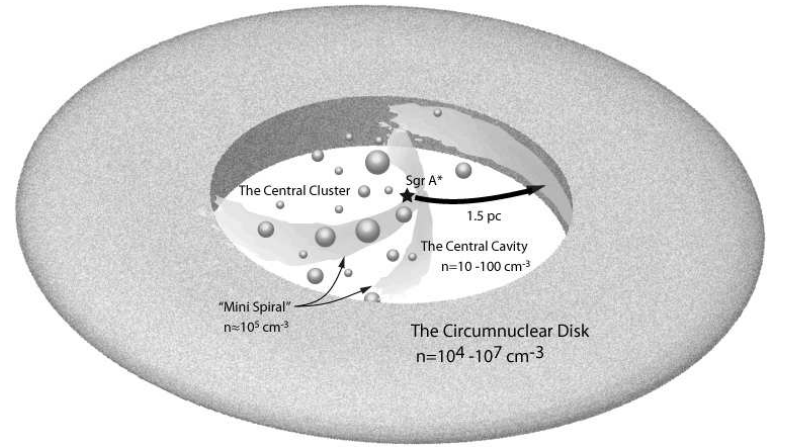 Schematic view of the central few parsecs of the galaxy (central molecular zone), showing the central black hole, Sgr A*, stars in the central star cluster, and the circumnuclear disk which contains dense molecular clouds.

In this article, the authors measure the amount of H3+ in the Central Molecular Zone of our galaxy – a region of dense and diffuse molecular clouds within a couple parsec from Sgr A* (see figure above) – to determine the cosmic ray ionization rate of the galactic center. They obtain multiple infrared absorption line spectra of H3+and 13CO, to trace the dense molecular gas, for two regions in the Central cluster with the Cryogenic Infrared Echelle Spectrograph on the Very Large Telescope in Chile. CRs that originate from this region will be absorbed by the dense Cold Molecular Zone along our line of sight producing H3+. The resulting spectra are shown in the figure below. 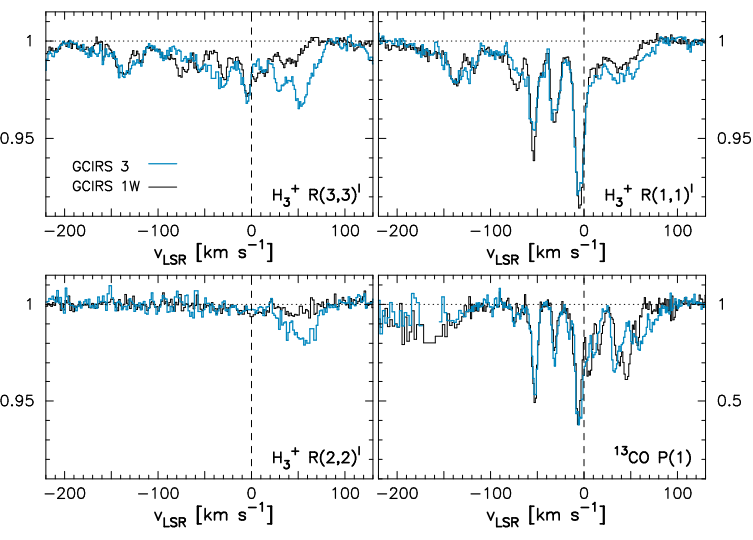 The spectra above span a wide range of velocity. Looking closely, you can see that the H3+ (3,3) line covers a larger velocity range than the H3+ (2,2) line suggesting that most of this (3,3) absorption is occurring in warm (T>150 K), low-density clouds. The narrow absorption features in the 13CO J=1→0 and H3+ (1,1) spectra at velocities near 0, -30, and -50 km/s are associated with cold and dense gas in the foreground molecular arms. Whereas, the shallow trough of absorption seen in H3+ (1,1) in the velocity interval of -200 to 0 km/s, which is not traced by 13CO J=1→0, implies that this gas is warm and low-density containing little or no CO. The authors find that the wide velocity range and large spatial extent of this warm gas must be located within the CMZ, and expanding outward from the center. 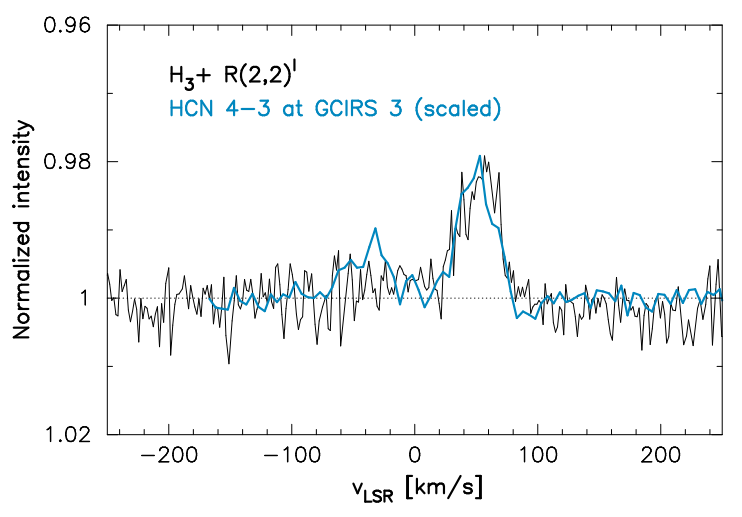 Comparison of the line profiles of the H3+ (2,2) absorption line and the inverted HCN J=4-3 emission line at the location of GCIRS 3.

The H3+ (2,2) spectra for their pointing towards GCIRS 3 shows a broad absorption feature at +50 km/s. The authors suggest that this absorption occurs in a well-known giant MC located in the Cold Molecular Zone. They further compare their spectroscopy with radio HCN J=4→3 emission maps and spectroscopy, which probe high densities, confirming that this H3+ (2,2) absorption spectra is originating from dense gas in the Cold Molecular Zone. The figure above shows a comparison of the line profiles of the HCN J=4→3 (inverted) emission line and the H3+ (2,2) absorption line for the dense MC with a line of sight velocity at 50 km/s. This comparison confirms that both lines belong to the same source.