We’ve discussed some of the discoveries of transiting (or non-transiting!) planets found by analyzing data from the Kepler telescope. As of this writing, Kepler’s eye has found 2,740 “planet candidates,” events that appear to be transiting planets, but have not been fully vetted. Less than five percent of all planet candidates have been confirmed as true planets, while the rest may be “false positive” eclipsing binary star systems masquerading as planets. Estimates of the false positive rate vary widely, from 1 percent to 35 percent. Often planets are confirmed by observing gravitational interactions, either through Doppler spectroscopy to observe the transiting planet’s gravitational pull on the host star, or through a search for transit timing variations, when mutual gravitational interactions between planets orbiting a star cause the transits to arrive systematically early or late. The magnitude of both of these effects is proportional to the planet mass, so these methods are best suited to confirming massive planets. Earth-sized and smaller planets often must be confirmed by other methods, as in this paper.

Each star observed by Kepler is given an identifying “Kepler Input Catalog” number (this particular star is KIC 8478994). As data is collected by the telescope, it is periodically analyzed for events which look like transits. Kepler has searched more than 150,000 stars, measuring their brightness every 29 minutes. After four years of observations, this is a lot of data! Because there’s so much data, this step is done by a computer. Any event in the light curve that is statistically significant at the 7σ level (so that the size of the transit “dip” is 7 times the size of the noise) is recorded as a Threshold Crossing Event (TCE). There are currently more than 18,000 such events recorded for 11,000 stars in a publicly-available table. 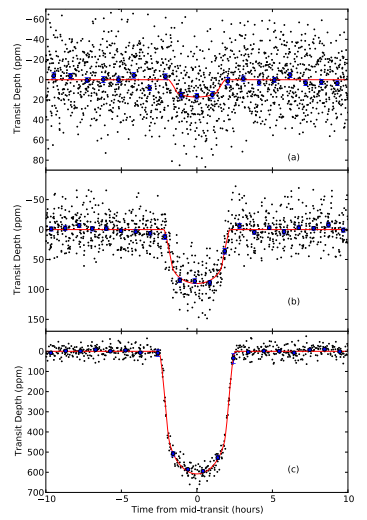 Three planet candidates found orbiting KIC 8478994. The smallest planet has a transit depth of 12 parts per million, corresponding to a potential planet with a radius smaller than Mercury.

The authors find signals corresponding to three potential planets orbiting KIC 8478994, which was given the new name Kepler Object of Interest (KOI) 245. The smallest, innermost signal corresponds to a planet with a 13.4 day period and a radius of 0.30 Earth radii, 20% smaller than Mercury! This possible planet has a transit depth of only 12 parts per million, and the star is one of the brightest observed by Kepler. In each observation, more photons will be observed, allowing for a more precise measurement of the observed stellar flux for KOI-245 than for the average candidate system. In fact, the authors estimate they could only detect a signal this small around 0.5% of Kepler‘s stars. The opportunity to confirm and characterize a potential sub-Mercury-sized planet will therefore be rare in this mission, so the authors took this opportunity to try to confirm this system. While their primary goal was to confirm the smallest planet, their techniques were applicable to all 3 planet candidates. A successful confirmation would lead to the confirmation of all three planets.

Confirming a small system
Since the KOI-245 planets are too small to be easily confirmed by other methods, a statistical analysis is applied to confirm the planets. There are several phenomena which could mimic a transit signal. Since Kepler‘s pixels have an area of 16 square arcseconds, there can be multiple objects on one pixel. It is possible that the observed signal could be a background, faint eclipsing binary star system. The deep eclipses would then be blended with the constant light of the bright target star, mimicking a planet transit. To rule out this possibility, the authors analyzed the flux from the star both when the potential planets were transiting and when they were not. If one of these signals was a binary star at a different location, then the average position of the starlight on the detector would change slightly when the binary was eclipsing. This was not observed, making the eclipsing binary scenario unlikely.

Moreover, the authors obtained high-resolution adaptive optics images of the system and found no evidence for background companions. Even a single companion would “dilute” the transit signals across the main star, meaning the transits are caused by larger planets than actually observed. The lack of a bright, background companion suggests these planets, if real, are truly caused by very small planets.

We already mentioned that radial velocity observations could not detect these planets easily. However, if these planets were much larger than expected from the signal, or if one of these signals was caused by a binary star, then RVs would easily detect the planets. In this case, an RV non-detection is significant, as this suggests the planets truly are small. The authors used HIRES, a spectrograph on one of the Keck 10-meter telescopes, to collect a series of RV observations over three summers (shown below). These observations rule out any signals larger than 7 m/s and eliminating the possibility that this star is orbited by planets significantly larger than Earth. Moreover, the authors analyzed the spectra collected for their RV studies and found evidence for only one star. If there is a second star in the system, it must have the same spectral type as the main star (so that the same spectral lines are present) and the same radial velocity (so the lines are at the same positions).

Radial velocity observations for Kepler-37. There is no considerable variation in the RVs, suggesting the planets, if real, are small. A binary star “false positive” is also ruled out.

With all of these considerations, the authors determine the only reasonable false positive would be if one or more of the planets orbited a star of the same spectral type and radial velocity as the primary star, but slightly fainter and in a location such that the star was missed by adaptive optics imaging (such as directly behind the main star). The authors compare the probability such a scenario can happen to the probability of having a planet, based on reasonable assumptions about the distribution of stars across the galaxy and the occurrence of small planets. This is hard, as Mercury-sized planets have not been studied as a population. However, there is strong evidence that small planets are much more common than large planets. With this in mind, the authors determine the background binary situation is 1,000,000 times less likely than the planet scenario, and declare three planets confirmed, giving the system (another!) name: Kepler-37.

The Takeaway
Recent Kepler team analysis has focused on the study of small planets, which are the hardest to confirm through RV observations or transit timing measurements. As more of these systems are analyzed, confirmation will likely only be achieved through probabilistic arguments, ruling out potential false positive scenarios. This method allows for confirmation of planets smaller than Mercury, such as the smallest planet orbiting Kepler-37. As this planet could only be detected around the brightest, most stable Kepler stars, it is possible this object will be the planet with the smallest measured radius (including the ones in our solar system!) known for quite some time.