This paper describes the detection of transits for a planet previously identified via radial velocities (RVs). Measuring the properties of the planet with both the transit and  RV method allows the authors to determine the density, which suggests it should have a lot of volatiles (e.g. H2O, CO2, etc). This discovery is particularly exciting because the planet orbits a bright, nearby star: ideal for follow-up observations to characterize its atmosphere!

Detective Work: The Discovery of the Transit

HD976658b (henceforth, HD976) was first discovered in 2011 by the radial velocity (RV) technique. This technique yielded a minimum mass estimate which placed this world in the super-Earth regime: more massive than the Earth, but not overwhelmingly so. Immediately, astronomers began to search this system for transits. An early detection was reported in 2011, but was shown to be spurious by another group in 2012.

Both groups initiated observation programs to follow up on the transit possibility. Neither group detected a transit where they thought it would be, based on the 2011 claim. But, the authors of this paper detected an intriguing dip on the very edge of their data. Could this be the transit?

By the time the authors found this dip, the instrument they were using, the Canadian space telescope MOST, was out of alignment to view this system. The authors had to wait until 2013 to reobserve this object. But when they did, voila! A clear transit signal  was observed – and one which suggested an even smaller planet than before!

One of the most exciting things about exoplanets is the “Captain Kirk” moment: when you realize you know enough about an exoplanet to start imagining what it’s like down there! It’s the closest thing to Star Trek we’ll find in our lifetimes.

In the case of HD976, we are blessed with a rare wealth of information. Most super-Earths, in particular the massive haul detected by Kepler, orbit stars that are too dim for the precision RV work required to ferret out their masses. By contrast, HD976 orbits a nearby, bright (V=7.7) star. The RV signal is clear and strong. In conjunction with the transit, the authors are able to use it to determine that the planet has a radius of 2.3 +/- 0.2 Earth radii, and a mass of  7.9 +/- 0.7 Earth masses, which corresponds to a density of roughly 3.5 grams/cubic centimeter. This density means the planet cannot be comprised purely of rock. It must either have a rocky core surrounded by an envelope of gas, or be something like a water world (Figure 1). A quick back of the envelope calculation suggests a surface gravity of 1.5 times Earth normal. Doesn’t seem bad for a visit! 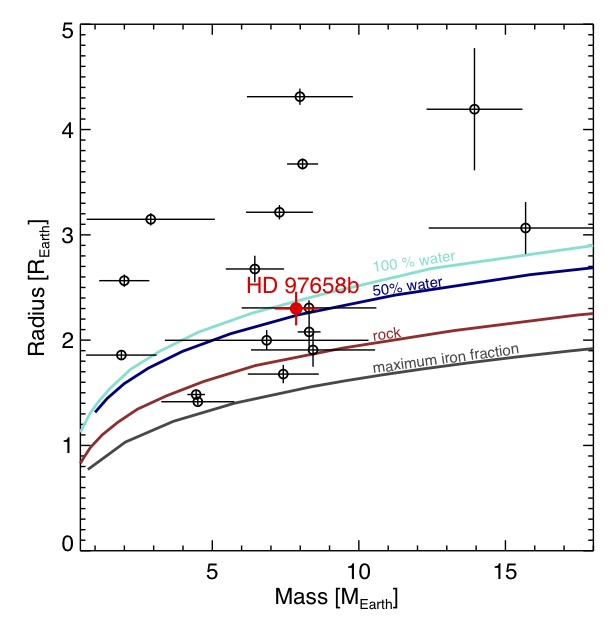 Figure 1: Mass-radius diagram for known super-Earths, with HD976 shown in red. Also shown are mass-radius curves for different planetary composition, including 100% water, 50% water/rock+iron, pure rock, and iron/rock planets. The density of HD976 places it squarely in the volatile-rich regime.

Unfortunately, the high surface temperature (1030K in the worst case) means that Bones and Spock aren’t going to be wandering over anytime soon (though perhaps Lt. Whatshisface might). But on the other hand, the characteristics of this system are highly favorable for the kind of remote exploration we can do in this century. The brightness of the parent star makes the atmosphere of the planet amenable to composition studies via techniques such as transmission spectroscopy. The surface temperature might be hot for us, but on the other hand it’s cool enough that the planet is likely to have retained some of the volatiles in its atmosphere. This means it may have an extended envelope, which would also make it amenable to transmission spectroscopy studies! The authors note that HD976 is an ideal candidate for studies with the James Webb Space Telescope, when it is (eventually) launched. The prospects are rich for learning more about super-Earths!