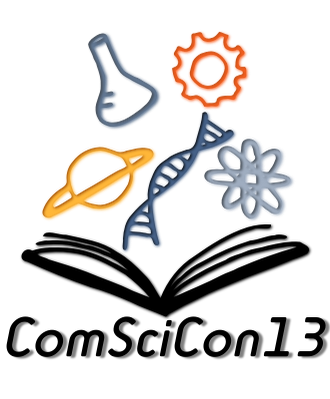 This Thursday and Friday, 50 graduate students from across the country and in various scientific fields are gathering in Boston to to attend the Communicating Science Workshop. A number of Astrobites authors will be in attendance and some helped put this workshop together. We will be listening to panels from various experts, learning and discussing amongst ourselves, and working to improve our writing skills. As we have done for previous AAS meetings, we will be live blogging about our experiences and sharing what we learn. So make sure to check back here throughout the day as we will update this page to avoid inundating your RSS feeds.

Check out #comscicon on Twitter or our Storify if you want up to the second updates on what is being discussed. We will be posting longer updates here.

Emily Lakdawalla, Planetary Society blogger extraordinaire, offered a unique view on how to communicate the depressing side of scientific research, like disheartening climate change studies or null results. The scientist becomes a tragic hero, doing noble work. Their story is engaging, for the same reasons as we watch movies like The Empire Strikes Back.

Freelance journalist Courtney Humphries had terrific advice for scientists concerned that the uncertain or equivocal nature of their results may not be communicated when writing to a general audience. To get this across, you need to make uncertainty part of the story. Differing or surprising results can be interesting and may deserve a starring role in your piece.

Christine Pulliam, public affairs coordinator at the Harvard Smithsonian Center for Astrophysics, reminds us not to forget about the big picture. Never forget to give your audience the context for new research – it helps to explain why they should care.

Session 2: Science Writing for a Cause

Michael Lemonick, senior writer at Climate Central, talked about how he writes articles without becoming an advocate for a cause. His goal is to pass on the science, not tell people what to do. Learning about what is going on in science and explaining that to others is what motivates him. He wants to know why and how scientists do research.

Amanda Martinez, a freelance journalist, addressed how to write for a general audience while not becoming an advocate. She tells us the best articles are those that respect the reader and let them draw the conclusion. Personal stories and through narrative are a great way to appeal to people.

Joe Roman, a conservation biologist and writer at the Gund Institute, spoke about his experience starting Eat The Invaders. He saw people taking action on invasive species and decided to start writing and educating others about this issue, with a mind towards eating them.  “Good scientists are often good storytellers.”

Or, is science fiction? Just kidding! Science is real.

We return after a delicious lunch for a discussion of the relationship between science and literature. Alan Brody, playwright and professor of theater at MIT, points out that science is as much fodder for drama as any other human endeavor. He writes plays about science, but his goal is not to communicate science. But appreciating why scientists are so passionate about equations and ideas requires understanding something about science. (Except  the drama surrounding atomic bombs—that’s quite accessible.) One interesting quote (rough paraphrase): “The theater, from its inception, has been about religion. Science is the religion of the 21st century… Science is becoming the background of our understanding of the world.” Perhaps this is a refreshing message: scientists don’t always have to force their ideas and methodologies on non-specialists. People find us interesting!

Joe Haldeman, science fiction Grand Master and professor at MIT, explained that science fiction started as a purely commercial enterprise. Soon, people used SciFi as a vessel for their utopian hopes. It would train people to become scientists and engineers, helping us enter a modern age of tolerance and perpetual advancement. He pointed out that SciFi takes a shotgun approach to the future; it predicts everything, and some things emerge in reality. As one of the first non-Hollywood writers to contribute to Star Trek, he pointed out that “inebriated writers” made up “science” on the fly.

Alack, these authors said they didn’t need to hire eager grad students as consultants; they get their own degrees (oh snap). They also gave the straightforward advice for scientists who might want to try their hand at writing: read everything and start writing (and don’t be discouraged by failure).

Fiction and film does influence the public’s perception of scientists. Unfortunately, Hollywood often portrays scientists as rigid and hostile towards spirituality and “soft feelings.”

Before each session, groups of attendees are giving minute-long talks. Here’s the prompt: Imagine you’re in an elevator with your scientific hero. Give him/her a short pitch about yourself and your research. The audience has two signs, an orange one labeled “jargon” and a green one labeled “awesome”, and we’re quite enthusiastic about waving them as appropriate. Jargon, briefly defined, is a word that is loaded with meaning to specialized audiences, but vague and confusing to most people.

Personally, I, your faceless live-blogger, discovered that I really need to improve my “elevator pitch.” My passion runs deep, but explaining it quickly is not so easy. I used a phrase whose meaning I thought was obvious and was greeted by a sea of orange “jargon” slides. Must get better.

2. Decide what you’re trying to say before you start preparing any text, slides, video, or interactives

3. Turn your work into a compelling story

4. Less is more, especially in presentations

7. Handouts are often an interesting option in live presentations [Ed. note: we all got handouts]

8. Visualization and good graphics are critical for colleagues, not just for “the public”

9. Don’t be afraid to break the mold

10. Give credit where credit is due, especially when you’re around jealous scientists!

Bethany Halford is a senior editor of Chemical & Engineering News, the weekly magazine of the American Chemical Society. She described her path through the wild world of science journalism, which basically started when she won an AAAS Mass Media Fellowship. As she said, “telling a source you have a PhD is like saying ‘hello’ in a foreign language when ‘hello’ is the only word you know in that language.” This dovetails with the sentiment of most panelists, who say that you should pretend to not know anything to get scientists to explain things without jargon.

Thalia Rubio, a lecturer in the MIT Writing and Communication Center, agrees that communicating with scientists isn’t much different than communicating with the public. She described an exercise that she gives her students at MIT: give directions to MIT from Logan Airport. What happens if someone hasn’t been to Boston before? Doesn’t understand trains? Doesn’t speak English? You need to question everything you’re writing to see if you’re making unhelpful assumptions.

Attendees had lots of practical questions for the panelists. For instance, is it acceptable to write/speak in a casual tone? (Yes, as long as we don’t wallow in casual utterances like “like”.) How do we make a mathematical paper flow better? (Perhaps regulate detailed methods and derivations to appendices, like in Nature papers. Or, write intensely mathematical papers, but also more readable papers that reference those papers.) How do we convince other scientists, like our advisers, that our ability to communicate clearly doesn’t mean that we’re bad at science? (Do good science.) What’s the appropriate level of a scientific talk? (Usually, pitched to an intelligent first-year graduate student.) What do we do if we’re talking to an audience that doesn’t feature English as a common first language? (Maybe violate a usual rule of PowerPoint and write most of your key points as text on your slides.)

Session 5: Interacting with the Media

Daniel Grossman shared about his career as a print journalist and radio and web producer. He issued caution about the mismatch of expectations scientists have and what journalism does. Journalists do not have room to cite entire collaborations. He acknowledged that journalists are sometimes not enthusiastically welcomed to scientific sites, but assisting them is important because our research is publicly funded. Lastly, there is a difference between scientific articles and journalism. For example, articles will not include the personal side of a story, but journalism will because it helps bring alive the story.

Richard Eckel, Senior Director of Communications at Microsoft, focused on the word why. “Why are you going to sit down with a journalist? What is your objective.” Scientists must know this goal, plan, and prepare before they begin an interview with a journalist. In his experience, scientists never spend enough time talking about the why. Journalists need this why to understand the context and broader picture of the research they are writing about. A journalist will be interested in how a scientist got interested in their field. As we have heard multiple times today, that helps provide the story.

Rick Fienberg is the Press Officer at the AAS. He shared his story as a graduate student learning how much he enjoyed writing and teaching. He then went on to Sky and Telescope before getting his current position. Rick informed us that the number of science journalist has decreased dramatically in the past few years. He espoused the need for both journalists and scientists to be ethical and honest. Criteria such as timing, relevence, proximity, conflict, or aesthetics all affect the chance of a particular result being covered by the media. When working with reporters, Rick encouraged us to start with the big picture. That will catch the most attention.

Day 1 is ending with a write-a-thon. All attendees are writing a piece about the topic of their choosing. Tomorrow, we will workshop these pieces amongst each other and then with our expert panelists. Lots of snacks are available to keep us all going through the evening.

KICP Workshop on Outreach and Education