Let’s talk about the end of the world. We face myriad threats from outer space, but our imminent doom might be of our own making. In particular, our continued use of fossil fuels is increasing the concentration of carbon dioxide (CO2) and other greenhouse gases in Earth’s atmosphere. Virtually all scientists agree that rising levels of greenhouse gases may dramatically change Earth’s climate, likely hurting many people.

In this paper, Ramirez et al. consider the extreme possibility that high CO2 levels could increase surface temperatures enough to entirely evaporate Earth’s oceans, killing us all. This sounds crazy, but something similar probably happened to Venus long ago. They simulate the response of Earth’s atmosphere to CO2 levels many times larger than the present value. Fortunately, they discover that Earth’s oceans are not susceptible to catastrophic changes.

An overabundance of greenhouse gases can cause many bad things. In general, adding greenhouse gases yields higher surface temperatures. Above a critical value (~647 K for modern Earth), all oceans will evaporate. This is the “runaway greenhouse.” Once evaporated, ultraviolet radiation from the Sun can split water molecules in the stratosphere into oxygen and hydrogen (the fancy word for this is “photodissociation“). The hydrogen would escape to space relatively quickly.

Photodissociation of water and subsequent escape of hydrogen can occur even if Earth’s oceans aren’t completely evaporated. All that’s required is a large concentration of water in the stratosphere. This is a “moist greenhouse.” The critical temperature for a moist greenhouse (~340 K for an Earth-like atmosphere) is lower than for a runaway greenhouse.

Ramirez et al. also discuss a bonus catastrophe. Solar radiation is increasing by ~1% every hundred million years, which will cause a gradual increase in surface temperatures, all else being equal. The “weathering reactions” that pull CO2 out of the atmosphere and sequester it in carbonate rocks run faster at higher temperatures. So, atmospheric CO2 concentrations might eventually drop below what plants need for photosynthesis. Compared to the loss of Earth’s oceans, however, this seems like a small problem!

Figure 1: Photo of the surface of Venus from Venera 13. The surface temperature is hot enough to melt lead. Is this what Earth will look like if we don’t stop burning fossil fuels? (Probably not.) Image credit: NSSDC Photo Gallery, NASA/GSFC.

The climate model used for this paper is almost thirty years old, although it has been substantially augmented through the years. It calculates the atmospheric temperature and heat transfer for one hundred atmospheric layers in one-dimension. The authors parameterize the absorption of radiation by a plethora of molecules (including ozone, oxygen, water, carbon dioxide, and methane) in solar and infrared wavebands, using the latest experimental data. 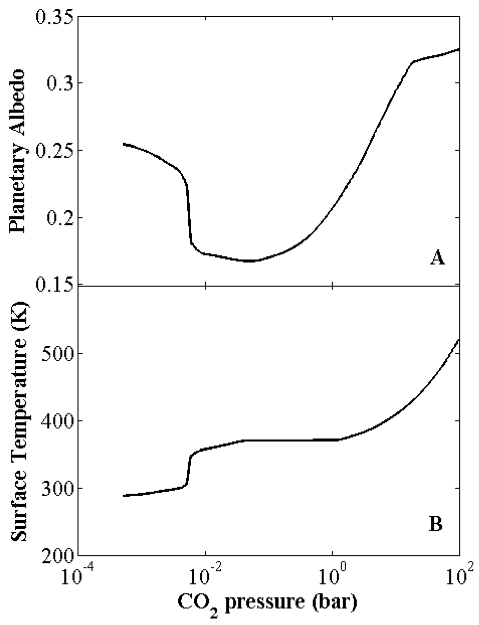 The main innovation in this paper is a new formulation for how the relative humidity of the atmosphere changes as a function of surface temperature. In particular, a successful formula must explain why the troposphere of present-day Earth is not fully saturated, whereas a runaway greenhouse on Venus requires that the Venusian atmosphere be nearly fully saturated. That is, relative humidity must increase with surface temperature.

The authors acknowledge the effects of clouds and the accuracy of their parameterization of relative humidity as potentially large sources of error. Some complicated 3-D simulations simulate these phenomena in detail; the authors benchmark their models for a few special cases and argue that their 1-D model yields reasonable qualitative conclusions.

Figure 2 shows the effective albedo of Earth (panel A) and the associated surface temperature (panel B) for a wide range of atmospheric CO2 pressure. (Albedo is the fraction of solar radiation that Earth reflects.) Most importantly, the critical temperature for a runaway greenhouse is not reached in any simulations. Worryingly, the critical temperature for a moist greenhouse is exceeded for CO2 concentrations ~11 times higher than present values. Because of the complicating effects mentioned above, however, the amount of CO2 required to trigger a moist greenhouse on Earth is likely much larger in reality.

So, Earth’s oceans are probably safe for now. But these simulations illustrate the fragility of the atmospheres of terrestrial planets. If we received more radiation from the Sun or if we had significantly more greenhouse gases, we would be in serious trouble. When studying Earth-like planets orbiting distant stars, we must never take habitability for granted.