Earth-That-Was could no longer sustain our numbers, we were so many.

We found a new solar system: dozens of planets and hundreds of moons. Each one terraformed — a process taking decades — to support human life.

In Joss Whedon’s seminal television show, Firefly, overpopulation and ecological collapse has forced humanity to abandon Earth for a new solar system, comprising dozens of planets and hundreds of moons. While I loved the show, this part of it always struck me as unrealistic. I mean really, what are the odds that a single stellar system could host so many habitable planets?

Turns out, better than I thought. This paper reports that the M-dwarf star GJ667C is orbited by a system of six, maybe seven super-Earths, of which three are in the habitable zone. This is an extraordinarily closely packed system of planets, straight from science fiction! Perhaps the ‘Verse isn’t as unlikely as I thought it was.

GJ667C is an M-dwarf member of a triple star system. The GJ667 system is hierarchical; this means  that GJ667A and B orbit relatively close to each other, while GJ667C orbits the common center of mass ~230 AU from the others. As an M-dwarf, GJ667C is much cooler, smaller, and less luminous star than the sun. As covered in previous astrobites,  M-dwarfs pose many advantages for planet-hunters relative to Sunlike stars. Among these advantages are their much lower masses, which means that the same-sized planet causes a much larger and hence more detectable radial velocity wobble when orbiting an M-dwarf than when orbiting a Sunlike star.

Planet hunters studying GJ667C exploited this advantage to discover two planets orbiting this star via the radial velocity (RV) method, with a strong hint of a third. The authors of the present paper have gone further. They have agglomerated hundreds of RV observations of this system using the premier HARPS spectrograph at La Silla, the HIRES spectrograph on Keck, and the PSF spectrometer on Magellan. They analyzed these data using a sophisticated Bayesian analysis. This analysis distinguished itself from previous work by being much better at being able to deal with the effects of having many planetary signals in the data. When they pass these data through their pipeline, they clearly identify six planetary candidates, and see a suggestion of a seventh (Figure 1). 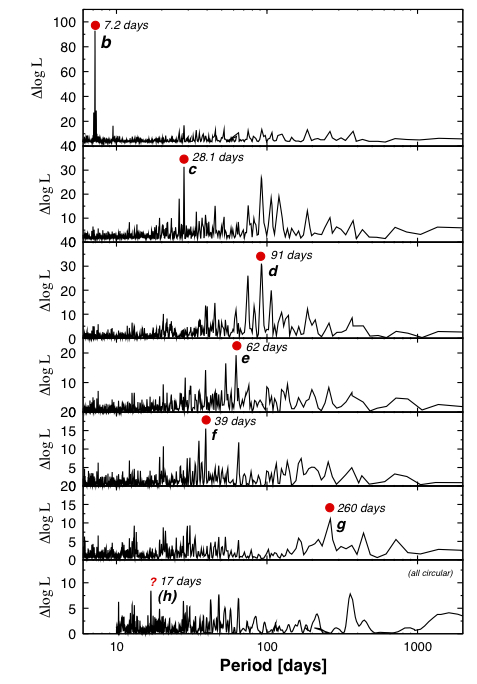 Figure 1: Log-Likelihood plot of the planetary signals observed in the GJ667C system; higher peaks indicate a greater likelihood that the signal is of planetary origin (as opposed to stellar or instrumental effects). Six planets are clearly observed, while a seventh (h) is suggested.

One possible false positive for this kind of signal is stellar activity: processes on the star (e.g. starspots) might mimic an RV signature. The authors demonstrate that these signals are not due to stellar activity. Another important reality check on this system is a stability analysis. The planets are packed relatively close together, meaning their gravitational interactions are relatively strong. Does there exist an orbital configuration of these planets in which they do not destabilize each other’s orbits? The authors find there exist stable orbital configurations. This is sufficient to elevate them to the status of planet candidates.

Figure 2 presents a schematic illustration of the GJ667C planetary system. The planets are packed remarkably close together. Excitingly, three of them – c, f, and e – lie within the habitable zone! This means they receive a level of stellar irradiation that is compatible with liquid surface water, assuming the right kind of atmosphere. The edges of the habitable zone correspond to a runaway greenhouse effect (inner edge) and the maximal greenhouse effect (outer edge, past this CO2 cannot trap enough heat to keep water liquid).

Figure 2: Schematic of the GJ667C planetary system. c, f, and e all lie within the habitable zone; h and d are close (potentially terraformable?) The detection of h is tentative.

It’s an open question whether these planets are rocky worlds with a thin atmosphere, like Earth, or mostly gaseous, like Neptune. We don’t have transit measurements of the planets’ size, so we can’t determine their densities, which might let us constrain their composition. However, we do know that these worlds can’t have formed from material at their current locations: there simply wasn’t enough stuff in the initial nebula at those distances to form all those planets. They must have either formed further out and migrated in, or been enriched by flows of ices and dust from further out. This suggests that rocky or gaseous, they are volatile-rich. If rocky, they are likely to harbor a great deal of water.

Planets orbiting close to their stars are vulnerable to a number of effects. The authors show that GJ667C is inactive: it doesn’t have many stellar flares, spots, or other stellar activity. This means the planets are unlikely to be sterilized by stellar events. Additionally, at such proximity to the host star, tidal heating of the planets is a concern. The authors show that tidal dissipation does not input enough energy to the planets to render them uninhabitable. If they are rocky, these putative planets may be good candidates to host life!

Here, it’s kind of awesome to take a step back and speculate. Imagine what it would be like to evolve in a solar system with multiple habitable planets in close proximity. Astronomers would gaze to the heavens and see clear evidence of habitable (inhabited?) planets: The fantasies of Lowell would be no fantasies. Interplanetary travel would be clearly motivated and readily achievable. Inhabitants of such a system would have strong incentives to take to the stars. Who knows? Perhaps even now, alien astronomers look to the sky. An actively spacefaring species, it’s a natural step for them to build their own version of the Terrestrial Planet Finder and search the stars in their neighborhood for habitable worlds. Perhaps even now a team there rushes a paper to publication, claiming detection of a habitable planet: a dwarf planet, just next door in astronomical terms, the third world orbiting a yellow G-type star.