This article uses theoretical modeling to estimate the influence of ice and snow on the habitability of extrasolar planets. This work differentiates itself from past efforts by including the influence of the atmosphere, and by considering planets orbiting M-dwarfs in addition to Sun-like stars.

Many studies of exoplanets are concerned with habitability. Astronomers seek to understand whether a newly discovered planet is an amenable environment for life and hence a good place to search for it.

A central concept in such studies is the notion of the liquid water belt, today known as the “habitable zone” courtesy Carl Sagan. The premise is that for the emergence of life as we know it, a planet must host liquid water. This means the planet cannot be so close to the star that all the water boils away, nor can it be so far from the star that the water all freezes out as ice.

The ice-albedo feedback loop refers to a runaway cooling process that can happen on terrestrial planets. The underlying concept is that ice and snow reflect much more light (have much higher albedo) than liquid water oceans. If a planet cools, then more ice and snow form, reflecting more light and cooling the planet even further, resulting in more ice and snow forming. This process can “run away”, terminating only when the whole planet is covered by ice. There is evidence suggesting this has happened several times in Earth’s history, resulting in “Snowball Earth”. (It may also be what happened to the ice planet Hoth from Star Wars)

In this paper, the authors sought to explore the influence of the ice-albedo effect on different kinds of planet via theoretical modeling. They varied the density and composition of the atmosphere enveloping the planet, as well as the star the planet orbited. They looked at a G-type star (such as the Sun) and compared it to an M-dwarf. The comparison with M-dwarfs is particularly important because recent work suggests terrestrial planets are common around them. The key difference between M-dwarfs and Sun-like stars is that M-dwarfs are much cooler, meaning that most of their radiation is emitted in the infrared (Figure 1). This is important in the context of this work because the albedos of ice and snow decrease strongly with increasing wavelength (Figure 2). On the other hand, the albedo of liquid water does not change as much with wavelength, meaning that in the infrared the albedos of ice and snow become similar to that of water. This makes the ice-albedo loop much less powerful in these cooler M-dwarf stars. Since the danger of a runaway snowball occurring is reduced, this means that a planet can be habitable with less received radiation when orbiting an M-dwarf compared to a Sun-like star. 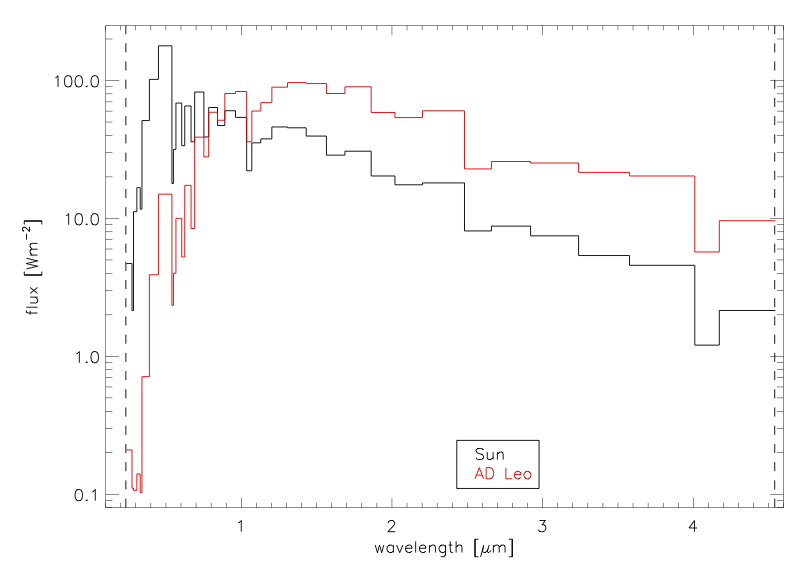 Figure 1: Spectra of the Sun (black) and AD Leo (M-dwarf, red). M-dwarves put out most of their energy in the infrared. 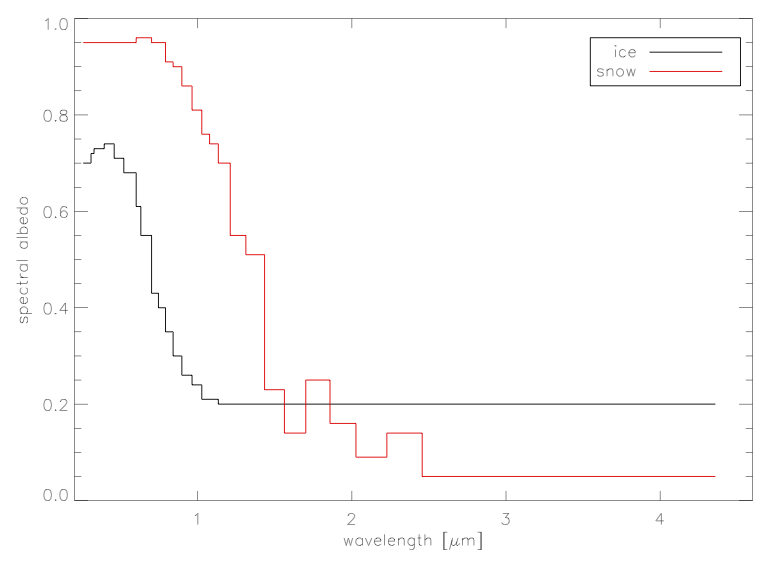 Figure 2: Wavelength dependence of albedo for ice (black) and snow (red). The albedo of these substances declines with wavelength, meaning that the albedo contrast with water – and hence the ice-albedo effect – is muted at longer wavelengths. The flatness of the curves is due to a lack of data longward of those wavelengths.

This is not the first study comparing the effects of the ice-albedo loop as a function of planetary host star. However, these authors expand on previous work by adding the influence of an atmosphere of varying composition. They found the following:

All in all, it’s a good thing Hoth didn’t orbit an M-dwarf; had it done so, it would have been much harder to sustain the ice planet phase. Although it might have been more habitable for life due to the presence of liquid water, it would have been harder for the Rebels to build a secret base there