The Habitability of Exomoons

Kepler has been looking for planets in the habitable zones of their stars, where temperatures are such that liquid water could exist on the planets’ surface. But moons could be habitable, too! Kepler hasn’t detected an exomoon yet, but they’re looking. Determining the habitable zone boundaries for an exomoon is more complicated than for a planet. A moon receives flux from the star plus reflected starlight and thermal emission from the host planet. Since the flux depends on distance, and both the orbits of the moon around the planet and the planet around the star change the distance from the moon to the star, the flux received will vary as all these orbits progress.

The authors of this paper used a model to calculate the stellar flux and planetary flux (from reflected starlight and thermal emission) incident on an exomoon. If the planet is on a circular orbit, the total flux on the moon simply varies  periodically as the moon orbits the planet. However, if the planet has a large eccentricity, the total flux on the moon shows a longer-period variation as the planet moves closer to and farther from the star (see Fig. 1). The stellar flux dominates over the flux from the planet. 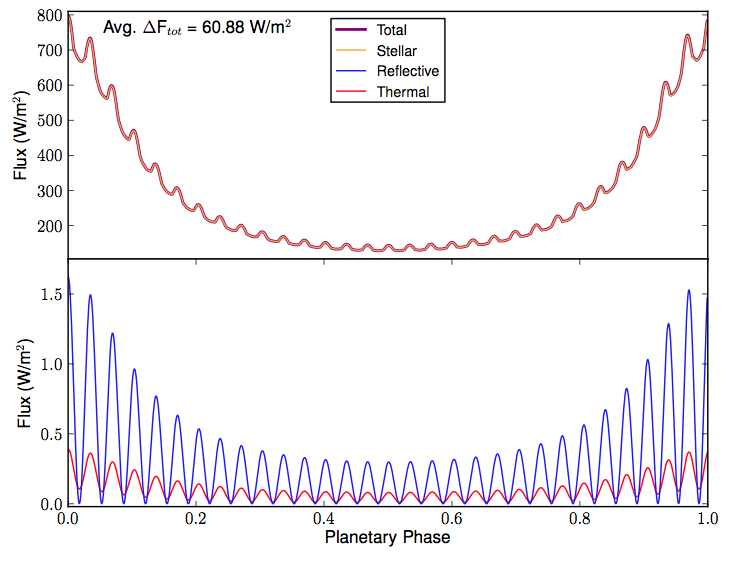 Flux vs. planetary orbital phase for a model moon around a 1 Jupiter-mass planet orbiting a 1 Solar-mass star at 1 AU with eccentricity 0.4. The flux from the star (yellow) is so dominant that it is nearly equal to the total flux (purple). These two lines are in the top panel and overlap so much that they appear as one reddish line. The flux from reflected starlight (blue) and thermal emission (red) from the planet, shown in the bottom panel, are much smaller.

The authors studied four systems with known exoplanets in the habitable zones of their stars. Fig (2) shows the planetary orbits and habitable zones for each system. The authors placed a hypothetical exomoon around each habitable-zone planet and used their flux model to calculate how the flux on the exomoon varies with time. When placing a moon around a planet, the authors wanted to put the moon as far from its planet as possible (to increase the variation in distance to the star) while keeping the planet-moon system stable. They considered two limiting radii. The Hill radius is the maximum radius at which the moon is gravitationally bound to its host planet. Outside this radius, the gravitational pull of the star dominates the gravitational pull of the planet. The tidal locking radius is the maximum radius at which the moon is tidally locked, i.e., the moon completes one revolution in the same time it completes one orbit around the planet, so one face of the moon is always pointed towards the planet. Our moon is tidally locked with the Earth, which is why we never see the far side of the moon from Earth. A tidally locked satellite is more stable, so the authors placed each exomoon at either the Hill radius or the tidal locking radius (whichever was smaller) to ensure the stability of the planet-moon systems. 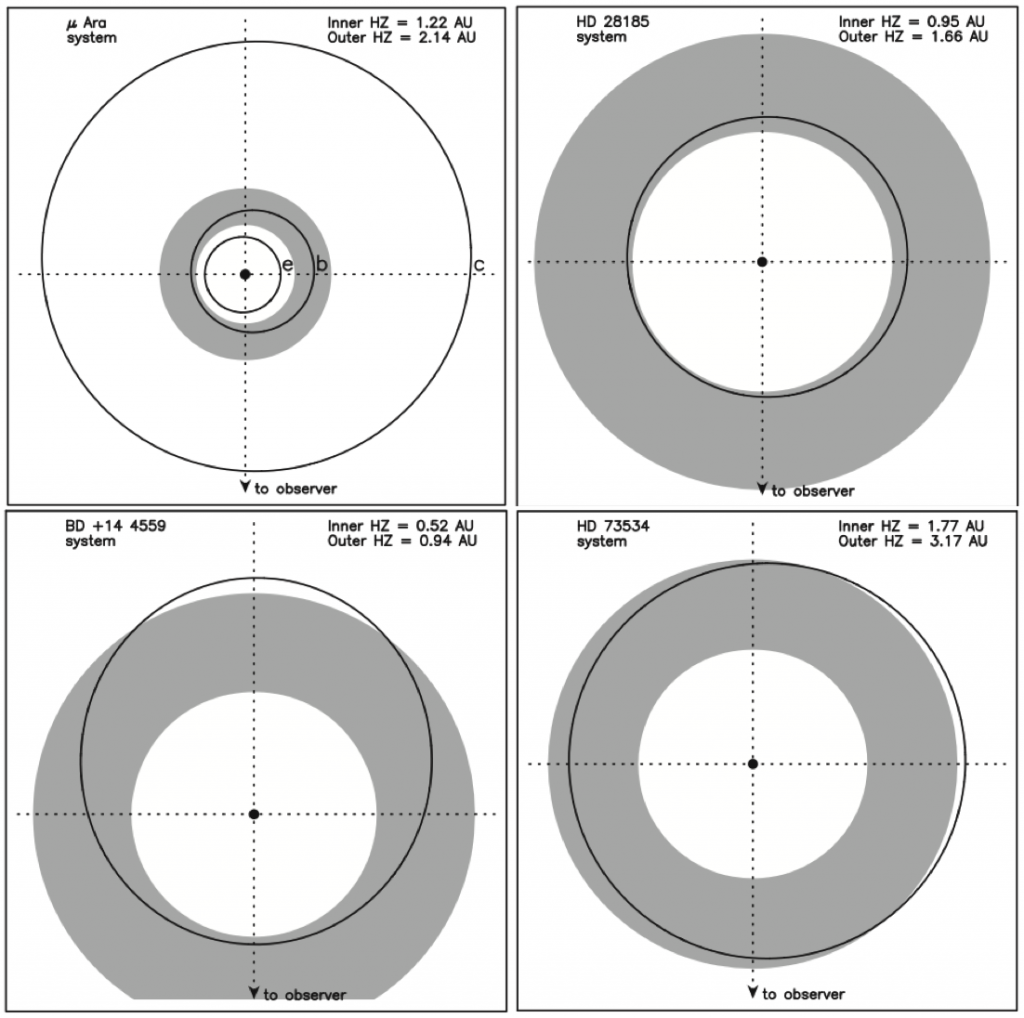 Diagrams of the four systems studied in this paper. The solid lines show the planet orbits and the shaded area represents the habitable zones.

After calculating the flux for each exomoon, the authors calculated how the surface temperature of each moon varied using a very basic atmosphere model (like in this astrobite). They discovered that if the moon’s atmosphere can redistribute heat around the moon efficiently, then even if the host planet’s orbit takes it out of the habitable zone (as in BD +14 4559 on the bottom left), the moon can keep a habitable surface temperature for the entire orbit! This result will be important to keep in mind when we begin to discover exomoons (with Kepler or some other instrument) and try to characterize their habitability.