In this Astrobite, we dive into the design and fabrication of crucial optical elements that we rarely think about beyond our eyeglasses: anti-reflection (AR) coatings, and their application to millimeter-wave telescopes such as ACTPol.

What are AR coats?

In electricity and magnetism, we learn that when light meets an interface between two materials, part of the light is reflected.  We can calculate this: knowing the indices of refraction (the speed of light in a material relative to vacuum) of both materials, the percent reflected is given by

.  For a vacuum-glass interface (indices 1 and 1.5), 4% of light is reflected and 96% is transmitted.  Of course, we want as much light as possible getting through our telescope’s lenses and filters.  AR coats can do this by introducing a material with an intermediate refractive index between the other two materials.  The smaller difference in indices reduces the reflection coefficient, meaning more light is transmitted.  The optimum AR index in this basic two-layer case is

; for the vacuum-glass example, only 2% is reflected with the addition of an optimal AR coat. 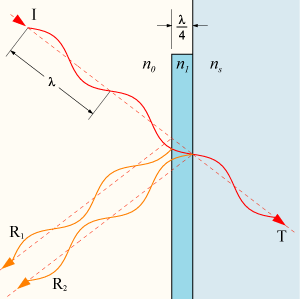 Another interesting effect occurs when we carefully tune the thickness of the AR coat (Figure 1).  When the AR layer is exactly one quarter wavelength of the incident light, the reflection from the AR-substrate and the vacuum-AR interfaces interfere and cancel.  If there are no dielectric losses in the materials, the coating is perfect and conservation of energy requires all of the light to be in the transmitted ray.

This perfect-case scenario is only true if we’re looking at light of a single wavelength and only considering light incident at 90 degrees.  Near-ideal performance can still be achieved over wide bandwidths and larger ranges of angles through multi-layer coatings, each with a slightly different refractive index.  However, another common design requirement of millimeter-wave telescopes is that the optics should be kept at cryogenic temperatures to reduce thermal loading on the detectors.  If the lens and its coating are made of different materials, they will have different coefficients of thermal expansion and in the process of cooling down they will contract at different rates, potentially damaging the optics.  But what if we could make an AR coating out of the same material as the optical element itself? 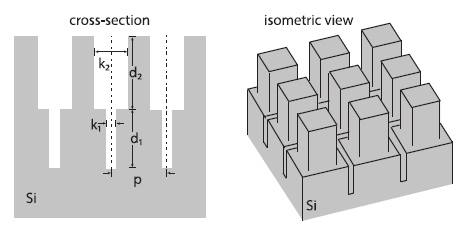 Figure 2: (top) The geometry of the two-layer AR coating, consisting of pillars and troughs cut directly into the silicon lens. (bottom) The lens and a microscopic image of the cut grooves.

ACTPol is a receiver for the Atacama Cosmology Telescope in Chile, designed to characterize CMB polarization at 150 GHz.  The reimaging optics scheme consists of three 33.4 cm silicon lenses feeding a detector array.  Why silicon?  For this optical configuration, lenses with a high index were needed for high optical quality across the field of view.  Silicon has an index of 3.4 at microwave frequencies, low dielectric loss at cryogenic temperatures, and high thermal conductivity (meaning that the whole lens will stay at the same temperature).

Instead of finding another material with the right index and matching silicon’s thermal expansion, the authors tried another approach: directly machining shapes into the surface of the silicon itself to synthesize a layer of “metamaterial.”

A layer which is partially air (or vacuum) and partially silicon can be treated as a distribution of small scatterers with an effective dielectric constant that is a function of the density of scatterers.  Essentially, changing the filling factor of silicon in a layer allows us to tune the index of refraction of that layer. As long as the structures cut into the silicon are much smaller than the wavelength of the incident light, they will appear like a smooth surface to the incoming waves. Because the telescope works in the microwave portion of the electromagnetic spectrum, the wavelengths are relatively long and complex structures can be machined on a reasonable length scale.

Figure 2 (top) shows the geometry of the cuts used in the lenses: an array of square pillars on a square grid, cut with a silicon dicing saw by making two sets of parallel trenches rotated 90 degrees relative to each other.  Numerical simulations determined the optimal spacing and depths of the trenches at the expected input frequencies and incidence angles.  Since commercial silicon dicing machines are not designed for curved surfaces and the large diameters necessary for the ACTPol lenses, the authors built a custom system.  With this scheme, it takes 6 8-hour days to fabricate one lens. 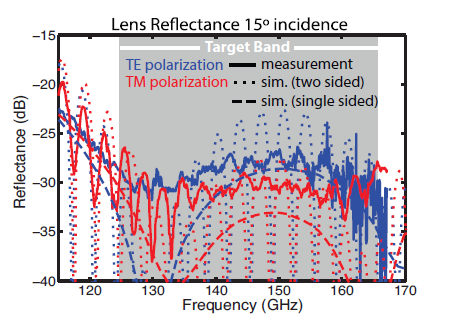 Figure 3: Reflection performance of the silicon AR coat. Red and blue are for different polarizations.  -30 dB means that 1/1000th of the incident light is reflected.

Figure 2 (bottom) shows the front surface of the lens with 500,000 posts machined, and a microscopic view of the cuts in the silicon. Warps in the grooves are due to imperfections in the lens mounting plate that stress the lens.  In Figure 3 we see the measured reflectance results for two polarization states (TE and TM), compared to the predicted values for a single AR coated surface and two flat surfaces separated by the central lens thickness.  The upshot is that across the band of interest (125-165 GHz) and expected incidence angles, reflection is reduced to a few tenths of a percent.

This work shows that it is possible to fabricate a high-performance AR coat directly on silicon lenses, bypassing the thermal contraction problem.  As more large-aperture microwave telescopes are built, these techniques will become crucial for achieving the highest optical throughput possible, translating directly into better sensitivity and more accurate maps of the sky.