Compared to our Milky Way, dwarf irregular galaxies have led a much quieter life. As a result they are smaller (though that can still mean weighing up to a billion solar masses!), and their gas is not greatly enriched with elements heaver than helium, reflective of the fact that they have undergone relatively little star formation compared to their larger counterparts.

They also represent an important evolutionary link to present day galaxies like our own. Our current best theory of how structure formed in the universe (Lambda-CDM) says that larger galaxies are built up and fueled by mergers with smaller galaxies (like dwarfs). So, by understanding the stellar populations and history of dwarf galaxies, we are actually learning what the building blocks of galaxies like our own are made of (as they say, you are what you eat). 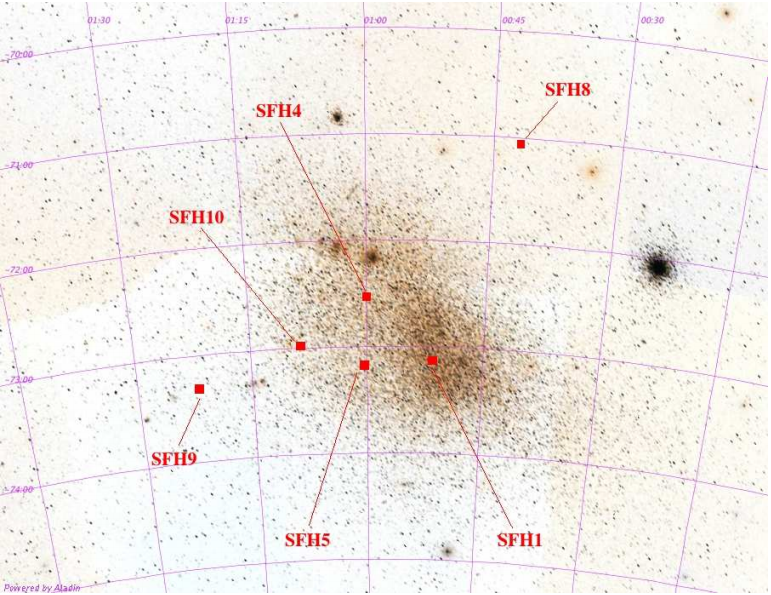 An image of the Small Magellanic cloud from the Digital Sky Survey (DSS). Superimposed on this field in red are the locations of the six fields studied using the ACS instrument on the Hubble Space Telescope. Results from six of these fields (5,8,9 and 10) are presented in this paper. To the upper right of the SMC in this image is the foreground globular cluster 47 Tuc. This figure is taken from Figure 1 of Cignioni et al.

This paper is part of a series investigating the star formation history of the Small Magellanic Cloud (or SMC), the nearest example of a dwarf irregular galaxy, and a satellite of our Milky Way.  It has very low metallicity (only about 0.4% of the gas in this galaxy is made up of elements other than Hydrogen and Helium, compared to 2% for our Sun), and is rather massive for its type (for more on this galaxy, see this astrobite), possibly due to a merger in its past. Right now of course it is being disrupted by interactions with the Milky Way as well as the Large Magellanic cloud (another nearby dwarf galaxy). However, before all of this harassment started, the SMC may previously have had a more organized (spiral?) structure, and it still shows evidence of a bar.

This paper presents deep photometry of the SMC from the Hubble Space Telescope, from which the authors construct and analyze color-magnitude diagrams of the individual stars in four regions of the SMC (called Fields 5, 8, 9, and 10). Where stars lie on this diagram gives information on their age, mass, and metallicity, which is used to infer the star formation history of that region of the galaxy (see this astrobite for more details). So, what secrets are the authors able to dig up about the SMC’s past? 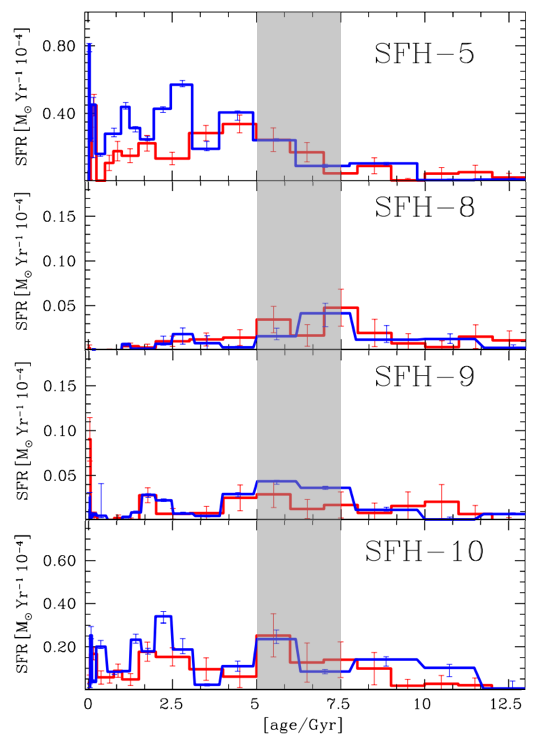 The star formation rate derived for each field in the SMC as a function of time, using two different procedures which are described in the paper: Bologna (red) and Cole (blue). The shaded region represents the time from 5-7.5 Gyrs ago, when all fields show a factor of 2-3 increase in the star formation rate, compared to earlier times. Figure adapted from Figures 3, 7, 9, and 11 of Cignioni et al.

One surprising thing that the authors find in common between all of the fields observed is an increase in the star formation rate in the SMC between 5-7 Gyrs ago. This is surprising, because current models suggest that the SMC was relatively isolated at this time, and was not experiencing any significant dynamical interactions with the Large Magellanic Cloud or the Milky Way, which could trigger the formation of stars and clusters.

One possibility that could explain the increase in star formation at this time is a major merger with another dwarf galaxy. However, models of this merger suggest that it should result in an observable dip in the metallicity of the SMC at that time, due to infalling (and less-enriched) gas. Instead, the authors of this paper find a continuously increasing metallicity in all observed fields, with no evidence of a dip in metallicity 7 Gyrs ago. The lack of a dip suggests against a major merger at this time, but the authors state that a minor merger (accreting a much smaller dwarf galaxy) could be consistent with the enrichment history of the SMC, and could still potentially be a viable explanation for the increase in star formation between 5-7 Gyrs ago.

So, even quiet galaxies like the dwarf irregular SMC are not always as simple as they first appear. But of course, a sordid past doesn’t just affect the future of the SMC alone. By uncovering complexities in one of our Galaxy’s future meals, we continue to find out more about the diet of galaxies as a whole. Bon Appetit!