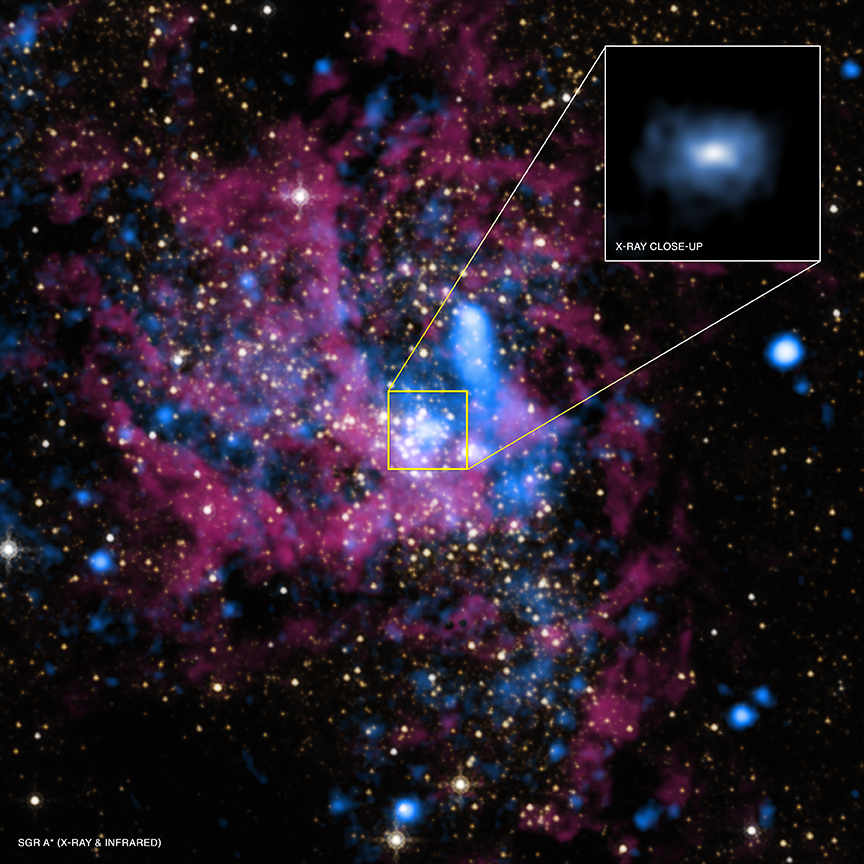 Figure 1 – A composite image of Sgr A*.  The red depicts infrared detections, while the blue is X-ray. It is much fainter in energetic X-rays than expected. Image Credit: NASA

This is one of my favorite misconceptions in astronomy.  I constantly run into people who think that black holes roam the galaxy, sucking in everything that gets in their way! While it makes for a great science fiction film, and possibly even a good xkcd comic, it couldn’t be further from the truth.

Using the Chandra X-ray telescope, a team of astronomers led by Dr. Q. D. Wang at the University of Massachusetts, have taken a much more detailed look. The punch line is that Sgr A* will only swallow cold gas, rejecting plenty of hotter gas. In the end, less than 1% of the gas available to Sgr A* actually accretes onto the black hole.

Wang et al. collected and analyzed 3 megaseconds (approximately 35 days) worth of data – making one of the longest observing campaigns ever performed with Chandra. The team used the ACIS-S (Advanced CCD Imaging Spectrometer-Spectroscopy), combined with the HETG (High-energy Transmission Grating) to reveal the X-ray emission from Sgr A*.

While the X-ray emission from Sgr A* is faint, it does appear to be substantially more extended than a point-like source, as seen in the inset in Figure 1. After removing various effects, it has an east-west elongated X-ray enhancement, roughly 1 – 1.5 arcseconds. This unique shape is expected to be a single-temperature plasma with zero metallicity and a few prominent emission lines – a finding that argued against previous results.

Former models have suggested that the X-rays are emitted from a concentration of low mass stars around the black hole, but the authors of this paper argue against that.  Their most promising line of evidence is that the emission doesn’t show significant variation on the time scale of hours or days, as expected from the sporadic coronal flares of individual stars. Instead it is a smooth single-temperature gas. The authors argue instead that the X-ray data show the hot swirling winds emitted by massive stars. Massive stars expel winds at high rates. In the dense environment at the center of our galaxy, these winds then collide and swirl at high speeds – emitting X-rays.

Figure 2 – The X-ray spectrum of Sgr A*. The left-hand plot shows a zero metallicity continuum fit with various Gaussian lines. The right-hand plot shows the fit of a model with nearly equal inflow and outflow rates.

Sgr A* feeds off the winds of these stars. Wang et al. modeled the exact inflow rate of material, which leads to accretion onto the disk. The team found that the powerful inflow of stellar gas nearly balanced the outflow – existing in a state near equilibrium. This may be seen in the right-hand plot in Figure 2. In such a state, one can easily deduce why Sgr A* naturally has such low bolometric luminosity and a lack of powerful jets.

But while approximately 50% of the gas falls onto the accretion disk and funnels toward the event horizon, Sgr A* may not necessarily capture it. Wang et al. found that Sgr A* has difficulty in actually capturing these winds because of their high temperatures. They studied the relative strengths of individual emission lines, which are powerful diagnostics of the accretion flow and plasma temperature, and came to the conclusion that most of the gas is simply too hot to swallow.

Over the course of the observing campaign, Sgr A* rejected 99% of this material – letting only a small amount of cool gas in. In order to be captured by a black hole, material must lose heat and momentum. This can be accomplished by ejecting most of the gas, carrying away energy and momentum, in order to allow a small amount to reach the black hole itself.

Exactly how Sgr A* accepts cold gas while rejecting hot gas – ejecting the matter back out into space – remains unclear. But we can now picture Sgr A* as a puny supermassive black hole, wearing a bib, and eating very little of his dinner while throwing most on the floor.