Gamma-ray bursts (GRBs) are the most energetic explosions in the Universe, even more energetic than supernovae. In this paper, the authors use one GRB as a beacon to study the properties of the galaxy where it originated and the composition of the intergalactic medium at high redshift (see also this astrobite and this one). They also study the relation between metals and dust to understand how dust forms in the Universe.

When a GRB goes off, the explosion gradually becomes less energetic and the emission can persist for several days: the ‘afterglow‘ of the burst. The light travels through the host galaxy and the intergalactic medium until it reaches our telescopes. Along the way, photons exchange energy with the intervening material, gas and dust. Signatures of these processes are present in the spectrum of the light and they enable us to decode the composition of the intervening material. The identification of metals at high redshift allows us to know more about how and when they were produced in the Universe. They also give us hints to the mechanism responsible for creating dust at these redshifts. Dust could be produced in supernovae, alongside with metals, or grown from materials in the interstellar medium (ISM). In the first case, it is expected that the amount of dust should be correlated with metallicity. In the second case, a minimum threshold of metallicity would be required to form dust, such that the ratio between metals and dust would not be constant at low metallicities.

GRB 111008A, observed by the Swift mission,  is the focus of this paper. Its redshift is z~5, which means that it went off when the Universe was 9% of its current age. By modelling the location of the absorption features in the spectrum of the afterglow, the chemical composition of intervening clouds of gas (‘absorbers’) can be explored. In particular, the ensemble of lines identified in this afterglow spectrum can be explained by the presence of two regions with high density of hydrogen, ‘damped Lyman-α systems‘ (DLAs). One of the absorbers is at the same redshift of the GRB, this is the host galaxy itself. The second absorber is an intervening cloud of gas at z~4.6, serendipitously located in the same direction. The figure below shows the region of the spectrum where absorption due to hydrogen is present. Three dips can be identified. Two of them are due to Lyman-α (the excitation of one electron in a hydrogen atom from levels n=1 to n=2) and Lyman-β (n=1 to n=3) absorption lines of the host galaxy. There is another absorption feature in this region, the Lyman-α line of a z~4.6 absorber.

A portion of the spectrum of the afterglow of GRB111008A, where Lyman-α and Lyman-β absorption from the host galaxy are visible. Lower redshift Lyman-α absorption can also be identified. The red line is a fit to the absorption features, while the gray region indicates an absorption feature due to our own planet’s atmosphere. N(HI) is the column density of hydrogen in each absorber. Figure 1 from Sparre et al. 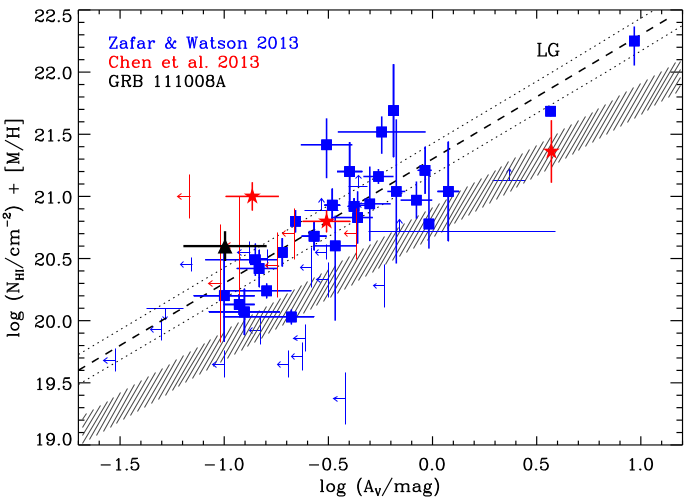 Metal content (y-axis) vs. dust extinction (x-axis) in the host galaxy in GRB111008A (black) compared to other absorbers (blue), nearby lensed galaxies (red) and Local Group galaxies (dashed). The shaded region indicates a boundary below which it is not expected to find any objects, since the mass in metals would not suffice to produce dust consistently with this ratio. Figure 5 of Sparre et al.

The authors obtain the ratio of dust-to-metals in the host galaxy by comparing the amount of metals, obtained from the metal absorption lines in the spectrum, to the extinction along the line of sight to the host galaxy (the dimming of the afterglow due to absorption by dust), obtained by modelling the spectrum.  The host galaxy has a low metallicity of ~2% the Solar value, compared to similar absorber systems at z>4.5. Assuming all the extinction is due to the host galaxy, they compare its dust-to-metals in the figure to the right to other absorbers, nearby lensed galaxies and galaxies in the Local Group (the Milky Way and its neighbours). If the dust-to-metals ratio were constant over cosmic epoch, as in the model were dust is produced in supernovae, then all absorbers should lie on the dashed line. Within the uncertainty, it is hard to distinguish whether the ratio for this GRB is below or consistent with the ratio in the Local Group. While they cannot distinguish between the two models for origin of cosmic dust at z~5 from this GRB alone, a previous paper has suggested that dust-to-metals ratios in a wide variety of absorber systems (the blue points, spanning several orders of magnitude in metallicity) are consistent with the supernovae production model.

They also study the composition of the metals observed for the DLA at z~4.6. This system exhibits high metallicity (2% to 8% of the Solar metallicity) compared to other DLAs at this redshift. This is just a lower limit, since metals can build dust grains, depleting the metal budget in the absorber. The high metallicity observed is likely associated to the hydrogen density of the absorber, which is much higher than other DLAs at that redshift. By chance, the GRB afterglow might have traversed a very high density region along the line of sight, near where stars are forming and the enrichment is enhanced.

While the question of the origin of cosmic dust remains open, GRBs are emerging as a window to studying galaxies, chemical enrichment and dust at high redshift.