Astrobites at ASA: Astronomy Down Under!

A few weeks ago the American Astronomical Society (AAS) held their annual meeting in Denver, Colorado (see our coverage of it here, here, and here), but just last week in the Southern Hemisphere the Astronomical Society of Australia (ASA) held their own annual meeting in Melbourne, Victoria. A lot of the talks this year revolved around multi-messenger astronomy (observing objects using both electromagnetic and gravitational waves), the epoch of reionization, big data and high-performance computing, and the upcoming Square Kilometre Array. It would take more than a single post to cover all the amazing and varied science presented at the conference, so I’ll just pick out one talk from each day that I found particularly interesting.

The conference began with a welcoming to the country by Wurundjeri Elder Bill Nicholson, ceremonially inviting everyone to the traditional lands of the Wurundjeri people. 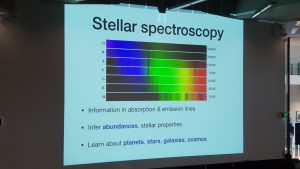 To begin the conference Anish Amarsi (Max Planck Institute for Astronomy) talked about improving our ability to decode the information present in starlight by improving our models of spectroscopy. Stellar atmospheres are incredibly complex with all kinds of features at different spatial and temporal scales. Yet for a long time our synthetic models of stellar spectra have been only one-dimensional and assume something called local thermodynamic equilibrium (LTE), which isn’t strictly true. His talk showed off some amazing new simulations of the surface of stars boiling like a pot of water which were done in three dimensions without assuming LTE. Having better models of the processes in stellar atmospheres is important for understanding many things about stars, such as the abundances of the various elements in them. Knowing the elemental abundances in stars is critical for things like galactic archaeology, so having better models will be a big aid to astronomers working in these areas.

PerSieve: understanding the role for the astronomer in the data-intensive era

On Tuesday Sarah Hegarty (Swinburne University of Technology) presented a talk which addressed a thought-provoking question: as automated telescopic surveys become more powerful, archival data sets become larger, and machine learning becomes more sophisticated, what is the role of the human astronomer in this new era of “big data?” (This talk won the “Best Student Talk” award.) The old model of astronomers taking their own observations and reducing and analyzing them on their own personal computers will become increasingly outdated in the face of automated surveys with automatic data reduction pipelines that put out terabytes of data each night. And as machine learning techniques become more sophisticated it can be asked why we even need humans any more. Hegarty talked about the importance of figuring out where we still need human ingenuity and creativity while also stressing the need to take advantage of machine learning and computer-assisted techniques going forward. The key is finding a balance between computers and humans to take advantage of the strengths of both. (Good news for us fleshy astronomers!)

Aaron Ludlow (International Centre for Radio Astronomy Research, University of Western Australia) presented a talk on Wednesday with some worrying implications on some of his findings involving cosmological simulations of galaxy formation. While simulations involving merely dark matter are fairly simple (since it only interacts gravitationally), simulations involving baryons as well—the normal matter we can see that makes up stars and gas clouds—get very complicated. Ludlow’s research shows that there are some effects that happen in simulations that wouldn’t happen in reality simply due to the limitations of the scales involved in the simulations. He ran a fairly simple test where he simulated a galaxy with dark matter and baryon particles of equal mass, then another test (much more similar to the kinds of simulations usually run) where the baryon particles were much less massive by a factor of about five. In both cases the galaxies started out in equilibrium, but in the second test the baryon particles ended up with more energy than they should have over time. This is potentially a big problem for people simulating galaxy formation, as it implies there may be non-physical effects showing up simply due to limitations within the simulations themselves. (Some inkling of the reaction from the audience may be had from the first question, which was simply “This isn’t a question, just a comment: that’s horrifying.”)

The SkyHopper CubeSat: Big Science with a Tiny Telescope

Thursday morning Michele Trenti (University of Melbourne) presented a more lighthearted and interesting talk about the proposed SkyHopper mission, which would involve using a tiny CubeSat (or possibly more than one!) to make observations in infrared from orbit around Earth. He even brought a prop along to show the size of one of the satellites, just a bit larger than a shoebox! This tiny telescope would be perfect for several kinds of science due to its fast slew time and relatively cheap cost to build. Multiple such satellites could be deployed for far less than the cost of a single current-generation space telescope, and with recent advances in technology they could still produce lots of useful data. Some highlighted uses include following up detections of transits from TESS to search for habitable Earth-like planets, rapid slewing to follow up Gamma Ray Burst detections, and measuring the Cosmic Infrared Background. 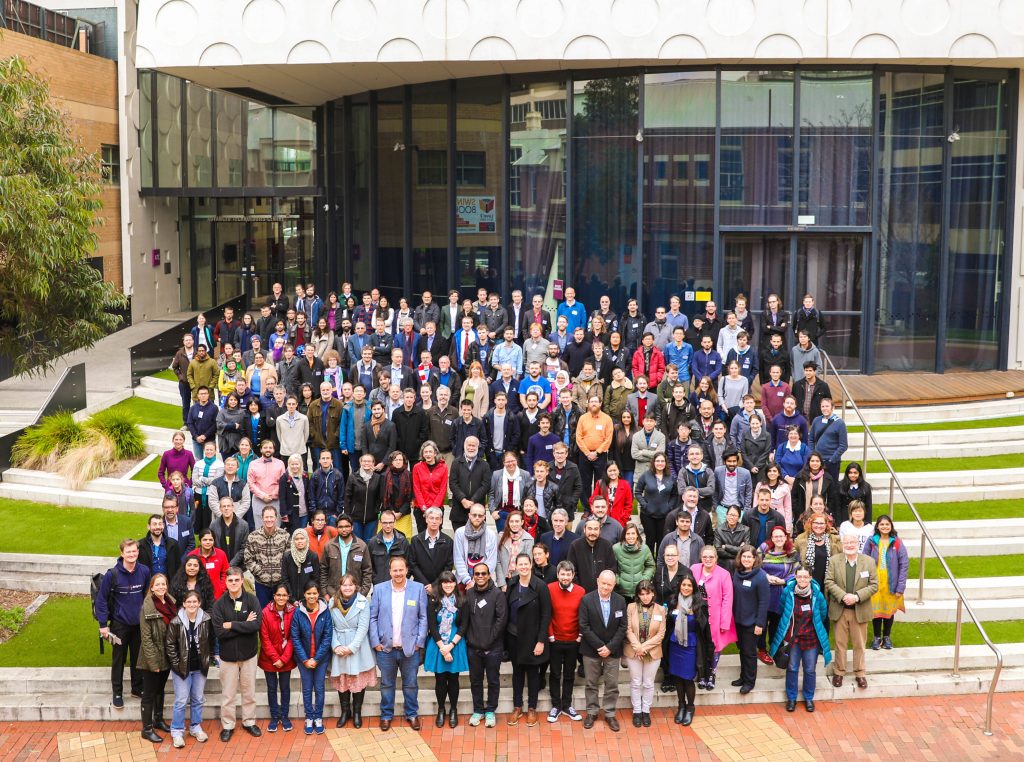 The ASA 2018 official group photo. You can tell how cold it was by how warmly everyone is dressed!

Listening to the Universe: Ground Based Gravitational Wave Astronomy and Australia’s Future Role

On Friday David Blair (University of Western Australia) gave a great talk about the history of gravitational wave theory and observations and some proposals for future observatories. Gravitational waves have been around as a concept since soon after Einstein proposed his theory of general relativity, but for many decades they were regarded as either a mathematical artifact or as being so faint that they would never be able to be observed. Some scientists refused to give up the search for them however, and thanks to them we’ve been able to listen to space stretching and shrinking from millions of light-years away as black holes and neutron stars collide to create the most powerful explosions in the universe—“explosions of pure gravity,” as Blair put it.

There were many more incredible talks and posters as well, and hopefully this gives a taste of the fascinating astronomy happening here in the Southern Hemisphere! 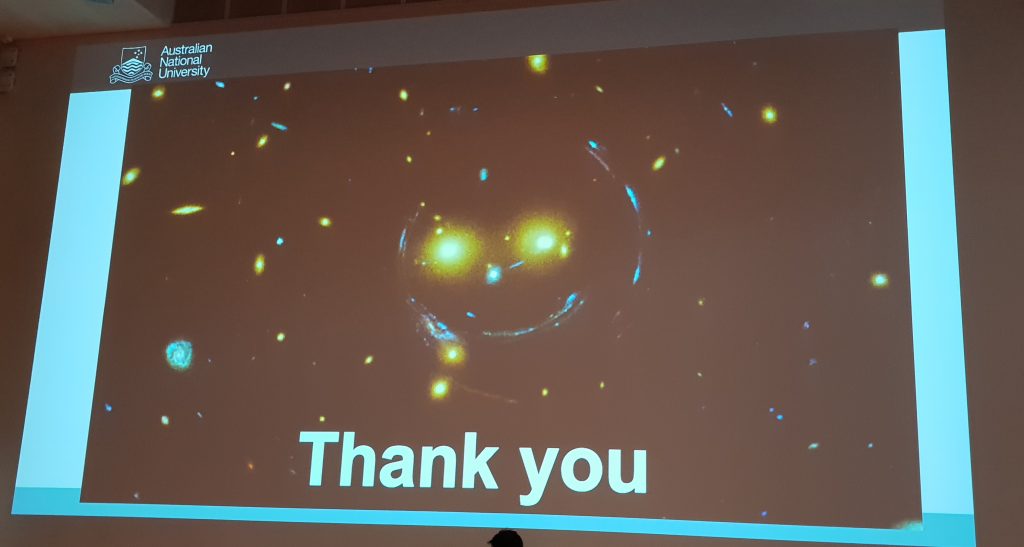