Just as archaeologists use artifacts from the past to learn about the evolution of humanity through time, astronomers seek to recover the history of star formation in the Milky Way using patterns in the chemical abundances of stars today. 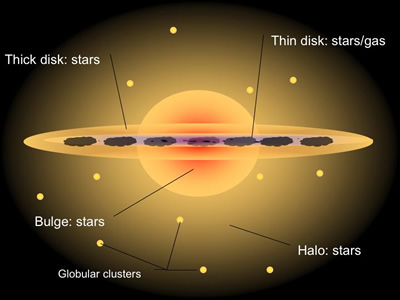 Fig. 1: This is a cartoon representation of structure in our Milky Way galaxy. Open clusters of stars are formed in the galactic disc. As shown, there are two distinct components of this disc, the “thick” and “thin”, whose origins are still debated. Image Credit: Swinburne University of Technology.

Stars formed from the same molecular cloud  form as either globular or open clusters (see Fig. 1), and have similar chemical abundances. This is a presumably unique imprint of their parent molecular cloud. As our galaxy evolves, star clusters disperse either naturally, or by force whenever our galaxy “eats” another, smaller galaxy. “Galactic Archaeologists” hope to use these fingerprints to their advantage by successfully implementing a procedure called “chemical tagging” (see this astrobite). By gathering the chemical abundances of stars today, individual stars can be grouped together as either born from the same cloud, or born within the same period of time in our galaxy. This can be applied , for example, to help determine the origin of the two disc components of our galaxy shown in Fig. 1: “thin” and “thick”. The authors of this paper are making the first large test of this procedure on 714 stars the the galaxy’s disc, with no previously known associations. In preparation for two revolutionary spectroscopic surveys called Gaia-ESO (which just launched this week!) and GALAH, the authors seek to test and refine the chemical tagging procedure.

Obtaining and Analyzing the Data:

The authors examine each of these stars, all located within 150 pc of our sun (a small fraction of our galaxy), with high resolution spectroscopic data taken previously at several telescopes. For each star, they obtain the abundances of 12 elements, Fe, Na, Mg, Al, Si, Ca, Ti, Cr, Ni, Zn, Y, and Ba, and record each star’s position and velocity coordinates. In addition, they use the currently accepted means of estimating stellar ages (accurately determining stellar ages is one of the most notoriously difficult things to do in astronomy). The chemical abundances are employed in an algorithm that takes each possible pair of star, and computes the probability that any two stars were born from the same cloud.

A significant portion of this paper is spent discussing the possible information that can be extracted from a chemical tagging experiment. Unfortunately their discussion is too long to appropriately summarize here. I will mention two main results: 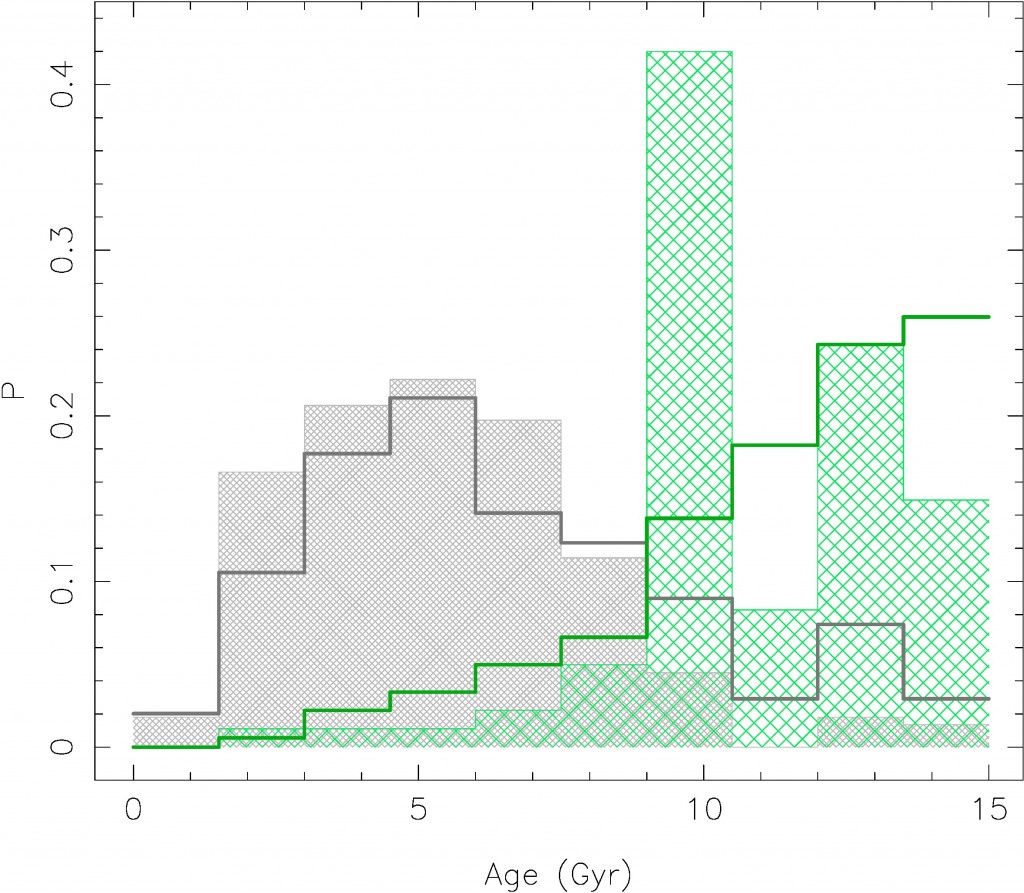 1) Using the selected groups, the authors re-calculate stellar ages for the grouped stars, using the related stars as additional age constraints. From this, they use known chemical abundance differences between thin and thick disc stars to place each selected group in one of the two disc components. For each component, they plot the distribution of ages as shown in Fig. 2. The shaded regions represent the thin (gray) and thick (green) discs with the newly calculated ages, while the solid lines use the original star-by-star age calculation. The authors argue this analysis shows two key points. The first, is that chemical tagging can provide additional and accurate constraints on stellar ages, as the recalculated ages (shaded) remove the long “tails” in the original distribution (solid lines). The second is that there is a definite age difference between stars in the thin and thick discs, indicating that a significant event may have occurred roughly 9 Gyr ago that differentiated these two components of our Milky Way galaxy.

2) From this analysis, the authors indicate that they may have successfully tagged 40% of their entire sample. However, they argue that this is much larger than should be possible given our understanding of how stars distribute themselves in the disk. They offer four possible explanations: 1) that the chemical fingerprints are not as unique as thought, 2) that star formation early in the Milky Way was of a different nature than we currently understand, 3) that stars do not disperse as much as suspected, 4) that chemical abundances of star formation regions only change significantly based upon location in the galaxy, not with what time period stars formed. They conclude that further analysis and numerical simulations could determine the answer to this question. They argue these methods applied to the larger Gaia and GALAH surveys will provide a wealth of information on the evolution of the Milky Way.

Wonderful Miras in the Heart of the Galaxy

A black hole with kick