A black hole with kick

Title: Millimetre-wave emission from an intermediate-mass black hole candidate in the Milky Way

Black holes cannot be observed directly– not with photons, at least. To detect them, we have been historically limited to observing the effects of black holes on luminous matter: things like individual stars, globular clusters, and gas clouds. Only very recently has it become possible to directly hear the photon-less gravitational-wave roar of merging black holes from a long time ago in galaxies far, far away.

Much closer to home, within the Milky Way, some ~60 black holes are known to exist. Most of them are stellar remnants. There are probably many millions more which have accumulated as generations of massive stars have died over the eons. The few galactic black holes which have been detected are in special configurations like binary systems, where the leeching of stellar material onto the black hole gives off showers of X-rays; or they sputter bursts of light from infalling gas or accretion disks; or, in perhaps one case, a lone black hole coasted in front of a background star and led to the flicker of a microlensing event. 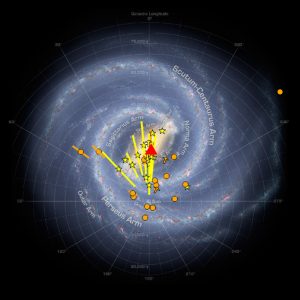 Fig. 1: Some of the Milky Way’s many lesser-known black holes. Circles indicate black hole transients whose masses are known by virtue of being in binary systems. Star symbols are candidates. The red triangle shows the rough location of CO–0.40–0.22*. (Adapted from Fig. 2 in Corral-Santana+ 2016.)

“Massive” is a relative term, though– for a black hole, a stellar remnant of several solar masses (Msol) is “low mass”. There is a huge gap in mass between these and the supermassive black hole in the center of the our galaxy, Sgr A*, which has a mass of about 4×106Msol. The formation mechanism of Sgr A* is very poorly understood. Black holes of intermediate masses–say, 102 to 105 Msol–would indicate a formation channel very different from that of a stellar remnant, and understanding that channel may help tease out the origins of Sgr A* and help us to understand the history of the Milky Way as a whole.

First, we have to find intermediate-mass black holes (IMBHs). In today’s paper, we’ll learn about the discovery of one such IMBH in our galaxy.

During survey work in 2014 with the Atacama Submillimeter Telescope Experiment (ASTE), a Japanese team found a “peculiar molecular cloud” hovering near the center of the Galaxy. The gas cloud is only some 16 light-years (~5 parsecs) across and has a wide velocity dispersion of ~100 km/s. These characteristics led the team to call it the high-velocity compact cloud (HVCC) CO–0.40–0.22. (‘CO’ is a holdover from the lead author’s CO emission surveys of the galactic center in the 1990s which turned up several HVCCs. The numbers indicate galactic longitude and latitude in degrees.)

The Japanese team followed up with much higher-resolution ALMA observations of emission lines of the molecules HCN and CO. HCN is useful for tracing high-density regions and shocks, and CO is good for tracing low-density regions because it is very common.

They found a dense central clump, along with other clumps, and… a “point-like continuum source”. The point-like source was enough for them to make a crude measurement of the slope of the spectrum. It’s not uncommon for measurements of spectral slopes at long wavelengths to be limited to just two or three data points. For example, emission from protoplanetary disks at millimeter wavelengths might have just a couple data points to determine that the emission increases as frequency with an exponent of +2. In the case of CO–0.40–0.22, they found that the rise in the object’s spectral intensity from 231 GHz to 266 GHz had an exponent, or spectral index, of +1.18&plusmn0.65.

Fig. 2: Left: A view of CO–0.40–0.22*, which is indicated with the cross. Contours show HCN emission at 231 GHz, and color for 266 GHz. The dots are particles in the “kick” simulation, overlaid here to show how they match with the data. Right: A view of the simulated molecular cloud in its orbital plane. The coordinates ‘b’ and ‘l’ refer to galactic latitude and longitude. Our line of sight towards CO–0.40–0.22* is into the page. Note that the grid of the orbital plane of the cloud is slanted relative to our line of sight. (Figs. 1b and 4 from today’s paper.)

The authors reason that if this spectral index is due to an underlying thermal Planck spectrum, then it would have to be coming from material at an unrealistically low temperature. Or it could be a luminous, high-redshift galaxy, but such a galaxy is unlikely to be sitting right inside such a small area of observation on the sky. Given an additional upper limit on the emission at X-ray frequencies provided by the XMM Newton satellite, the authors conclude that the underlying spectrum is consistent with a 1/500th-scale version of the spectrum given off by Sgr A*: a black hole!

Now imagine kicking at some pebbles on the ground. The pebbles go flying away and also scatter away from each other, right? So did that point-like mass give the HVCC a “kick” to make it go veering away with a high velocity dispersion? The authors conducted simulations whereby they tossed a cloud representing molecular gas at point-like objects of different masses until they could reproduce the cloud’s trajectory and velocity spread with a kicker of 105 Msol.

The inferred density of the object is too high for it to be a dense cluster of stars, and it can’t be seen in the infrared anyway. So all signs point to a black hole. A mass of 105 Msol makes CO–0.40–0.22* the second-most-massive black hole in the Milky Way, booting other black hole candidates of ~1,300 Msol, or even ~2,000 or ~3,000 Msol, into runners-up spots.

The authors finish by offering up an interesting possible formation mechanism. This black hole is far too massive to have been generated upon the death of a massive star, but it may have formed from stellar mergers. If that’s the case, then it should take an entire dwarf galaxy to produce a black hole so massive. Given the dozens of dwarf galaxies drifting around the Milky Way in various stages of cannibalization, the authors suggest that we may be seeing the black hole remnant of a long-lost dwarf galaxy.

This means that IMBHs could represent signatures of the Milky Way’s galactic merger history which has already been erased in the kinematics of stars, and further discoveries could also indicate the likelihood that Sgr A* is itself the product of stellar mergers.