Black hole X-ray binaries are a class of binary stars in which one of the stars is a several solar mass black hole and the other is a main sequence star. The main sequence star is overflowing and is transferring mass to the black hole, forming an accretion disk. Accretion causes these systems to be extremely bright in the X-ray portion of the spectrum. In fact, that is how many of these systems are discovered in the first place.

One of the common methods used to study binary systems is to measure their orbital period variations over a few years. There are many theories to explain possible causes of the period variations. To investigate these period changes, astronomers construct O-C diagrams. They first calculate the time when the binary is expected to be at a specific position in its orbit. The expected time is called the ephemeris and the position in its orbit is called the orbital phase. From this, they can calculate (the C) future predictions. Wait some time, see what you observe (the O), and you can measure how the system has changed. The difference between the observed and calculated phases are often very small, on the order of seconds at most. Which might sound small, but is in fact a big difference!

In today’s paper, the authors investigate the orbital decay of two black hole X-ray binaries. Combined with previous data, they were able to measure how fast the orbit is decaying and make predictions about the exact cause of this orbital decay. These systems are some of the best to look for this orbital decay because of their extreme masses compared to other systems. By obtaining spectra to create a radial velocity curve, the authors were able to add an additional O-C point with a larger baseline than before. This larger baseline is important because it allows time for small changes to build up, as we will see shortly. 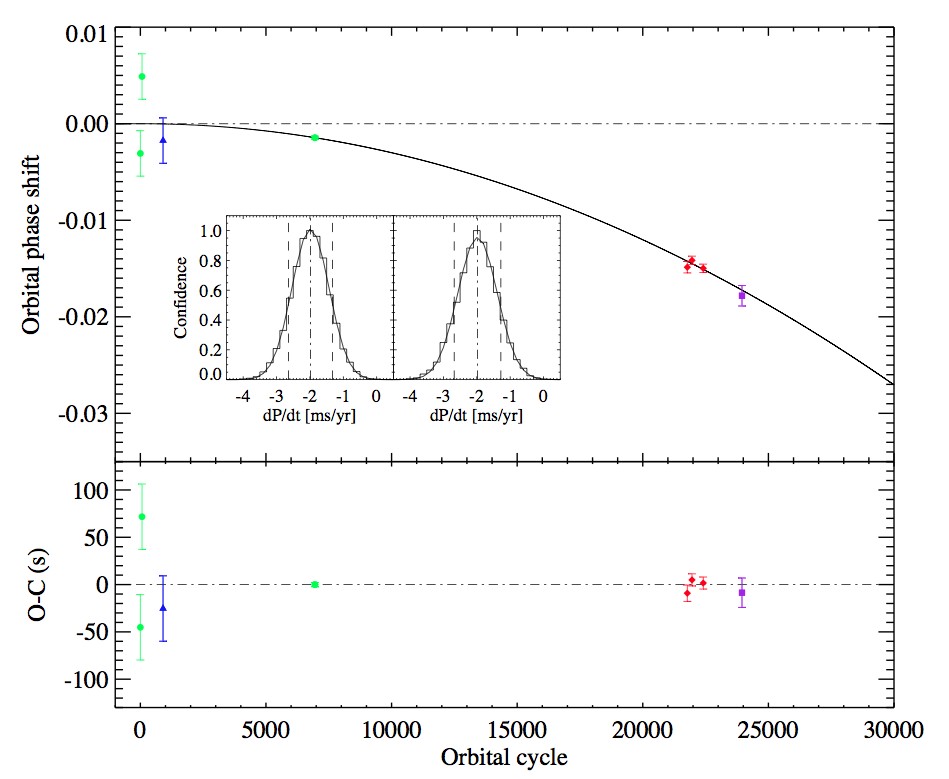 Figure 1: The top shows the O-C for the black hole x-ray binary XTEJ1118+480. However, it is shown as a phase shift, which just shows the deviation in phase instead of the actual O-C points. The purple point furthest to the right is the new measurement from this paper. The bottom shows the residuals from the best fit curve to the data presented at top.

Figure 1 shows the O-C diagram for one of the systems this paper studied. The top shows the shift in the orbital phase compared to the previously measured ephemeris. The negative numbers mean that the same orbital phases are occurring earlier than they are expected. So the orbital period is now shorter than it was previously. The data now span ~11 years.

The best fit to these data shows this system changes its period by -1.9 ms per year. The other system studied in this paper has a period change of -0.6 ms per year. Theory states that the expected orbital period change from magnetic braking or mass loss would be -0.02 ms per year. Gravitational radiation would be expected to contribute only -0.01 ms per year. Now you see why you need a large baseline and careful time measurements to detect this phenomena. This changes are extremely small! Both of these systems have orbital decays that are faster than expected.