There are stars missing from the center of our galaxy. The missing stars are red giants – a thousand times brighter than our Sun. How do we know these giants should be there? We see a number of young, massive stars in the nuclear star cluster in the inner parsec of our galaxy, which means that stars are actively forming there now. But if stars have been forming for a long time, then there should be older stars present too. As stars like our Sun age, they expand and brighten into red giants. How can such luminous stars go missing?

Today’s paper proposes a mechanism: the red giants were stripped of mass by collisions with a disk of gas. This gas disk was probably present because the massive stars near the central black hole form a disk. These massive stars must have formed from gas clumps. The authors simulate collisions with these clumps – showing that the red giants could have lost mass this way. But is this enough to render these stars invisible at the galactic center?

A Star in a Wind Tunnel

To investigate the impact of a gas clump on a red giant, the authors set up a hydrodynamic simulation. A snapshot of the simulation is shown in Figure 1. The star is modeled as a sphere of gas particles with density distribution matching that of a giant star. The gas clump is modeled as a constant density slab of gas particles that impacts the star.

Figure 1. Simulation of a red giant-gas clump collision. Brighter (darker) color shows areas of higher (lower) gas density. The star enters the gas clump in the left panel and leaves in the right. Note the curved bow shock ahead and turbulent wake behind the star. After the star exits, it expands beyond its initial size.

In essence, the authors have placed a star in a simulated wind tunnel. The authors turn knobs on the wind tunnel to see how varying the speed of the impact, the number of impacts, and the gas density changes the mass stripped from the star.

The authors consider two different scenarios for star-clump collisions. In one, the star continuously plunges through a single clump. The other (more realistic) scenario simulates the star repeatedly colliding with several separate clumps. In each case the total time the star spends interacting with clumps is the same, so that the effect of repeated vs. continuous impacts can be isolated.

Figure 2. Mass of star colliding with gas clump as a function of time. The left plot includes simulations using lower density clumps. The right plot shows simulations with a 10x denser gas clump. Note the scale on the vertical axis. The star loses much more mass when colliding with a higher density clump. The collision speeds for each case are shown: the higher the collision speed, the greater the mass loss.

Repeated collisions with separate gas clumps increases the efficiency of mass stripping. After each collision the star expands beyond its original size, increasing its cross-section for the next collision. This effect is seen in the right panel of Figure 1. After the star exits the clump it has expanded from the initial snapshot. A more detailed look at this effect is presented in Figure 3. The initial density profile of the star is compared to the density profile after 7 collisions. The star has increased in size by 50%, and subsequent collisions will be even more effective at removing mass. Repeated collisions remove twice the total amount of mass as the continuous case for the same collision speed and gas density. The most efficient way to remove mass from a red giant, then, is to bash it repeatedly with dense gas clumps at high speed. 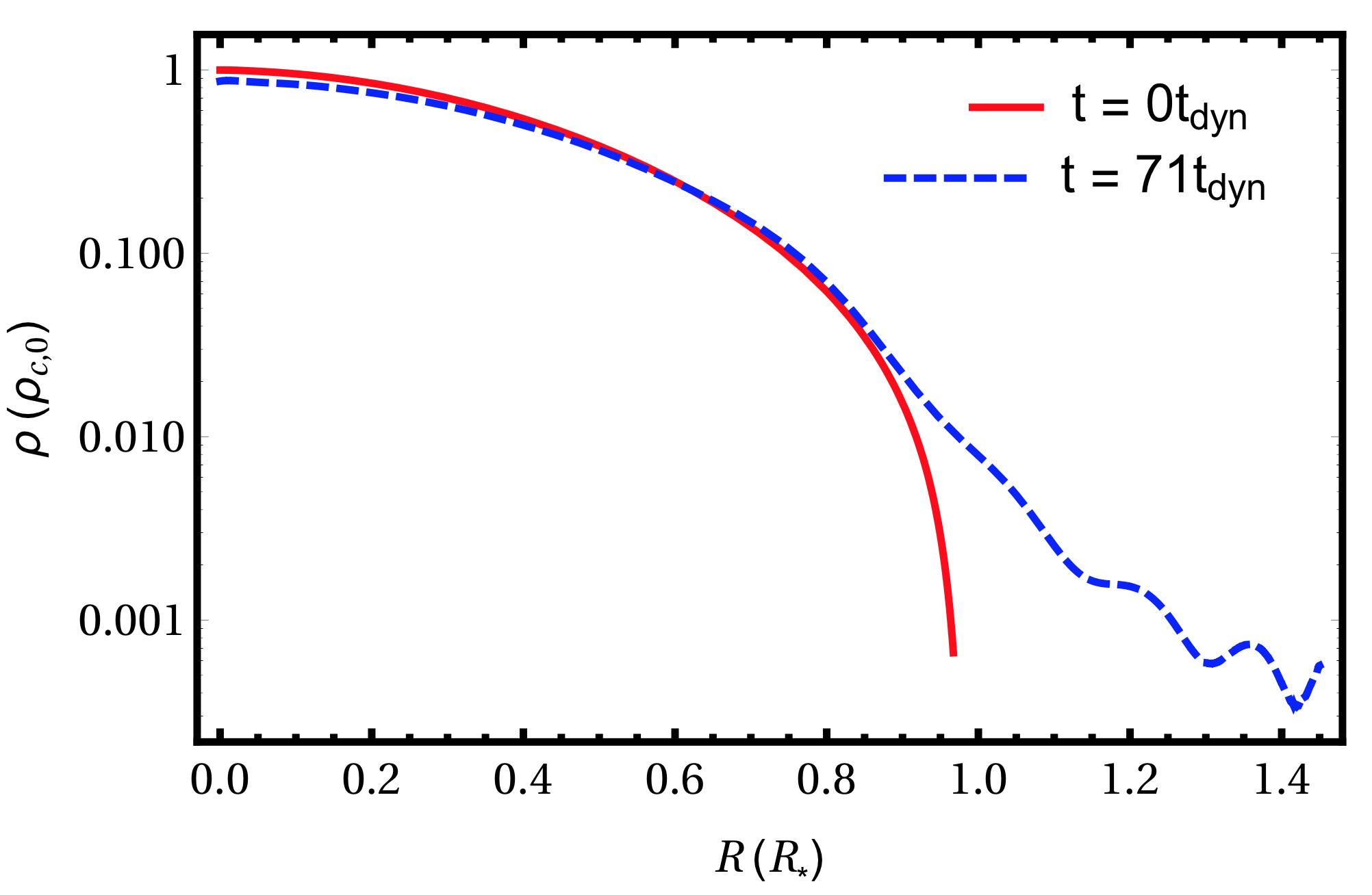 Figure 3. Density vs. radius of a red giant star before (red solid line) and after (blue  dashed line) 7 collisions. The star expands past its original size, increasing the surface available for stripping by the next collision. Repeated collisions remove mass more efficiently than a single continuous collision.

The above simulations show that repeated collisions with clumps in the accretion disk can strip red giants of a lot of mass. Can this mass loss explain why we don’t see these red giants in the Milky Way’s center? To answer this question fully would require modeling the evolution of stripped red giants. Until the effect of mass stripping on the luminosity of the star is known, the connection between star-disk collisions and the missing red giants problem isn’t complete.

How realistic is the simulated scenario where red giants collide with many dense clumps? The authors calculate the average time between collisions expected given the number of clumps, the size of the disk of clumps, and the clump size. They plug in educated guesses from the number of massive stars observed, the size of the disk of stars, and the size that a clump would need to undergo gravitational collapse into a star.  The average time between red giant – clump collisions is estimated to be 8 billion years. This is a problem, as it’s about 1000x longer than the lifetime of a red giant. The collision rate needs to be increased by 1000x to allow multiple collisions. The authors speculate that the easiest way to do this is by increasing the number of gas clumps in the disk. If the inner star cluster is just the remnant of a much richer predecessor, then there were many more gas clumps to bombard the red giants.

This paper shows that collisions between red giants and gas clumps can remove a substantial fraction of the star’s mass. Does this mass loss render red giants too dim for us to see? Was the environment in the center of our galaxy conducive to repeated gas clump bombardment? These questions must be answered to solve the mystery of the missing giants.