Title: An intermediate-mass black hole in the centre of the globular cluster 47 Tucanae

Our universe is speculated to host a plethora of black holes, and they come in varied sizes: stellar mass (SBH), intermediate-mass (IMBH), and super-massive (SMBH). Of this assortment, SBHs, that have masses of a few to tens of times the mass of our Sun, as well as the SMBH variety that can be a million- to billion-fold heavier and found in the central engines of active galactic nuclei at large redshifts, have been studied and characterized for a long time. On the other hand, what remained elusive to this point, has been the existence and properties of a novel class of long-lived black holes (IMBHs), thought to represent the evolutionary bridge between SBHs and SMBHs.

In lack of a way of creating IMBHs, scientists have contemplated various formation mechanisms for them such as collapse of extremely massive primordial stars, core collapse of the centers of dense stellar systems or merger of smaller BHs, all of which favour a dense, primordial environment such as the center of a globular cluster. Considering this, faithful observational campaigns have targeted globular clusters for many decades seeking observational signatures of these objects, but the quest so far has been rife with uncertainty, unsatisfactory upper limits, and tantalizing but inconclusive evidence. For example, kinematic modeling of the globular cluster Mayall II in Andromeda galaxy indicated the presence of an IMBH, but alternative evolutionary dynamical modeling showed that the data could be explained in absence of such an object. In 2014, IMBH candidate M82 X-2 was revealed not to be a black hole at all but rather a neutron star, while plenty of other candidates lack sufficient flux ratio in radio vs. X-ray wavelengths to match the dynamical mass estimate of an accreting IMBH. 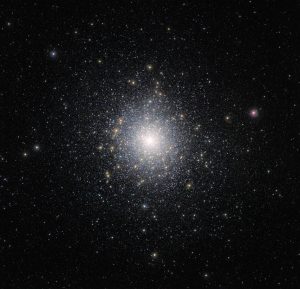 Very recently, Kızıltan et al. published the evidence of an IMBH residing – in line with previous theoretical predictions – at the centre of 47 Tucanae (or NGC 104; see Figure 1.), one of the most massive globular clusters known. Kızıltan and colleagues made this discovery by examining the dynamical state of the cluster with the help of pulsars residing within it. (Pulsars are rapidly rotating neutron stars emitting a beam of electromagnetic radiation that appears as pulses of light sweeping in and out of our line of sight at regular and precisely measurable intervals, just like pulses from a rotating lighthouse lamp).

How exactly did they do it?

Within a globular cluster, massive stars tend to sink towards the center. In the presence of a massive central mass (say, a black hole), as more stars sink inwards, the core heats up and stars start getting scattered off of the black hole, as well as each other. The propagation of the central black hole’s dynamical influence outwards (i.e., the inner stars scattering outer stars, and those scattering the ones even further from the center) ultimately affects the overall spatial arrangement and acceleration of stars in the cluster. Using the pulse-period measurements of pulsars to determine the distribution of their accelerations, the authors were able to infer a distinct imprint of the central massive object’s gravitational potential on the 3-D dynamical state of those pulsars. Moreover, using N-body numerical simulations of the cluster, the authors confirmed the mass of the object to be 2,200 times that of the Sun (Figure 2). This number is in vicinity of the previously established upper limit of 2,060 solar masses for the putative central object, and lies well within the mass regime of an IMBH. 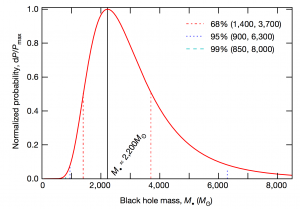 Figure 2. The normalized probabilities of N-body models with different black hole masses, showing a conspicuous peak around 2200 solar masses. (Figure 4a. in the original paper)

If substantiated by other studies, the evidence for an IMBH by Kızıltan et al. will not only bring long-sought validation for the existence of IMBHs, but also add to our current understanding of black holes in other contexts. To this end:

1) One can study whether IMBHs can potentially host ultra-luminous X-ray sources (ULXs) that are too bright to be an accreting SBH and too distant from the centers of galaxies to be caused by SMBHs.

2) By the virtue of bridging the mass-gap between SBHs and SMBHs, a detailed analysis of IMBHs and their environments can shed light on accretionary growth models of SMBHs, and whether IMBHs can act as their initial seeds.

These questions in case of the IMBH in 47 Tuc, unfortunately, remain unanswered due to the absence of any detectable electromagnetic emission from it, suggesting that it is likely lurking in a gas-deficient environment. Whether this is typical for IMBHs or an exception, will become clear in time to come as scientists continue to expand our search for more objects through the cosmos.