Black holes, the strange objects within which time and space break down, have never directly been observed: trying to see something from which light cannot escape is a bit foolhardy (though they do emit other types of radiation that we may have glimpsed). However, Astronomers can see the effects that these objects have on their surroundings, and infer their presence. For example, observations of the stars at the centre of our galaxy suggest they’re orbiting something huge, but we can’t see anything there – the only reasonable candidate is a Supermassive Black Hole.

Such giant black holes have been observed at the centres of almost all galaxies and some of them can get very hungry, gobbling up nearby gas and spewing it out in huge jets. These active black holes are known as Quasars, and they’re some of the brightest objects in the sky. We can observe them as far back as just 700 million years after the Big Bang (the universe is 13.7 billion years old, so this is really early in the universe’s history). Such large black holes so soon after the Big Bang are controversial though – they are, arguably, too big.

The controversy centres on how astronomers believe these giant black holes first formed. One theory suggests that seed black holes, formed not long after the big bang, would slowly grow, by accreting gas, in to the giants that we see as Quasars. Unfortunately though, there is not enough time for these tiny black holes to gain enough mass. Another theory suggests that the first stars, truly giant objects with masses hundreds of times larger than our Sun, would quickly explode as supernovae and collapse in to big black holes. But again, not big enough. 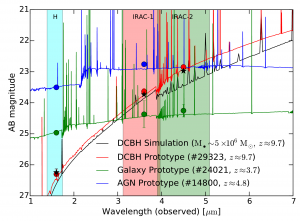 Figure 1: Observed spectrum of light from three objects in the catalogue, a Galaxy (green), Active Galactic Nuclei (AGN, in blue, otherwise known as a Quasar), and a Direct Collapse Black Hole candidate (red), alongside the theoretical spectrum predicted by simulations (black). The close agreement between the simulated spectrum in black, and the candidate in red, led the authors to believe that this could be a direct collapse black hole.

This led theorists to come up with a new explanation: Direct Collapse Black Holes. If the conditions in the early universe, before the first stars and galaxies, were just right, then large gas clouds could collapse, without fragmenting, directly down in to giant black holes. These would be big enough to grow in to the Quasars we observe later. A neat solution! (see the following Astrobite for more details on how the collapse happens). If the theory is true then we could potentially see the light from these monster black holes at the centre of the giant clouds. This is the subject of today’s paper. The authors carry out simulations of a giant black hole at the centre of a cloud of gas, and use this to predict the kind of radiation such an object would emit, and how it might look to us observing it from Earth today.

The gas that collapses to form the black hole is pristine, by which we mean it has almost no heavy elements (bigger than Hydrogen or Helium), known by Astronomers as metals. Metals can only be formed in stars, and since the direct collapse black hole forms before the first stars there aren’t any metals available. The radiation emitted by the black hole as it eats the nearby gas will travel through this pristine gas, and leave signatures in the light. It is these signatures, modelled using the simulations, that the authors then go looking for in real observations (see Figure 1 for an example from the paper).

They begin by looking at objects in the GOODS-S field, a patch of the sky surveyed by lots of different observatories in a number of different wavelengths. They narrow down their search by only including objects which have the same light signature as the one that they modelled. They also exclude objects that aren’t from the early universe (below a redshift of six). Finally, they exclude objects without a strong X-ray signal; supermassive black holes in the nearby universe emit X-rays, so it’s reasonable to assume that these early black holes would do the same. After this filtering, they end up with two candidates, shown in Figure 2. In the authors own words, “These objects represent the most stringent observational identification of black hole seed candidates, likely formed as Direct Collapse Black Holes, so far obtained.”

Figure 2: The two direct collapse black hole candidates identified in the GOOD-S field. The background image is in the near infrared, the green contours show the X-ray emission. 29323 has a redshift of 6.06, whilst 33160 is at a a whopping 9.73, just 500 million years after the big bang.

Exciting stuff! But there are a few caveats, which the authors are frank about. For a start, they don’t actually model the initial collapse of the black hole, and how this actually plays out is still uncertain. They also assume that the gas cloud is spherical, that the black hole eats gas very efficiently, that there is absolutely no nearby star formation, and that the ages they estimate for each object are accurate, which is not necessarily the case (measuring the ages of such distant objects is notoriously difficult).

So there is still work to be done. But if true, the discovery will solve a long standing problem in the astrophysics of the early universe, and open up a whole new world of questions around how such objects evolve, and their connection to later galaxies.