Where are the Sun’s grandparents? 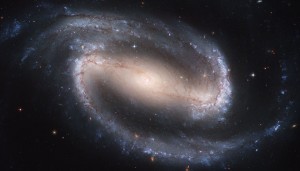 Figure 1: NGC 1300, a barred spiral galaxy. You can notice that there’s a huge difference between the colors in the central region and on the spiral arms. Image Credit: Hubble Heritage Team, ESA, NASA.

When one looks at an image of a spiral galaxy such as NGC 1300 on Figure 1, the difference in color between the central region called the bulge and spiral arms strikes the eye. The bulge has an yellowish color, while the spiral arms are blue. This actually reflects the existence of different stellar populations in each region. The spiral arms are sites of active star formation and their luminosities are dominated by young hot O and B stars, which are bluish. Astronomers call these young stars Population I stars, and our Sun is one of them. Besides being young, they are also metallic, since they formed out of metal-enriched materials from the preceding stellar generations. On the other hand, stellar formation has more or less ceased in the bulge, so the yellow light is caused by evolved stars such as red giants. These evolved stars belong to the Population II, which is less metallic than its successors, the Population I stars. They do, however, contain some measurable percentage of metals. Since the early Universe contained only hydrogen and helium (and a bit of lithium and beryllium, if you want to be thorough), where did the metals come from? As with all heavier elements, they must have been synthesized by stars. In this case, by the first stars to ever form, which were composed only of hydrogen and helium. These stars with null metallicity are, by definition, Population III stars.  But no Population III stars have been seen yet. Where are they hiding?

Are the Sun’s Grandparents still around?

Where should we be looking?

To find Population III stars, it’s best to look in the Milky Way halo. This is because Population III stars in the inner region of the Galaxy can be contaminated by tiny percentages of metals from accretion and so be unidentifiable as Population III stars. Some objects which could fit this profile were already found, the so-called hyper or ultra metal-poor stars (like the famous “star that should not exist”). So how did Population III stars maintain their true identity and remain metal-free? They have to escape from the cloud in which they formed. There are two ways to achieve this: gravitational slingshots due to multi-body interactions, and ejection of the secondary star (in this case, our Population III star) from a binary when the primary star explodes as a supernova. The authors studied only the latter case, which is slightly easier to model. The escape probability will depend on lots of parameters, including the poorly known initial mass function (IMF) of population III stars, so the authors studied many different scenarios, such as different types of IMF, formation redshifs, and mass ratio distribution of binaries. As you can see in Figure 2, the escape probability can be as high as 0.3, or 30 %. 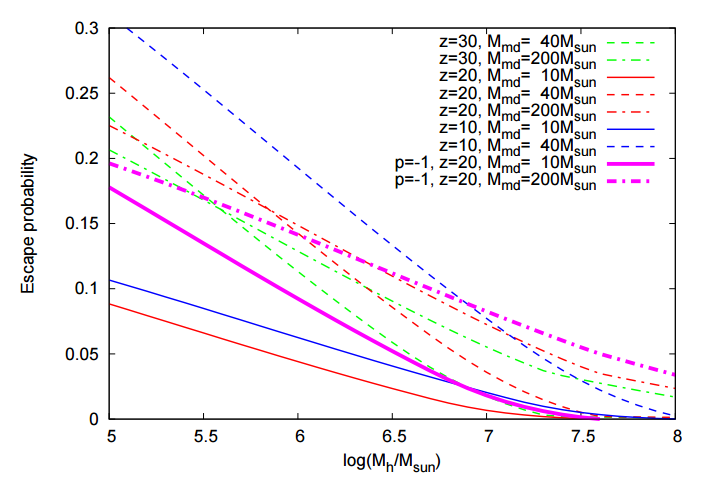 Escape probability of the low-mass Population III star (when its binary companion explodes as a supernova) as a function of the mass of the primordial mini-halo in which it formed. Mmd is the median mass of the adopted IMF, z is the formation redshift, and p, which is zero unless otherwise indicated, is the power-law index for the mass ratio distribution of binaries.

The authors used the escape probabilities to estimate the number of escaped stars in each scenario. They computed that up to 3800 population III stars might have survived to nowadays, with up to 170 managing to escape the dark matter halos in which they formed. But to find these escapees, we must know where to look, so the authors went one step further and estimated the spacial distribution of the escaped Population III stars in the Galaxy. In order to do that, they assumed that the dark matter halos where the first stars formed undergo a spherical collapse to form the Milky Way. They then computed the orbit of each escaped star formed in this model and looked at the distribution of their galactocentric distances. 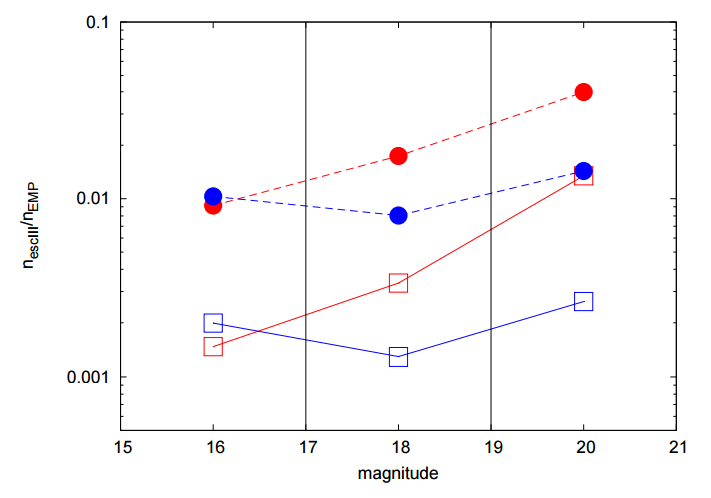 Figure 3: Fraction of escaped population III stars compared to extremely metal poor stars for giants (red) or subgiants (blue) for three magnitude bins. Squares are the results for their fiducial set of parameters, while circles consider an optimistic set.