Foreword:   These are quick summaries of two astronomy papers on Nature over past two weeks.  Don’t want to emphasize one journal over others; my prejudice is that all research should be simply online and free, hence the magic of arXiv and astro-ph; plus, journals are sooooo mainstream…

But, if you’re inclined to keep up with the absolute forefront of human civilization, I would encourage you to make a habit of reviewing the journals Nature and Science every week.  Really.  Hell, I’d even skim Cell, New England Journal of Medicine, and The Lanclet every once in a while … PNAS is also apparently good, but a bit lacking in the “pretty pictures” criteria.   Anyways, eat your vegetables!

Previously, all known supernova (SN) were bright stellar explosions, their brightness powered by these three mechanisms:

(B) Ionization and recombination of hydrogen driven by the explosion shock.

However, the authors report the discovery of a new class of superluminous supernova that defy these rules. Using the Palomar Transient Factory, they found 4 supernova between the redshifts of 0.2-0.5 that looked similar to two previously discovered weird supernovae SCP 06F6 and SN 2005ap.

These supernova had extremely bright peak luminosities, with significant early ultraviolet flux not blanketed by absorption from calcium and iron lines, did not show any trace of hydrogen, and their light curves faded fast, much faster than what you’d expect from radioactive decay. 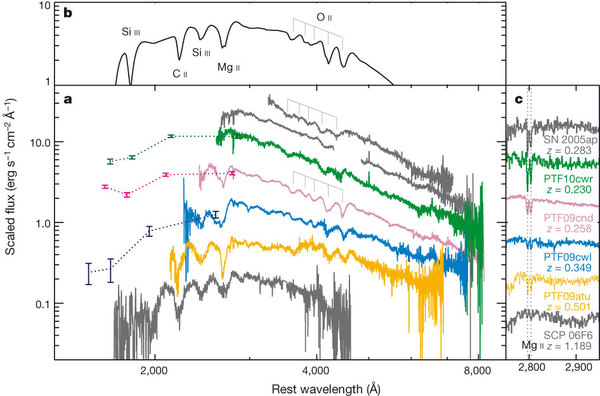 The atypical spectra (shown above) of these SNe showed no hydrogen lines, and were all similar to each other, which assisted the authors in initially identifying them all as the same phenomena. 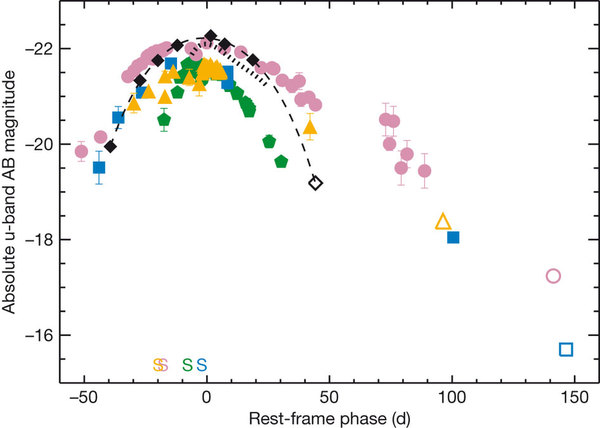 As seen above, the light curve of these events peak at -22 AB mags, almost 10 times as bright as Type Ia SNe.  However, their late-time light curves decay 3 times as fast as what you’d expect from 56Co decay.  In addition, the inferred photospheric radius at peak luminosity is too large for the radiated photons to have come from the explosion shock in the progenitor star, as adiabatic losses would’ve exhausted the energy by the time the star had expanded that far.   Thus, we have ourselves a conundrum — an uber bright supernova with no power source!

(1)  The pulsational pair-instability mechanism can strip the outer layers of an extremely massive star (90-130 solar masses) in the last few years of its life.  The star eventually dies as a core-collapse supernova, which may interact with the previously ejected carbon/oxygen rich shells to drive the observed luminosity.

(2)  The power source could be a prolonged energy injection by the remnant central engine.  Models of newly formed magnetars, born with a B field of ~10 billion teslas, which then rapidly spin down could account for the observed luminosity.

In any case, looks like we have a new class of supernovae on our hands!   The more the merrier, as ultraluminous supernova can serve as distant beacons that mark and illuminate their nascent host galaxies, allowing us to study their surroundings.  Moreover, these supernova may shed insight into their rare, extremely massive progenitors.  Once again, bigger explosions are way better.

In the recent years, the Hubble Space Telescope has discovered many high redshift galaxies (z>6) in the epoch of reionization, the “let there be light” moment when the first stars and galaxies ionized all the gas in the universe.  However, apart from a few voracious quasars at z~6, which represent only the absolute most luminous and massive of their kin, the existence of supermassive black holes that usually lie in the center of every galaxy has never been confirmed — until now.

Thanks to Hubble, we do know where the high redshift galaxies are located.  Hence, the authors cross-correlated the X-ray photon count from Chandra with the location of the target galaxies, and found a small but very real signal (7-sigma for the hard x-rays!)   Without statistical methods, no one would’ve seen these black holes with current instruments, as the signal amounted to less than 5 photons per galaxy!

Notably, a large ~9X difference was observed between the hard band (14-56 keV rest frame) and soft band (3.5-14keV rest frame), implying very large neutral hydrogen column densities in these galaxies, the metals within absorbing the majority of the soft X-ray photons.   However, the same neutral hydrogen would absorb ultraviolet light even more effectively.  Thus, black holes couldn’t have contributed to the reionization of the universe — stars were the culprit. 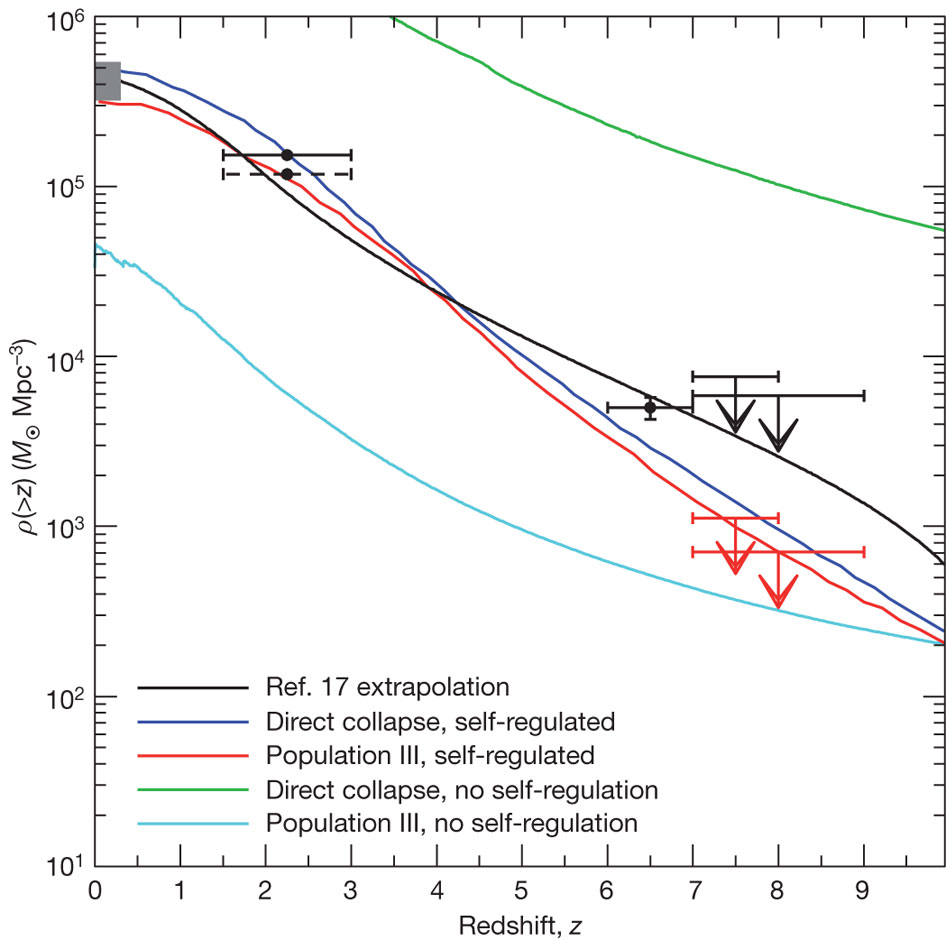 Black hole mass density as function of redshift. The black and red error bars are the limits from the hard and soft x-rays, respectively.

Using an extended Press Schechter framework to model the growth of dark matter halos, the authors seed the haloes with black holes, and track the growth of these black holes with time.   They use two models for the black hole seeds: the “Direct collapse” model assumes the seeds resulted from the gravitational collapse of primordial gas, which leads to higher seed masses, whereas the “Population III” model assumes that the black holes started out as compact remnants of Pop III stars, leading to lower seed masses.  Moreover, to grow the black holes, they use a binary model where self-regulation is either on or off.  Self-regulation assumes that the accreted mass scales with the host halo properties, and is invoked to explain the astute observation that supermassive black hole mass is tightly correlated with the velocity dispersion of its host galaxy in the local universe.

Using this model combined with black hole mass density estimates from their data (see above figure), the authors conclude that regardless of the black hole seed model, the self-regulation of black hole growth is required even at the highest redshifts.  This suggests that even in the black hole’s infancy, there is a fundamental link between the galaxy and black hole mass assembly process!