Today’s guest post was written by Elen Golightly, a PhD student at the University of Leicester. They are currently doing research about Tidal Disruption Events which they model using hydrodynamical simulations. In their free time they’re usually painting/sewing and cuddling their cat.

Figure 1: A computer simulation of a tidal disruption event: the disrupted stellar debris falls towards the black hole and circularises into a disc around it. [NASA/S. Gezari (JHU)/J. Guillochon (UCSC)]

When a star wanders too close to a supermassive black hole at the centre of a galaxy, it can get stretched and pulled apart in what astronomers refer to as a ‘tidal disruption event’ or ‘TDE’. For this to occur the star must pass within tidal radius, the distance at which the tidal force from the black hole can overcome the self-gravity that keeps the star intact and spherical. Passing stars are not always disrupted however—those that plunge too deep within the tidal radius may be swallowed whole, while others may only be partially disrupted or miss the tidal field altogether, avoiding disruption completely.

A star that finds itself within the tidal radius begins to stretch into a stream, getting longer as it continues its orbit around the black hole. Approximately half of the elongated stream of stellar debris is then gravitationally bound to the black hole, while the other half remains unbound and escapes out into the galaxy at high velocities. The bound debris begins to fall back towards the black hole and forms an accretion disc that feeds it (see Figure 1). This accretion process can power a highly luminous and detectable flare from the disc.

The authors of this paper have modelled these TDEs computationally and were the first to simulate the full evolution of the events with realistic parameters. They simulated these events using PHANTOM, a 3D hydrodynamical code. Their system used a solar mass (1M⊙) star, modelled as an adiabatic sphere of gas made up of one million particles, and a 106M⊙ black hole ( a black hole mass between 105−108M⊙ is a reasonable choice). The authors started the star outside of the black hole’s tidal influence and ran the simulation until 90% of the disrupted material had returned to the disc, which was about 10 years after disruption started. 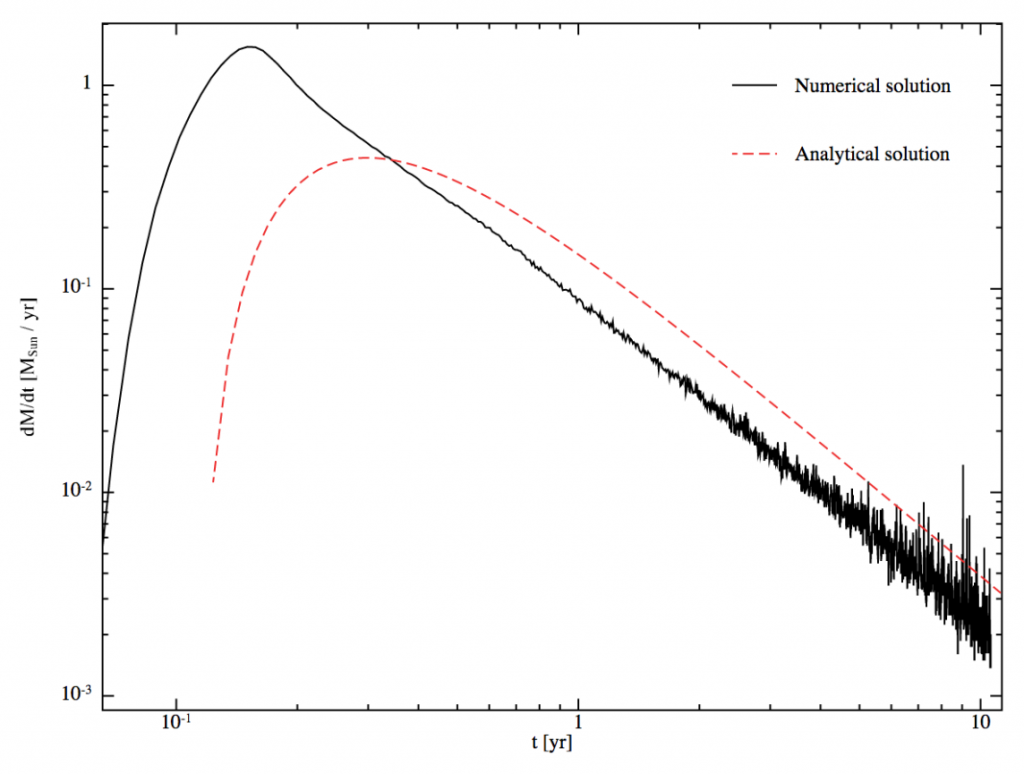 Figure 2: The fallback rates of the disrupted stellar debris from analytical predictions (red dashed) and the author’s numerical simulations (black solid). The difference in initial return times is due to a change in stellar structure that the star would experience at the time of disruption. The power law decays both follow t−5/3 until the later stages where the simulation shows some variability due to self-gravitating clumps.

In these simulations the accretion disc that forms around the black hole is not modelled. Instead the particles of the stream are removed from the simulation once they reach the disc and are classed as ‘accreted’. They measure a ‘fallback rate’ or ‘return rate’ that is set by the amount of particles accreted over time. This rate typically follows a curve that rises to a peak followed by a power law decay. Since the 1980’s the curve was predicted to decay with time as t−5/3, where t is typically measured in years. The authors investigate 1) how well the simulations match predictions with this power law behaviour and 2) the effects of self-gravity throughout the stream.

Analytical predictions expect the fallback rate of the stellar debris, as well as the observed lightcurves, to decay as t−5/3. The authors show the fallback rate against time in Figure 2 and we can see that their numerical simulations (black) do approximately follow the analytical prediction (red dashed). The numerical result, however, shows that the first fallback of material reaches the accretion disc sooner than predicted. The authors suggest this is due to the distortion of stellar structure that the star experiences at the tidal radius. Shortly after the peak, the power law decay nicely follows the expected t−5/3 until some variability during the later stages.

The authors suggest this later variability, seen in the fallback curve ∼2 years post-disruption, is due to the accretion of self-gravitating clumps that have formed in the stream. At large distances from the black hole the self-gravity of the star can dominate over the tidal force, allowing the stream to start fragmenting into these clumps (see Figure 3). The accretion of these clumps causes a sudden increase in the fallback rates compared to t−5/3, followed by a sharp decrease to compensate for less mass between clumps, which is shown in the noisy data in Figure 2. The authors point out that the effect of self-gravity at large distances from the hole shows the importance of modelling the full evolution of a TDE to get accurate fallback rates.

But what causes the fragmentation to occur? Ruling out any computational reasons for noisy data, the authors suggest the stream is gravitationally unstable and fragmentation can occur following any small perturbation to the debris stream. 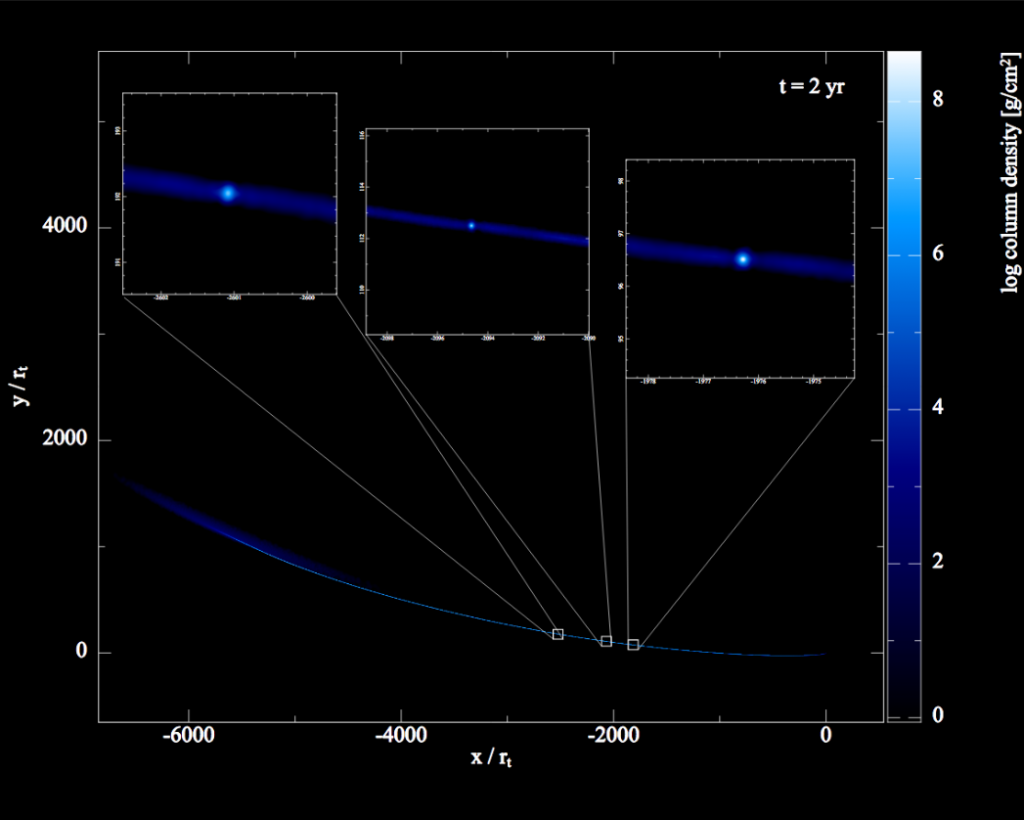 Figure 3: The zoomed in sections of the stellar debris stream show the stream has fragmented into self-gravitating clumps, where the colour represents the density of the debris.

TDEs are hard to identify and the current sample size of observations is relatively small. Part of the problem in identifying TDEs is that early fallback stages may not always fit the predicted models owing to properties such as stellar structure or pericentre distance. Additionally, t−5/3 may only be reached during the later stages by which time the event is too dim to observe. One well known observed TDE is SWIFT J1644+57, which the authors discuss in the context of their findings.

A possible cause of the perturbations in the stream is the interaction between stellar debris and any material in the vicinity of the black hole. SWIFT J1644+57 could be an example of this variable fallback rate due to clump accretion. The observed data did not have any optical or UV emission, suggesting the presence of dust in the environment with which the stream could interact, therefore leading to fragmentation.

In summary, the authors simulated a solar mass star being tidally disrupted by a supermassive black hole. They were the first to model the full evolution of a TDE for these parameters which led to better understanding of the long term effects on the debris stream. The authors showed that their numerical simulations follow similar behaviour to analytical predictions but have a small discrepancy in time and shape. The fallback curve decay follows the predicted t−5/3 until later in the stream evolution where they see some variations. They also found the stream starts to fragment as self-gravity dominates at large distances from the black hole, and suggest that this is the cause of the variability in the fallback curve.

In a future paper, the authors presented a more detailed and complete analytical and numerical analysis of the debris stream.