Title: Galactic Doppelganger: The chemical similarity among field stars and among stars with a common birth origin

Stars are not born alone. Stellar formation occurs inside giant molecular clouds, which collapse when the internal gas pressure cannot overcome gravity. This is known as Jeans instability. The increase in density caused by the collapse leads to a fragmentation of the cloud, forming thus not only one, but many stars from the same original material. Consequently stars that are born together have the same initial composition. In addiction, these sibling stars are subjected to each others’ gravitational pull, so the formation process usually results in a stellar cluster rather than isolated stars.

Some stars can be ejected from the cluster in many-body interactions. Moreover, most clusters don’t survive long, since they are disrupted due to gravitational interaction with the surroundings. This implies that siblings are not always found together. They still preserve, though, one common birthmark: their similar chemical composition. Thus one can in principle identify population members via comparing stellar abundances. This is known as chemical tagging and is widely used to characterize the components of the Milky Way and constrain its assembly history (see bite1 and bite2).

However, there are a few considerations to take into account. First, because of differences in the evolutionary process, some spread in abundances is expected among sibling stars. Second, there’s always the chance that two stars that are not born together have the same current abundances by pure chance, being so-called doppelgangers. These two difficulties were usually ignored in chemical tagging, since no estimate of their magnitude existed. Today’s paper aims to put an end to this limitation, using precise abundance determinations to estimate intra-cluster dispersion, and doppelganger rate in the Milky Way’s thin disk.

To obtain a large sample of stars and achieve high-precision abundance measurements, the authors used data from APOGEE, a project which is part of the Sloan Digital Sky Survey. APOGEE takes spectra of mainly giant stars and allows abundance estimates for tens of chemical elements. APOGEE’s pipeline estimates each star’s physical parameters, effective temperature (Teff) and surface gravity (log(g)), and also element abundances. The authors’ first step was to correct the abundances for systematic uncertainties (such as those arising from dependence on stellar physical parameters) with a training sample containing thousands of field stars.

These corrections were applied to test data, consisting on spectra of about a hundred stars in seven well-studied open clusters. Fig. 1 shows the estimated abundances for M67 (shown in the featured image) as an example. As expected, there isn’t much spread in abundances for the stars which are part of the cluster. Using the same method, abundances were estimated for other 90 open clusters. The obtained uncertainties were typically 20% – 50% lower than obtained in other determinations. 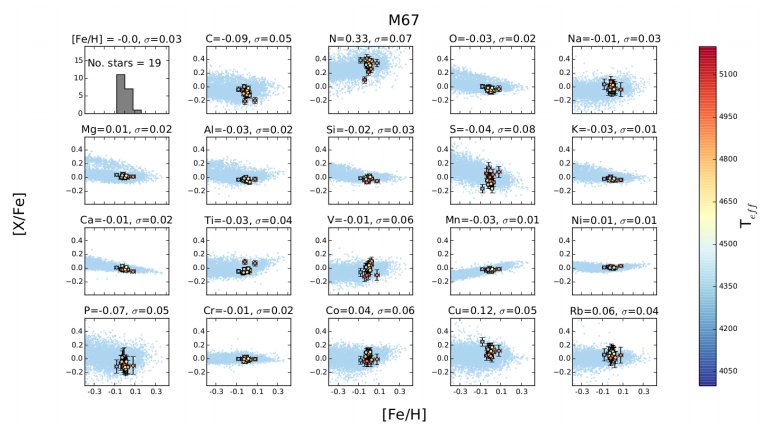 Figure 1: Abundance estimate for 20 elements in M67 stars, coloured by effective temperature. The grey points are the training data. The values at the top of each subplot are mean and standard deviation of the estimates. All elements are measures with respect to Fe, except [Fe/H]. [Figure 5 in the paper]

The results point out that the typical dispersion of abundances among sibling stars is comparable to the measurement uncertainties. This implies that clusters are unsurprisingly nearly homogeneous in their abundances. So there is no need to worry about intrinsic abundance dispersion in chemical tagging analysis, at least in the case of large scale surveys.

Knowing that this dispersion is negligible for the APOGEE’s uncertainties, the authors next estimated the similarity between stars in the same cluster, and between stars in the field. Do stars within a cluster always look alike, in terms of abundance? Do stars in the field always look different? The answer to both these questions is no. The authors showed that by estimating the distribution of abundance differences, through computation of the chi-square for the measured abundances for each pair of stars, both intra-cluster and in the field. They first did that considering stars with similar Teff and log(g), and then also pairs with similar [Fe/H], a measure of metallicity.

As can be seen on Fig. 2, the distributions for intra-cluster pairs and field pairs are very different. The former has a median very close to the number of degrees of freedom, as is expected for a chi-square distribution when a good fit is obtained, confirming that most siblings are a good fit to one another, and thus very similar. There exists, however, some spread, indicating that siblings can be significantly different. The field pairs distribution, on the other hand, has a much larger spread and much larger values. That reflects the fact that field stars are usually not similar. However, about 1% of field pairs are as similar as siblings. The estimated probability that two stars chosen at random were born together is, according to the authors, much smaller than that (about 0.003 %). Thus a significant fraction of these pairs is not in fact siblings, but only doppelgangers: very similar, but unrelated. 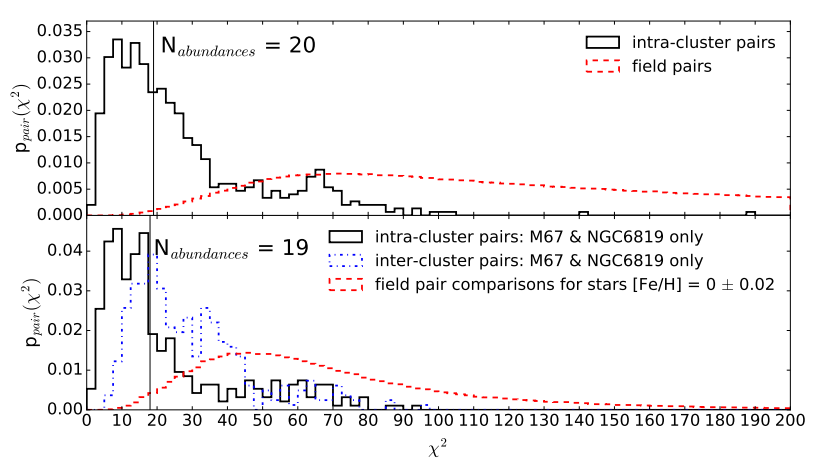 Figure 2: Top pannel shows the chi-square distribution of abundance differences for pairs with similar Teff and log(g). The black histogram represents intra-cluster pairs, and the red-dashed shows field pairs. The distributions are very different, but not disjoint: some field pairs are as similar as siblings. In the bottom panel pairs have also similar [Fe/H], close to the value of the clusters M67 and NGC6819. Their intra-cluster distributions are shown in the blue dash-dot histogram for comparison. Even for similar metallicity, most field stars are distinguishable, but there’s still a considerable number of doppelgangers. [Figure 15 in the paper]

Chemical tagging alone shouldn’t be used to characterize a population, certainly not in the Milky Way disk, not even with the high data quality achieved by the authors. The relatively high doppelganger rate found by the authors, combined with the fact that siblings are not always chemically alike, makes chemical tagging uncertain. Other parameters, such as velocity information, should be combined with the abundance analysis. Keep that in mind!