If you’ve ever taken a physics course, you may have heard the phrase “spherical cow” as a humorous metaphor for the simplifications theorists often use to model complicated three-dimensional phenomena. In today’s astrobite we look at a paper in which the authors test the spherical cow approximation in the context of star-forming molecular clouds using simulations.

Stars form in massive concentrations of cold, dense molecular gas called Giant Molecular Clouds (GMCs). Within these geometrically complex structures, a vast array of complicated physics is at work, including gravity, turbulence, radiation, and magnetic fields. Modern simulations have become incredibly powerful, and are often able to simultaneously model the majority of these processes within GMCs (for example, see this video). For simplicity, the initial conditions in these GMCs are generally taken to be an isolated sphere or box of turbulent gas. However, GMCs are not actually isolated objects, but form, live, and are destroyed within galaxies. They are thus also subject to large-scale forces such as the global gravitational potential, rotation, shear, and feedback from AGN and star formation in neighboring regions of the galaxy. In other words, the true initial conditions of GMCs are set by the galaxy, and certainly do not resemble any regular geometric structure such as a sphere. Unfortunately, there is just no way to practically model both galaxy scales (1000s of parsecs) and star formation scales (< 1/1000 parsec) in a single simulation; the range of size scales needed is just too vast for even today’s impressive computing power*. Thus we have been stuck with spherical cow assumptions for GMC initial conditions. The paper under discussion here attempts to test the implications of these assumptions by combining large- and small-scale simulations. 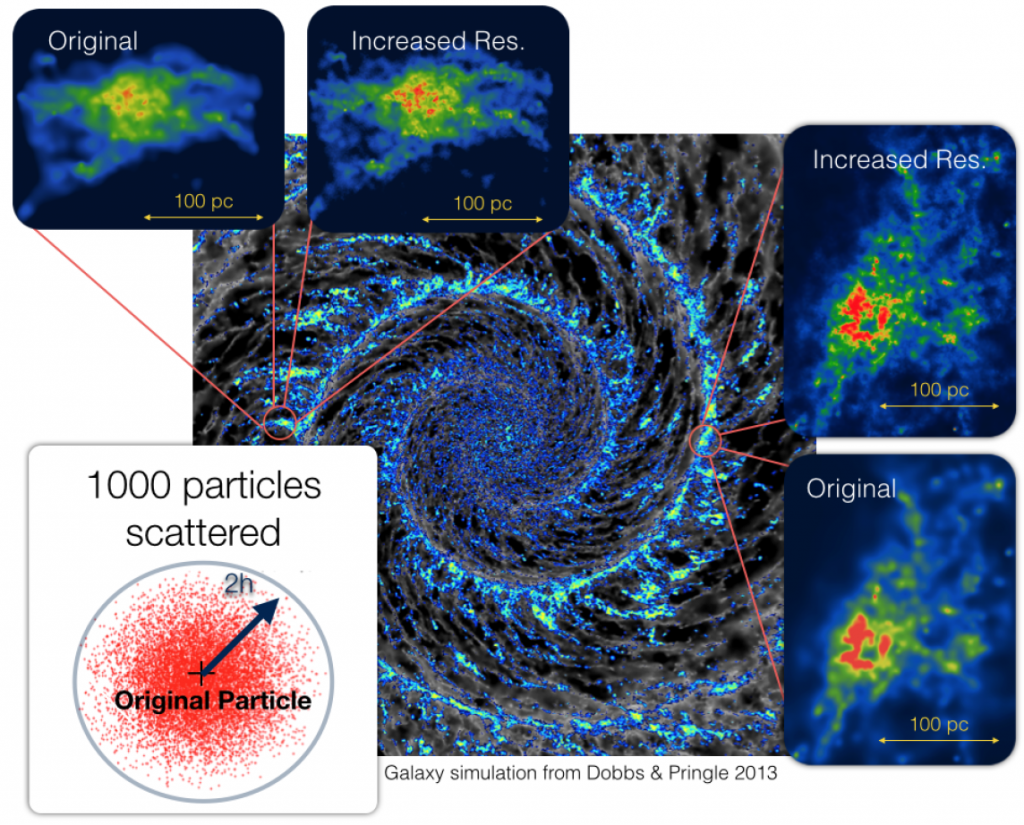 Figure 1: Galaxy-scale simulation (main image) from which two GMCs are extracted: Cloud A (upper left), and Cloud B (lower right). These clouds are re-simulated at higher resolution using a SPH scheme (shown in the lower left inset). Figure 1 from Rey-Raposo, Dobbs, & Duarte-Cabral 2014.

The authors use simulations of galaxies to set the initial conditions for GMCs (see this movie from co-author C. Dobbs). These large-scale simulations show characteristics observed in galaxies like the Milky Way such as increased gas density in spiral arms and a disk structure. The authors then pick out structures within the galaxy that look like GMCs, and re-simulate these at higher resolution, preserving the gas density and velocity structure inherited from the full galaxy-scale simulation. The top-down view in Figure 1 shows the gas column density in the galaxy simulation, and the inset panels show the “clouds” extracted and re-simulated. For all the simulations, the authors used a Smoothed Particle Hydrodynamics (SPH) algorithm, which tracks the motion of individual “particles” having a given mass.

For comparison, Rey-Raposo, Dobbs, & Duarte-Cabral also simulated spheres of gas with physical properties (mass, size, velocity dispersion) set to match those of the GMCs they extract from the galaxy-scale simulation. They then observe the evolution of the “realistic initial condition” clouds as well as the spherical ones and look for differences in the gas density and star formation that takes place. 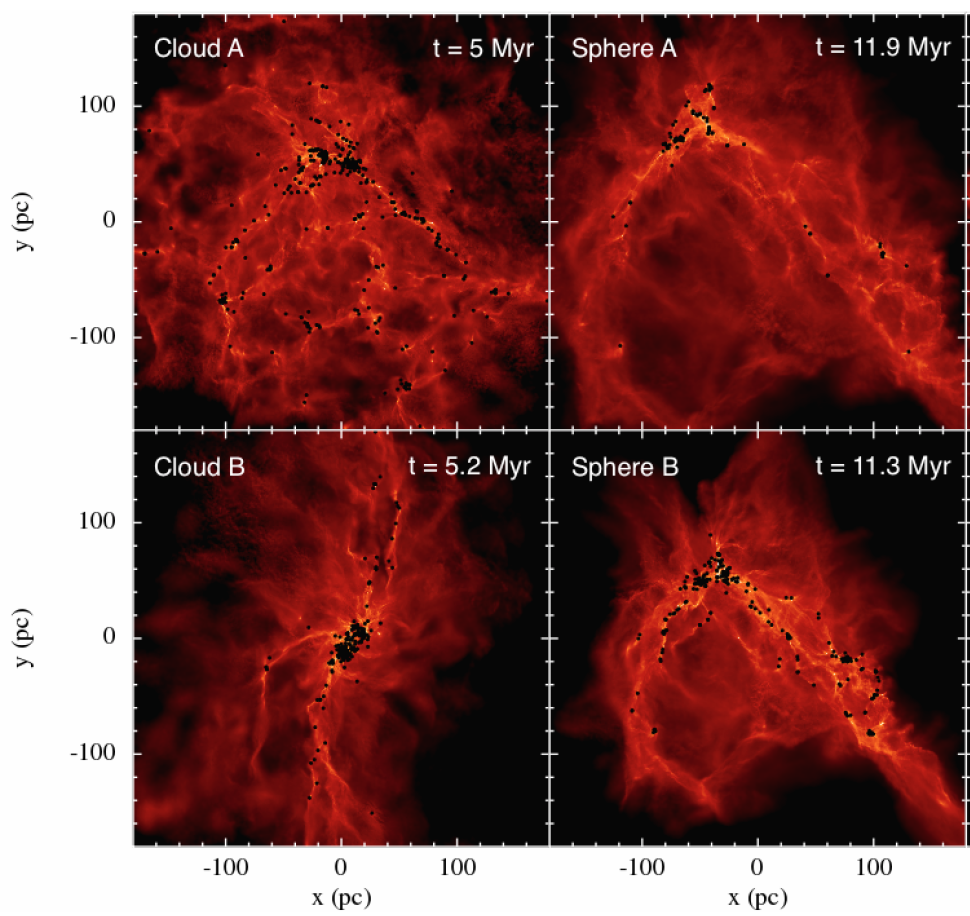 The “real” clouds and simulated spheres show some similarities as they evolve: the overall distribution of the gas density is similar in each case, and the total fraction of gas converted to stars is also comparable. However, their appearances 5 Myr after the first star forms are markedly different (see Figure 2). Note that the Spheres take longer to begin forming stars than the Clouds do, so the total elapsed time is longer. The Clouds, particularly Cloud A, shows much more widespread star formation than the corresponding Spheres. The black dots represent sink particles, which are created in the simulation when the gas density exceeds a high threshold within a small radius — essentially representing the formation of one or a few stars. The main filamentary structures in the Clouds are also aligned with the larger-scale structures within the galaxy (see Figure 1), while the Spheres (unsurprisingly) do not show any correspondence. This shows that context is important: GMCs do not live in a vacuum!

While there are still some physical processes missing from the small-scale simulations presented here — in particular, magnetic fields, and feedback from stars after they form — this paper demonstrates the importance of initial conditions in star formation. It also shows that for certain properties of GMCs, such as the average gas distribution, the spherical approximation is actually not so bad. So while the spherical cow is not reality, it does clearly still serve a role in modeling the complex set of physics at work in our vast universe.

* Here’s a quick order of magnitude calculation that demonstrates this point. If you wanted to resolve 200 AU (~10^-3 pc) scales in a 10 kpc simulation, you would need (105 pc / 10-3 pc)3 = 1024 resolution elements (the cube comes from the three linear dimensions). Within each of these elements you have to keep track of multiple physical quantities, including gas density, three-dimensional velocity, magnetic field direction and strength, and radiation. Storing each of these quantities as double precision requires 8 bytes, so that’s about 1026 bytes needed, or 1011 petabytes of data at each time step. Never mind actually solving the equations of fluid motion (plus magnetohydrodynamics, gravity, and radiative transfer), and the fact that you have to do this at every time step of the simulation, which needs to model millions of years of evolution, and you can easily see why such simulations would not be possible any time in the near future!